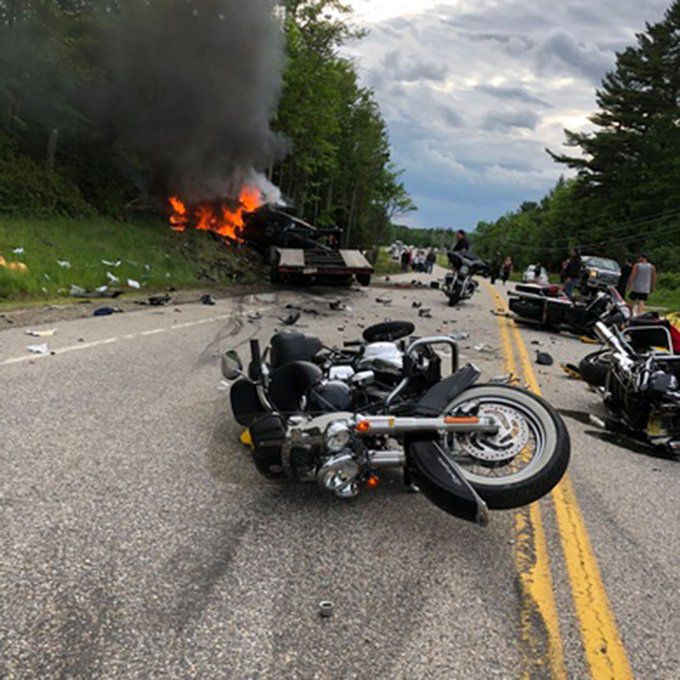 State Highway 2 in northern New Hampshire was the scene of a deadly motorcycles-pickup truck crash Friday night that killed 7 people. 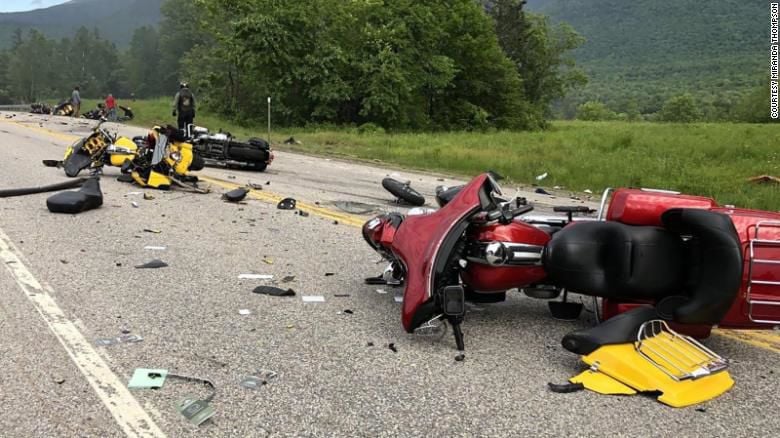 State Highway 2 in northern New Hampshire was the scene of a deadly motorcycles-pickup truck crash Friday night that killed 7 people.

RANDOLPH, N.H. – Grief and a search for answers as to the cause of a rural highway crash involving  a convoy of 10 motorcycles and a pickup truck gripped the scene of the horrific accident in this northern New Hampshire community Saturday.

The deadly crash occurred around 6:30 p.m. Friday on two-lane State Route 2 that winds through the White Mountains region of the state, said Colonel Christopher J. Wagner, commander of the New Hampshire State Police.

“This is one of the worst tragic incidents that we have investigated here in the state,” said Wagner at a Saturday afternoon press conference.

National Transportation Safety Board officials from Washington and New Hampshire Gov. Christopher Sununu also attended the press conference. NTSB safety experts said they are working with  State Police and the Coos County Attorney’s Office in searching for answers to the tragedy.

Authorities said the motorcyclists, members of the Marine Jarheads MC biker club,  were traveling east on the highway, headed for an American Legion function hall in nearby Gorham, New Hampshire, about three hours north of Boston.

The 2016 Dodge 2500 pickup with an attached flatbed trailer was traveling west. The driver was identified as Volodoymyr Zhukovskyy, 23, who was working for Westfield Transportation in Springfield, Massachusetts.

Coos County Attorney John McCormick said no charges have been filed so far in connection with the crash. He asked anyone with video, photographs, or information about the motorcycles or truck before the crash to come forward.

The truck was on fire and billowing smoke when first responders arrived on the scene. Wreckage from the motorcycles were scattered about the highway and grassy sidelines.

Identities of the victims and others involved in the accident were not immediately available. Two of the injured were taken to local Androscoggin Valley Hospital and released. The third was airlifted to Maine Medical Center in Portland, Maine, where he remained hospitalized.

Miranda Thompson, 21, of Manchester, New Hampshire, said she was just a short distance behind the vehicles when the crash happened and one of the first people on the scene.

"You could see motorcycles dumped all over the road,” said Thompson. “You could see people on their phones frantically calling, people pacing back and forth, and just, they were lost.”

She said motorists that came upon the scene “got out of their cars and helped, got blankets and first-aid kits. Everyone went into action and just helped.  There were people putting tourniquets on people, trying to make sure they didn’t move … it was a sad day for all of them.”

A doctor staying at a bed-and-breakfast about 1,000 yards from the scene rushed to help when he learned of the crash from the b&b owner Jerry Hamanne. He said he got a call asking if a doctor happened to be there.

Travis Hood told WMUR-TV in Manchester he was the first person to arrive as a motorist, and stayed with an injured biker until an ambulance arrived.

"I held his hand, and I tried to get him to, I'm like, ‘Squeeze my hand. Stay with me. You're a strong guy. You've got this,’” said Hood. “Toward the end, when the ambulance got there, I could feel him losing strength. I hope he makes it.”

A doctor staying at a bed-and-breakfast about 1,000 yards from the scene rushed to help when he learned of the crash from the  B&B owner Jerry Hamanne. He said he got a call asking if a doctor happened to be there.

Dewald and Christo Steinmann, brothers who co-own the Mount Jefferson View in Randolph said a group of 80 motorcyclists were  staying at the motel, and several of them headed out just after 6 p.m. for the American Legion Club.

Cat Wilson of Cotuit, Massachusetts, who coordinates a charity biker ride on Cape Cod, told the Associated Press the crash sent shockwaves through the motorcycle and veterans communities, which often overlap. She said biker enthusiasts are already organizing to help.

“There’s no tighter community than our biker community,” said Wilson.

A GoFundMe page has been started for the victims, with the message: “Jarheads MC has always been about helping veterans and their families and sadly, today we are in need of that same support.”

The motorcycling community offered their support to the victims. About 50 miles north of the crash site, motorcyclists are gathering this weekend in Columbia, N.H., for the Blessing of Bikes, a well-known event which has been on hiatus for the past four years.

Laura Cardinal, president of the Manchester Motorcycle Club, Inc., said the club is hosting a “blessing of the bikes” event Sunday about 50 miles north of the crash scene. She encouraged motorcyclists from across the state to join the ceremony in honor of the victims.

“They fought for our country. They were out enjoying their life on two wheels and someone took that away from them very unexpectedly and that’s not fair,” she said.

Details for this story were provided by WMUR-TV, Manchester, N. H., and AP.