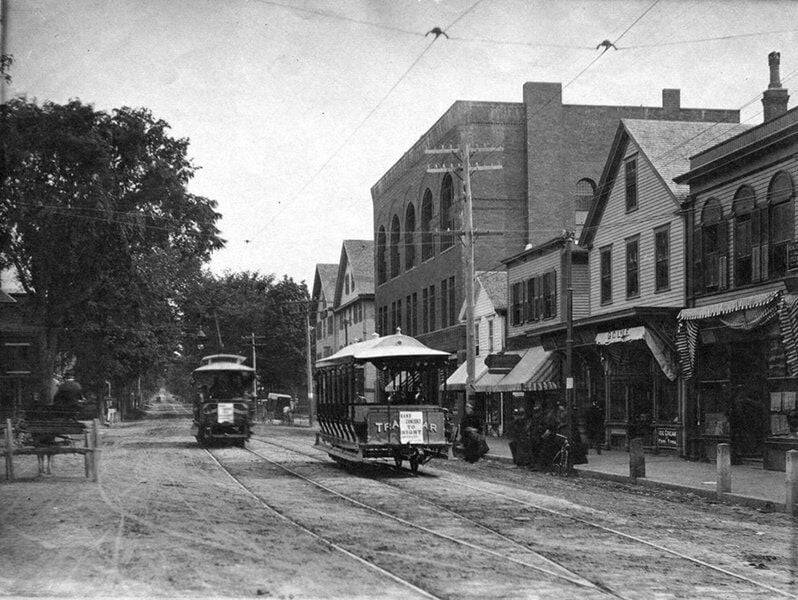 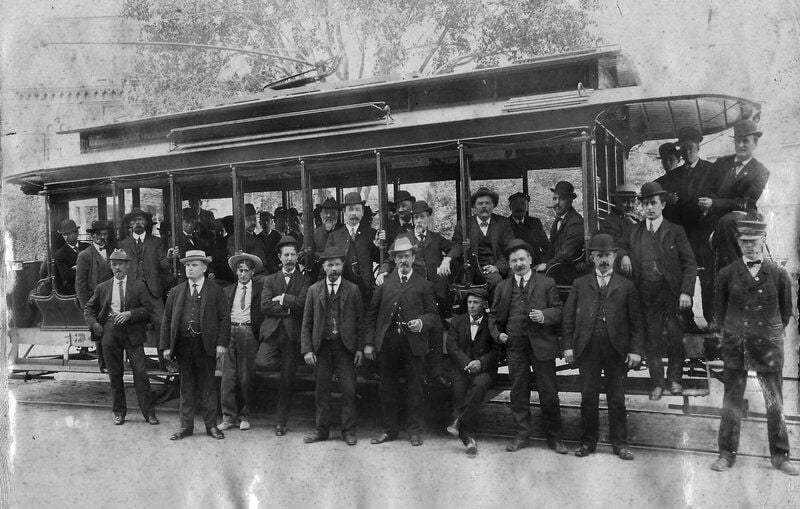 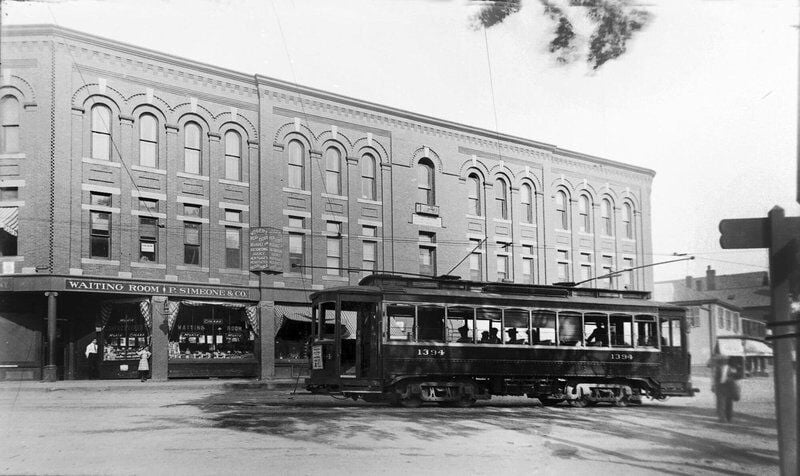 (Photo courtesy Andover Center for History & Culture) A trolley in front of the Waiting Room at the Musgrove Building on Main Street.

(Photo courtesy Andover Center for History & Culture) A trolley in front of the Waiting Room at the Musgrove Building on Main Street.

Imagine stepping out onto Main Street in the early 1900s while taking care not to twist an ankle in the trolley tracks lining the unpaved “Route 28.” The tracks stretched as far as the shops in Lawrence and beyond, and in the opposite direction, up the hill toward Phillips Academy and into Boston.

At Elm Street the tracks veered off to Haverhill. If you had 10 cents in your pocket, hopping on and off a trolley car might certainly be a better choice than a dusty and slow horse and buggy ride to get you where you were going.

The few automobiles that honked and spluttered through Andover then were luxury vehicles, playthings of the very rich, until Henry Ford rolled out his mass-produced Model Ts and As. Trolleys ruled the road, and The Eastern Massachusetts Street Railway Company, in particular, ruled tracks in over 70 communities.

For the most part, trolley cars were reliable if not always comfortable, such as when they were open to the sleeting rain or snow piles on the tracks. There were plenty of daily accidents with trolleys as people jumped on and off the often-crowded cars.

Delays caused no end of griping.

But the trolleys were also a source of great enjoyment.

One of these enjoyments was called the “Big Ride.” This trolley left South Main Street, traveling through Reading, Wakefield and ending up in Haymarket Square.

Its cars were more elegant than the ordinary street cars, “closed” with plush seats and electric heaters. Passengers could read or relax on the one-and-a-half-hour trip into the city.

Trolleys were also famous for summer excursions to places like Salisbury Beach, Salem Willows and Nantasket Beach, as the open-air sides were a welcome relief from hot summer days.

The Railway Company made sure to entice summer business, even to the point of developing Canobie Lake Park in Salem N.H.

Canobie Lake became one of the best-known summer resorts of the time. Families, and young and older couples alike would grab a trolley ride up to Canobie for dancing to big-name bands at the pavilion, lit up against the lake and night sky among the pines.

Taking the trolley back home could also be entertaining, traveling through (wet) Lawrence into (dry) Andover.

But trolley cars soon went the way of the horse and buggy, starting with competition among “jitney” drivers.

As automobiles became more widely available, some entrepreneurial men hired their own automobiles out, much like Uber or Lyft drivers of today. The term jitney was slang for “five cents,” and this was the standard fare charged to deliver people from point A to B, undercutting the streetcars by half while often doubling the speed it took for delivery.

This competition was not going to be suffered lightly by the Railway Company, and calls to revoke the jitney drivers’ licenses soon filled Lawrence City Council meetings, trickling over to the Andover powers-that-be at the time.

The jitney drivers responded by replacing their “usual signs” with signs to throw authorities off, such as “Fine shoe repairing at Andover shoe-shine parlor.”

The trolley service was stopped in reaction to the jitney activity.

It took a Lawrence city ordinance to get the trolleys running again, but this time without the jitney competition, which was so saddled with new restrictions as to be “practically killed.”

The outcome was a victory for trolley travelers, as one of the things the Railway Company agreed to was a reduction in basic fares from 10 cents to 6 cents.

Trolleys were on their last wheels by the early 1930s when buses and autos were becoming the new kings of the road.

Streets were paved, tracks pulled up, and the rest as they say, “is history.”