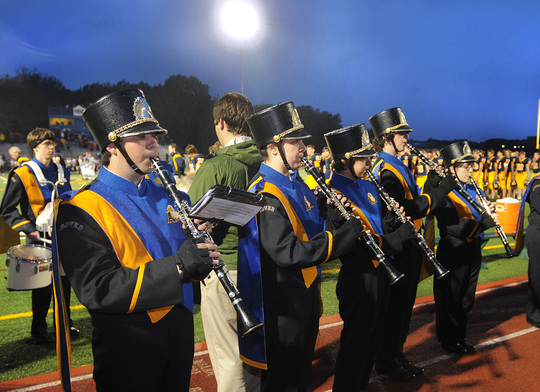 The Andover High School marching band took a silver medal at the 2008 MICCA Marching Band Festival, held on Oct. 26. The band is under the direction of band teacher Joe Wright.

The Andover High School marching band took a silver medal at the 2008 MICCA Marching Band Festival, held on Oct. 26. The band is under the direction of band teacher Joe Wright.

The 41-member band, under the direction of Joe Wright, earned four out of five stars in the Oct. 26 competition, marching with bands from all over the state. At the annual competition, bands are not ranked against each other, but evaluated by judges in five different categories, including music performance, marching technique, percussion and color guard performance.

As a senior, it was "bittersweet" to compete with the band for the last time, he said.

"It was pretty relaxed, I took it like any other show that we do at a football game," said Stapczynski, who plays the tuba. "It was nice to finish up the season (with a silver medal)."

The band has earned a silver at the championship for the last three years, he said. The MICCA championship was held at Cawley Stadium in Lowell.

After taking the field for competition, the band sat together in the stands to watch the other high school bands at the contest. The show ended with a special performance by the Minuteman marching band from the University of Massachusetts Amherst, which has more than 300 members.

After earning the silver medal, the band was "really flying high, really excited," said Donna Hansen, president of the AHS Band Association. "You could see it that day as soon as they got the silver, they were really excited."

The AHS marching band's show is set to music from the 2001 film "A Beautiful Mind." Director Joe Wright arranged three pieces for the band from the movie's themes, Stapczynski said. The music highlights several players in the band, with saxophone and mellophone (marching French horn) solos.

On the field, the band is conducted by drum major Noah Kurinsky, a junior. During the second piece of the show, Kurinsky heads to the field to play the marimba and Stapczynski conducts.

The band started practicing in August and plays at every football game, both home and away. Throughout the fall, the band practices three days a week, Stapczynski said.

With 41 members, the AHS marching band is pretty close, he said, like a family.

"I've made a lot of friends through the band," Stapczynski said.

Although they have plenty of discipline on the field, the band also knows how to let loose, and has plenty of traditions and inside jokes. After they march at halftime at every football game, they circle up around Wright, said Stapczynski. Wright yells an exclamation that sounds like "ous" to the band, and they yell it back to him.

It's a ritual that's hard to explain, Stapczynski said, but it means "good job."