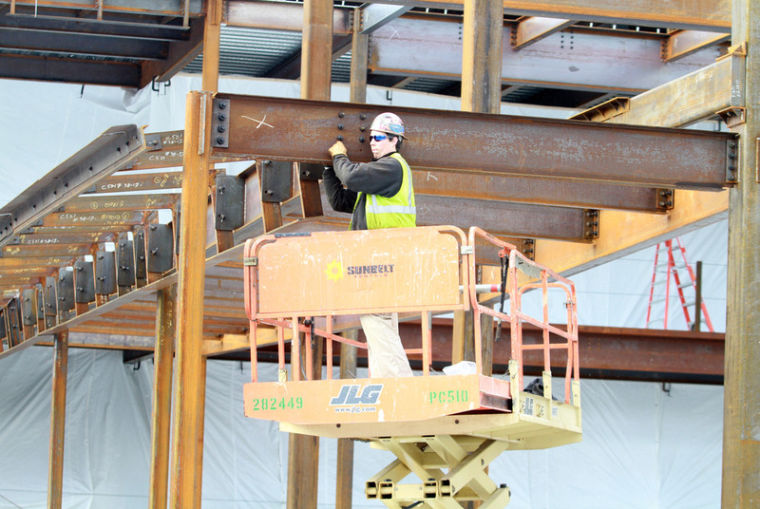 AMY SWEENEY/Staff photo Richard Montgomery tightens a bolt on one of the steel beams as the construction continues at the Bancroft Elementary School. 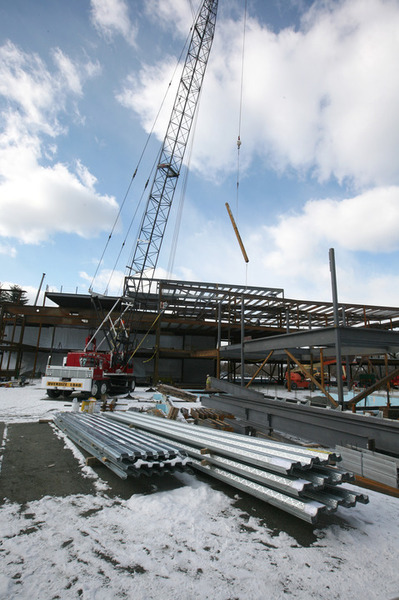 AMY SWEENEY/Staff photo Steel beams are being put up at the Bancroft Elementary School in Andover as the construction continues. The school should be completed in 2014.

AMY SWEENEY/Staff photo Richard Montgomery tightens a bolt on one of the steel beams as the construction continues at the Bancroft Elementary School.

AMY SWEENEY/Staff photo Steel beams are being put up at the Bancroft Elementary School in Andover as the construction continues. The school should be completed in 2014.

The following is a list of future milestones for the new Bancroft Elementary School construction project. Those several months out show what will happen if the additional $5.7 million for construction is approved.

FEB. 11, 2013: Voters gather at Special Town Meeting to either approve or reject the additional funding proposal.

FEB. 13, 2013: Construction continues on the project with or without Special Town Meeting approval, given that current work has already been awarded and financed by prior borrowing. A topping off ceremony is planned to celebrate placement of highest steel beam. Students will sign the beam and watch a crane places it at top of the building.

AUGUST 2013: The building will be weather tight, meaning much of the work ahead will take place within the new school building.

APRIL 2014: The new school will be complete. Students will continue to use the existing, older school building until the end of the year.

OCTOBER 2014: Landscaping of the school grounds, including of the area where the now demolished former school once sat, is completed.

Since the original plan was approved at Town Meeting, the play space that will be available to students has taken a hit.

While the original plan was to have three fields, there will now be one, and playground equipment is no longer included in the current project. If the $5.7 million is approved, about $100,000 will be added back into the plan for a playground.

The number of playing fields at the site was reduced to one as part of a court settlement with abutters. Enough space still exists for two fields, but vegetation will be planted in one area to prevent the area from being used as a youth sports field, as required by the settlement the town reached with those neighbors appealing the project.

The news of the fields reduction sparked immediate concern from youth sports groups around town.

“Some parents and associations who use the fields went as far as they could trying to make (multiple fields at the site) work,” said Lisa Grecoe, president of the Bancroft Parent-Teacher Organization.

Soccer fields weren’t the only issue facing the School Building Committee. Early on in construction, the school’s beloved Dragon’s Lair playground had to be taken down. During early value management work, where items were trimmed from the project to save money, the playground was eliminated from plans in favor of the PTO raising the playground money, according to Grecoe.

“There was a huge, huge stress on the PTO to have to think of paying for a playground, which could have exceeded $130,000,” she said.

Around $100,000 of the $5.7 million the town is trying to raise will go towards building a playground, something Grecoe said she was excited to hear.

There are no current plans to add playing field space to the school, but Maria Maggio, acting director of Plant and Facilities, said adding another field on another part of the site could come up in future town plans.

“Nothing is really going to definitely happen, but it will be a town or school project once the school is completed,” Maggio said.

OCT. 10, 2008: The first public form on the project is held by the School Building Committee. Then Chairman Mark Johnson said the forum aimed to “get as much feedback as we can, early on. There are a lot of steps to be taken, but we’re moving along the grid.”

NOV. 10, 2009: The School Committee discusses the project at a meeting and discusses the possibility of building a larger school and closing Shawsheen School, a choice elementary school serving pre-school aged children and kids from kindergarten to second grade.

MAY 26, 2010: The Massachusetts School Building Authority supports current plans for the school by approving a feasibility study for the project. The project moves into the design phase.

JUNE 3, 2010: West Knoll Road is targeted as the road to be extended, to allow for school bus, parent and teacher access to the school during construction. Planning continues on the project.

AUG. 2011: The School Building Committee announces that ground won’t be broken until 2012 due to delays in the construction permit application process. Meanwhile, the community learns that the school’s beloved Dragon’s Lair playground will be destroyed as part of the construction.

AUG. 17, 2011: The Conservation Commission issues its order of conditions supporting the construction of the West Knoll Road extension. Their vote is necessary because of how wetlands in the area are impacted.

AUG. 25, 2011: Dana Willis, a South Main Street resident, appeals the project’s order of conditions. The next day, the Mann family on South Main Street, operating as MSL Realty Trust, also appeals the project. Their appeals were on the grounds that “there has been no proper evaluation of runoff and related stormwater controls during construction.” Tom Garesché, of West Knoll Road, also appeals the project on Aug. 30. Three more sets of Holt Road residents — Thomas and Jennifer Boshar; Todd Jackson and Caroline Ren; and Thomas and Lisa Williams — also appealed the project on Aug. 30. At that point, Superior Court action is also promised from some of the abutters, on the grounds that the town didn’t follow its wetlands bylaw.

SEPT. 22, 2011: As part of its decision process, the state’s Department of Environmental Protection — which reviews appeals to Conservation Commission decisions — visits the site with neighbors, lawyers and town officials.

DEC. 30, 2011: A Superior Court judge rules in favor of the town in its use of the wetlands bylaw. The DEP also supported the Conservation Commission’s decision leading up to the Superior Court decision, but appeals to the DEP decision takes the matter up to an adjudicatory hearing process at the DEP’s highest levels.

FEBRUARY 2012: As litigation on the project continues, the town drafts two plans to build the West Knoll Road access around problematic wetlands, which would allow the project to proceed despite ongoing litigation. The MSBA later approved the measure.

APRIL 2012: The abutters appealing the project settle with the town in an agreement that regulates how many playing fields can be built on the site and other measures aimed at reducing light and noise on surrounding properties. On the other side, those appealing the project agree to not appeal it again.

AUG. 1, 2012: Bancroft Principal Francis Goldstein retires. She is replaced by newly hired leader Mal Forsman. At the time time, the paved roadway leading to the school from West Knoll Road is finished. The existing driveway on Bancroft Road is restricted to only construction equipment.

OCT. 4, 2012: A groundbreaking ceremony is held on the project, ceremonially launching the school’s long-awaited construction.

NOVEMBER 2012: As bid responses continue to come in on the project, the School Building Committee realizes that the project could be around $5 million off budget due to the earlier appeal-driven delays. As the committee starts working on the numbers, a Special Town Meeting to address the shortfall is suggested as a possible solution.