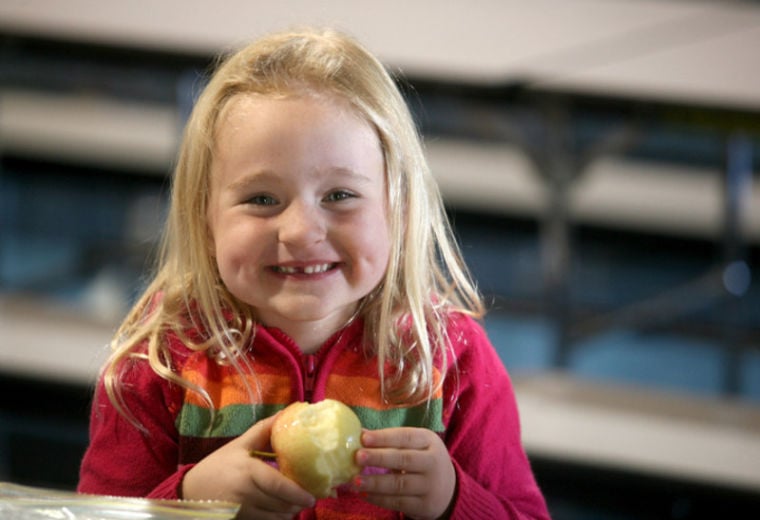 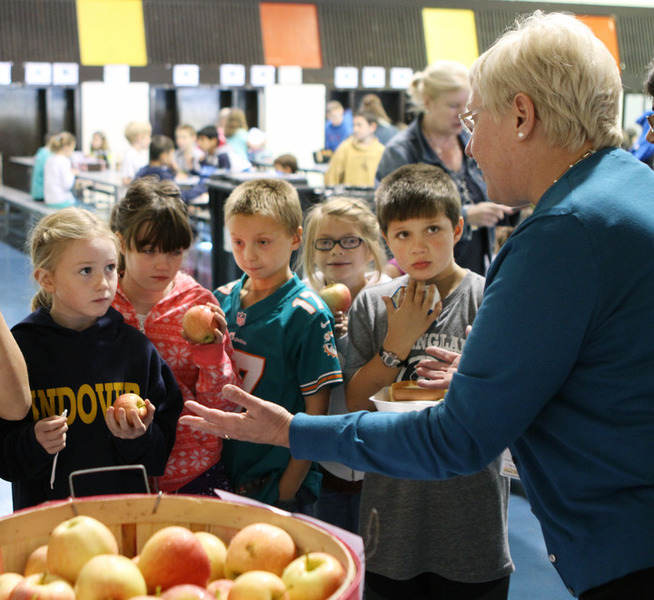 Superintendent Marinel McGrath hands out apples to students at the Bancroft Elementary School last week as part of the district's celebration of Farm to School Week.

Superintendent Marinel McGrath hands out apples to students at the Bancroft Elementary School last week as part of the district's celebration of Farm to School Week.

It was the kind of week where an apple imported from overseas triggered a biting reaction.

Throughout Andover Public Schools last week, health and education leaders took note of not only what students were having for lunch, but where their food was from.

So at a time when orchards throughout the region are churning out apples and pumpkins by the bushel, an apple from outside New England raised some eyebrows.

“I talked to one student. He was eating an apple. It had a sticker on it, and I asked him, ‘Where is the apple from?’” Gail Koutroubas, director of food services, said. “He said New Zealand.”

The educational initiative was part of the state’s Farm to School week and local officials used the opportunity to speak to students about the importance of supporting local farms and how smart food choices can make a drastic difference both in and out of the classroom.

While the town’s schools typically incorporate produce and other crops from local farms into their breakfast and lunch menus, some students aren’t paying as close attention to the origins of the food they’re eating, officials said.

“We have all these great orchards throughout New England, and we’re still importing,” Koutroubas said. “I can see it in the winter, but now?”

In a way, staying local pays itself back, according to Koutroubas.

“It’s important that students realize that it does tie back to the local economy,” she said. “It helps the businesses as well — businesses support the schools through local taxes. It goes full circle.”

The apples were carted in from Donabedian Farms just over the border in Salem, N.H., which draws produce from farms and orchards throughout the region.

The district has been a long-standing customer of Donabedian, which fills a large share of the district’s $5,000 monthly produce budget, Koutroubas said.

“We try to make sure everything we procure is from local sources, which is great,” she said.

But not all of the local food comes from Donabedian. At the high school, a sizable amount of the produce hitting lunch trays is grown right in the schools’ backyard, Ruthy Olney, assistant food services director, said. The on-campus sustainable garden supports a ready supply of heirloom tomatoes, chives, fresh herbs and more, she said.

Olney spent a couple days last week with eight health classes going over food regulations and portion sizes. Together, they celebrated the work of Barker’s Farm in North Andover and Kimball Farm in Westford and talked about the different varieties of apples that exist in New England.

She also treated students to a sampling of native flavors, encouraging them to branch out with tastes of exotic fruits like mango, papaya and star fruit.

Some of the taste-testing even led to proposals for new menu items that could hit the schools in the future, Olney said.

“They gave me a lot of suggestions,” she said. “When we gave them mango, they asked if we can add mango smoothies.”

Life in the school cafeterias returned to normal this week. But that isn’t to say local-sourcing, as Koutroubas calls it, has ended. Koutroubas is a proponent of tapping local sources for whatever is on the menu, even looking to local businesses like Perfecto’s for some baked goods and others for pizza.

“We like to source locally anyway, and the students know that,” Koutroubas said. “We promote that whenever possible.”