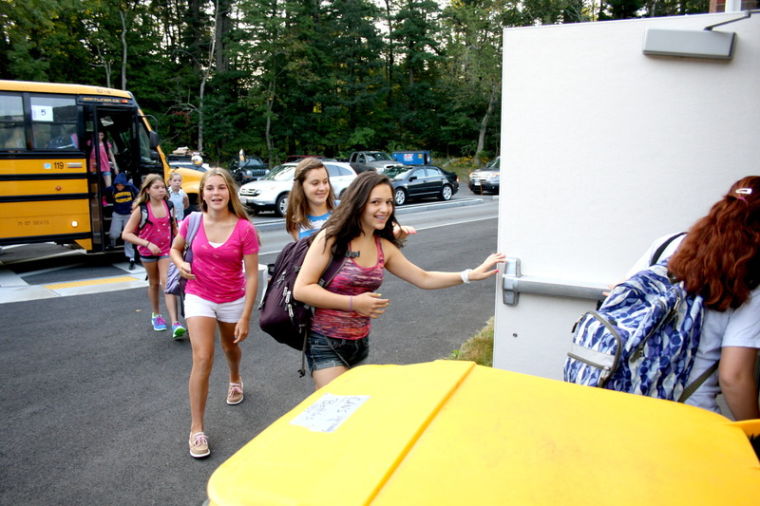 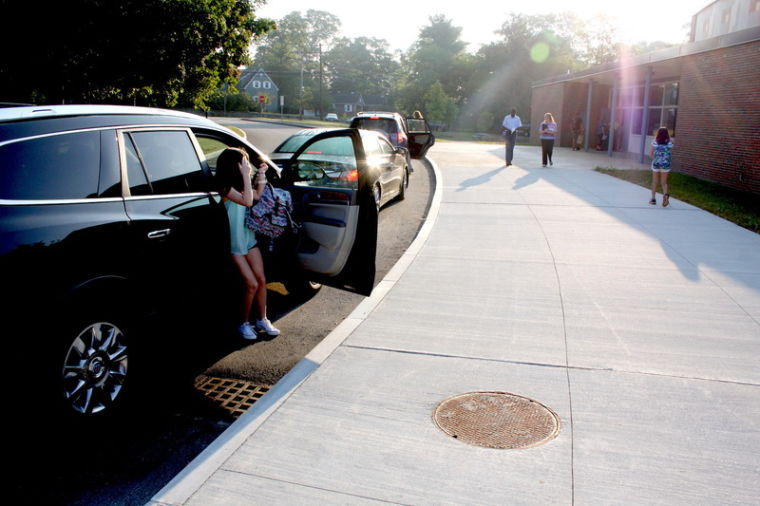 Parents drop their children off in front of West Middle School on the first day of class last week. Despite parents' frustrations with the shortened summer, student attendance was high throughout town.

Parents drop their children off in front of West Middle School on the first day of class last week. Despite parents' frustrations with the shortened summer, student attendance was high throughout town.

The pre-Labor Day start to school may not have scored high marks from all students and parents last week.

But it didn’t deter them from packing backpacks and boarding buses — even if it did mean an abrupt end to summer vacation.

Despite the unusually early return plus heavy construction around two buildings, Andover schools opened without a hitch last Wednesday, Aug. 28, and staff members at the town’s 10 public schools reported a solid turnout.

“We had very good attendance today,” West Middle School Principal Steve Murray said. “There were a handful that didn’t come, and parents let us know ahead of time.”

At Sanborn Elementary School, Principal Patricia Barrett said the school had a few families still vacationing overseas during opening week, but beyond that, “we’re in pretty good shape over here.”

Attendance numbers at all the schools reflected typical day-to-day absences, according to staff. Shawsheen School reported only six of its 110 first- and second-graders absent on the first day of school, while West Elementary School had 17 students missing out of 658 and Wood Hill Middle School had barely a dozen absences.

West Elementary Principal Liz Roos said her students “were pumped to be back.”

“They’re so anxious to meet their teachers,” she said.

Parents were a little less enthusiastic about the early start. A combination of the late end to the last school year and the early start this year limited summer vacation to just nine weeks.

“We didn’t like it at all,” West Middle School parent Lesley Shahbazian said.

The shortened vacation window gave the family “less time to prepare,” father John Shahbazian said. “It’s less time to squeeze in all of the things we wanted to do.”

A $2.5 million project to redo all paved areas around Doherty Middle School that was expected to take four months was crunched into a two-month window to have as little impact on the school year as possible, Ihor Raniuk, town construction project manager, said.

All of the sidewalks, driveways, drop-off areas and parking around the school were resurfaced by the first day of class. More paving will add a second layer of asphalt once construction of the neighboring Cormier Family Youth Center is finished, Raniuk said.

“Everybody was very patient,” Edgerly said last week. “We’ll still be up there for the next few days to make sure everybody is able to go where they need to go safely.”

Meanwhile, construction of the new Bancroft Elementary School has meant access there has shifted from Bancroft Road to neighboring West Knoll Road. Police were on hand to assist with opening-day student drop-offs. But even with the construction, it was business as usual.

“A few new drivers, but I thought it went very smoothly,” Edgerly said. “We gave them a hand with their kindergarten orientation also, but everyone at Bancroft still had it in their mind what they needed to do.”

But next year, for the opening of the new Bancroft, he said, “It will be a whole new ball game.”