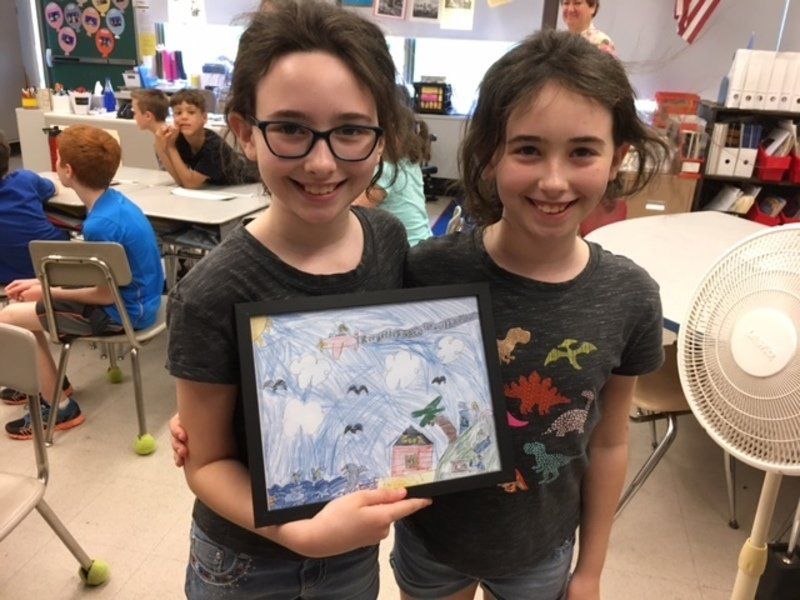 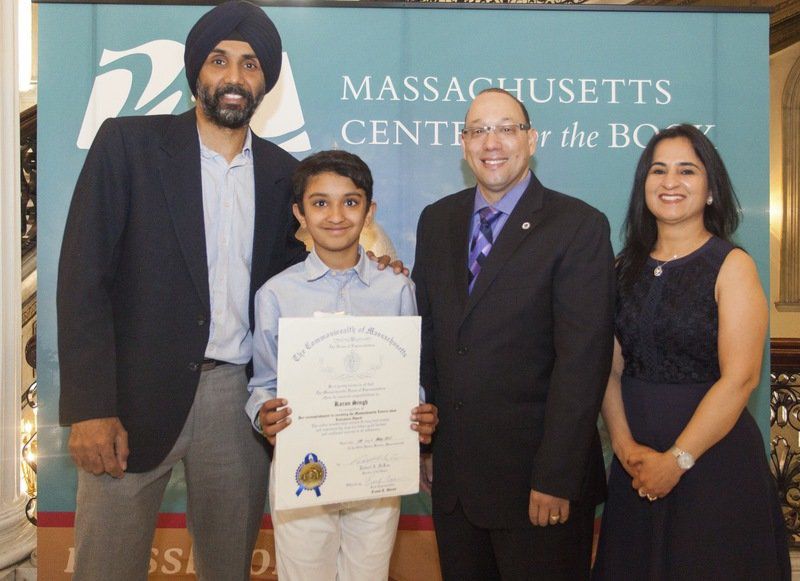 Courtesy photosKaran Singh of Andover, who attends fifth grade at Academy of Notre Dame in Tyngsboro, was recently honored by the Letters About Literature program, sponsored by the Massachusetts Center for the Book. From left to right are: Singh’s father, Hardeep Singh; Karan Singh; Rep. Frank Moran, D-Lawrence; and Singh’s mother, Harpreet Kaur.

Courtesy photosKaran Singh of Andover, who attends fifth grade at Academy of Notre Dame in Tyngsboro, was recently honored by the Letters About Literature program, sponsored by the Massachusetts Center for the Book. From left to right are: Singh’s father, Hardeep Singh; Karan Singh; Rep. Frank Moran, D-Lawrence; and Singh’s mother, Harpreet Kaur.

The Letters About Literature program, sponsored by The Massachusetts Center for the Book, encourages students in grades four through 12 to write letters to an author whose work resonated with them personally, or changed their view of the world.

Karan Singh of Andover, a fifth-grader at Academy of Notre Dame in Tyngsboro, was one of 30 participants in Letters About Literature who were recently recognized at an awards ceremony at the State House.

Singh was honored in the Level 1 category for the letter he wrote to Rick Riordan about the impact of his book, “Magnus Chase and the Gods of Asbard, Book One: The Sword of Summer.”

Three thousand letters were written statewide, making Massachusetts third in the country for participating in this program, which is sponsored nationwide by the Library of Congress.

The Massachusetts judges were led by Cheryl Nixon, chair of the English Department at UMass Boston; Deborah Froggatt, director of library and media services at Boston Public Schools; and Alex Reczkowski, who directs the Berkshire Athenaeum.

The Blueprints, a team of students from Phillips Academy, were recently honored at the state house for their championship performance in the Real World Design Challenge.

This competition for high school students is run by a public-private partnership, which aims to increase the Science, Technology, Engineering, and Mathematics workforce in the United States. The partners provide professional science and engineering and learning resources to students and teachers.

The Blueprints first won the statewide design challenge in January 2017, before competing in Washington, D.C., in April, where they won the national and international competitions.

Their challenge for the latter event was to build an unmanned aerial system that could be used for agriculture. In addition, the students had to design a business plan that assumed the device was successful, and needed to be adapted to deal with new competition and regulations.

Lovely’s whole class participated in the contest after reading “Michael Recycle,” and having conversations about ways to keep the environment clean. These activities tied in with a cafeteria recycling initiative, along with several other projects at South School that address environmental issues.

Lovely’s whole class participated in the calendar contest, and Lynch’s drawing on the theme of recycling was chosen from over 500 entries, and will appear in the company’s 2018 calendar.

Lynch received a small award and a framed display of her work from a representative of the company, at a ceremony where her parents were present.

They both play French horn, and will be featured soloists in a performance of “The Introduction and Polonaise for two French horns in E,” a little-known work by Franz Strauss, the father of famous composer Richard Strauss.

Alexandra plays first horn in the AHS concert band, and is drum major in the marching band. She has also performed with the North Massachusetts Youth Orchestra and studied at the University of Lowell Music camp.

Graduating high school seniors usually play a solo concerto with the Lincoln-Sudbury orchestra in the spring show, but Alex consented to a featured performance on the condition she could play a duo with her dad.

Alexandra will attend University of Massachusetts Lowell in the fall, expecting to study engineering and, like her father, expects to continue playing horn through college and beyond.

The Baccalaureate Service is held for all denominations and honors the class of 2017 prior to Monday night’s graduation ceremony. The service was started over 30 years ago by people who felt strongly about helping young people connect with and appreciate their gift of faith. This year’s organizers hope to see as many of the town’s faith communities as possible represented. For more information, email Philip Giguere at PJGMAG@verizon.net.