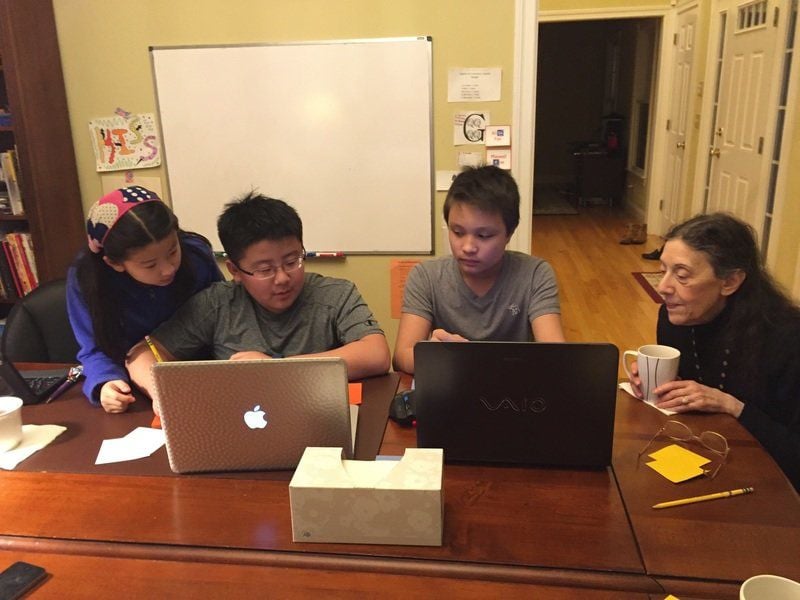 Courtesy photoMembers of the Let's Speak English team go online to speak with students in China. 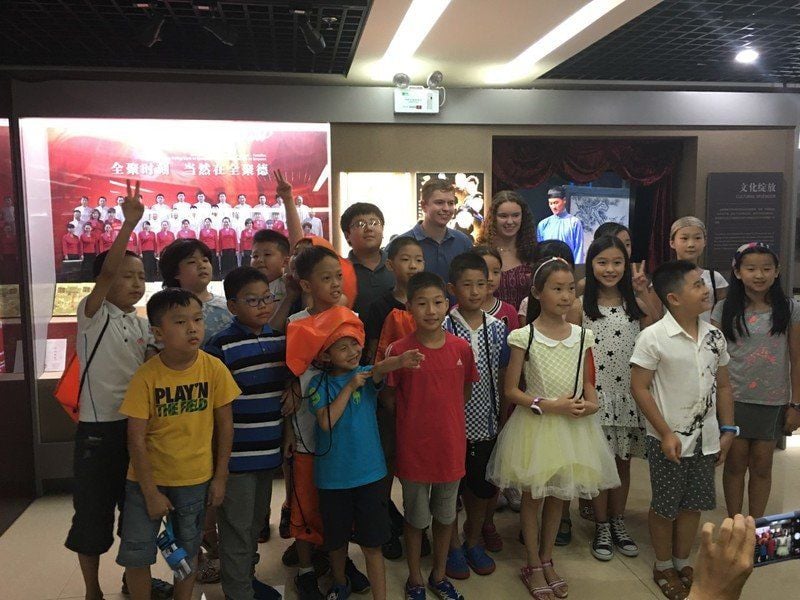 Courtesy photoThe Let's Speak English team on their recent trip to Beijing, China. Max is back row, fourth from the left, and Alice is front row, far right.

Courtesy photoMembers of the Let's Speak English team go online to speak with students in China.

Courtesy photoThe Let's Speak English team on their recent trip to Beijing, China. Max is back row, fourth from the left, and Alice is front row, far right.

As more and more countries are entering the global stage, their citizens are realizing the importance of English, a language that is used all around the world. However, many people don’t have the means to learn proper English in their native country, or to practice English with teachers who know how to fluently speak the language. This is especially true in China, where many people in rural areas don’t have any way to learn the language that could help them so much in their future life.

Max and Alice Fan, two students at the Pike School in Andover, noticed this problem, and decided to step up to make a change. They created Let’s Speak English, a nonprofit organization that helps Chinese kids speak with kids in America to practice their English.

Max said that he first came up with the idea of starting Let’s Speak English two years ago when a family in China came to visit his family in Boston. Upon arriving and trying to talk to their family’s son, who had learned English in China for many years, Max realized that he was shy and not very good at English. However, after only two days of talking with Max, the boy’s English greatly improved and he acquired new vocabulary. Max then realized the potential of this approach. He hoped that this one-on-one opportunity “could be given to others," and so he founded "Let’s Speak English with Alice."

The basis of Let’s Speak English is using a video messaging app, such as Skype or WeChat, a popular messaging system in China, to pair a young teacher in America with a student in China. The two kids have a conversation and talk about their daily life, such as school, friends and extracurricular activities. They also talk about cultural aspects of their countries, such as food, holidays and current events. Max knows that “a lot of classrooms in China are really structured and follow a textbook”, which leaves no room for open discussion. Speaking with an American mentor “helps the kids in China learn how to speak on the spot”, which is “an important skill that can be only be learned through practice”.

Max believes that the nice atmosphere and relaxed discussion helps the students open up, and Alice also mentioned that “the experience that people in America get is very valuable because it gives you leadership skills, communication skills and a lot of different skills that will help you in the future”. Both the students and teachers learn about different places’ cultures, which can be very interesting and add to the fun of the conversation.

The Let’s Speak English team also created a program called the Virtual Classroom, which simulates a real classroom based on the Harkness method. In this method, students from all over China join together on Skype and create a fun story based on a prompt. This encourages collaboration between the students and the teachers, and also gives the students motivation to compete amongst themselves to come up with a better story, helping them use more advanced English and practice their oral skills.

Last summer, Max and core members of the Let’s Speak English team traveled to China to visit the students and discuss more ways to expand the program. Max and Alice thought that it was great that they could finally “get to see the students that [they] had talked to so much during the classes."

They also organized some games to improve the students’ English, and were amazed at how quickly the students got better just by talking to the Let’s Speak English teachers.

Right now there are about 60 teachers and 80 students in the Let’s Speak English program, but there are many more students in China who are eager to learn. Now Let’s Speak English is recruiting more teachers in the U.S. and hoping to spread the program to more cities in China, especially to rural and poor areas where kids need English more than ever to rise out of poverty and improve their lives, as many high-paying jobs require good English skills.

Max is “planning to bring the programs to other schools," such as high school and college, so that Let’s Speak English can grow to help more students in China.

As the program expands, Max and Alice want to make sure that they can “increase the size while maintaining quality." They hope that their program can touch the lives of many kids across China and create global friendships that will last.