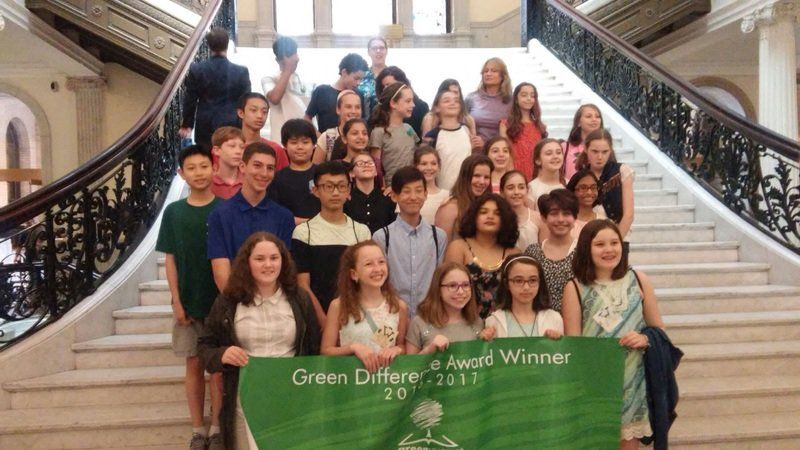 The West Middle School Zero Waste Leaders from grades 6 to 8 attended an award ceremoney recently at the Statehouse. 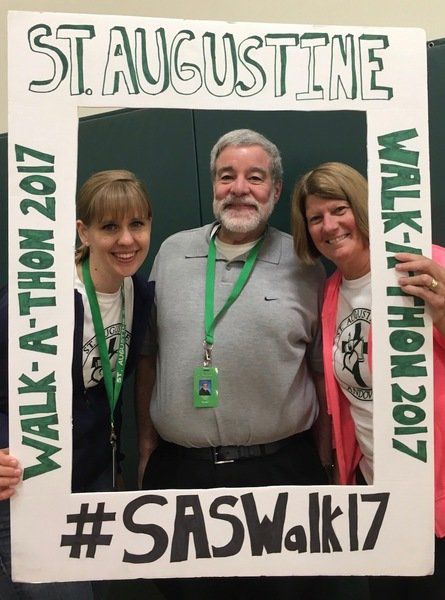 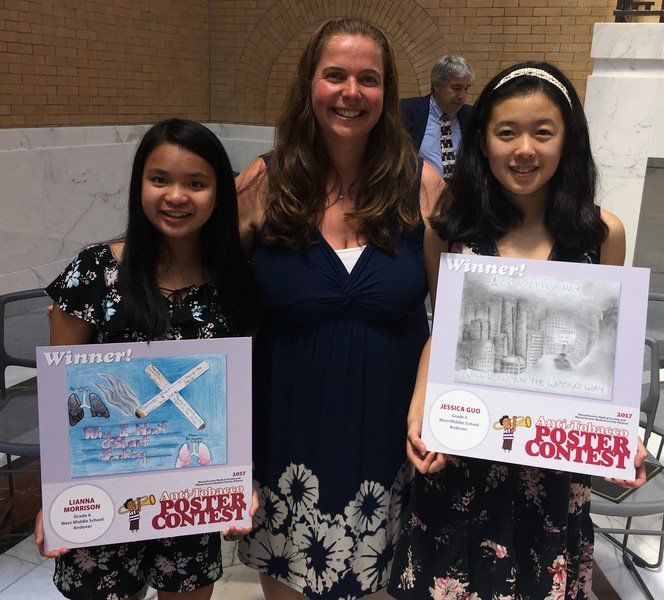 LiAnna Morrison, left, and Jessica Guo, right, both sixth graders at West Middle School, stand with their health education teacher Kelly O'Donnell, center. The girls' posters were chosen to be part of a statewide, anti-smoking calendar. 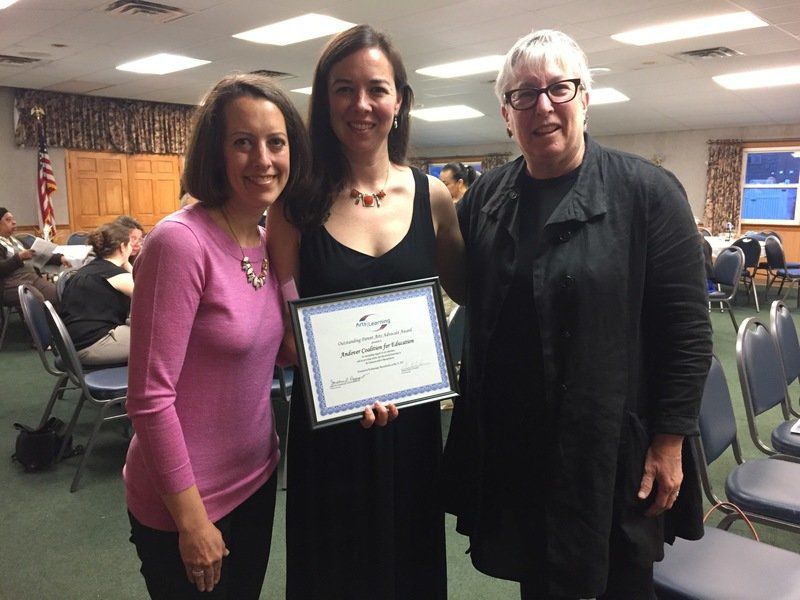 The West Middle School Zero Waste Leaders from grades 6 to 8 attended an award ceremoney recently at the Statehouse.

LiAnna Morrison, left, and Jessica Guo, right, both sixth graders at West Middle School, stand with their health education teacher Kelly O'Donnell, center. The girls' posters were chosen to be part of a statewide, anti-smoking calendar.

West Middle School was chosen by the Massachusetts Department of Energy and Environmental Affairs as the 2016-17 Green Difference Award Winner, for making a difference on environmental issues in their community. Principal Becky Franks was also recognized as an Outstanding Green Principal by a national organization, Project Green Schools.

Franks, parent volunteer Elissa Iwanicki and a group of West Middle School student Zero Waste leaders from grades 6 ,7 and 8, were all honored on Friday, May 19 at the Massachusetts Statehouse in Boston.

The Zero Waste Initiative began district-wide this school year, and West Middle incorporated recycling, composting and food rescue into their school day. Parent volunteers, and student Zero Waste Leaders who oversaw the composting/recycling during lunch periods, had a big impact on the program's success. Since September, West Middle School has also reduced their trash output from 16 bags of trash a day to an average of 2-1/2 bags per day.

Three students from Andover High School, junior George Joseph and freshmen Anuj Sesha and Anurag Nagraj, took first place at the second MetroHacks competition, which was held May 20 and 21 at the Warrior Ice Arena in Boston.

More than 250 high school students from across New England gathered for 24 hours to learn about new technologies, talk with industry professionals and develop skills in computer coding, science and engineering. Joseph, Sesha and Nagraj won for their design of a portable insulin reader, which is intended to keep diabetics from going into hyperglycemic shock.

MetroHacks is the biggest hackathon, or tech gathering and competition, in New England. The event was founded in 2015 by eight Massachusetts high school students who wanted to give high schoolers the chance to pursue and cultivate their passions for computer science and technology.

The event is free, and all meals are provided for students aged 13 to 18, who are all welcome regardless of their level of experience.

Say no to tobacco

LiAnna Morrison and Jessica Guo, sixth graders from West Middle School, were selected as winners from 3,000 entrants in the Massachusetts Medical Society and Alliance Annual Anti-Tobacco Poster Contest. The students submitted their posters as part of a project in Kelly O’Donnell’s health education class, where they were studying the health effects of tobacco. Twelve students were recognized from throughout the state at a ceremony held at the Massachusetts Statehouse on Thursday, June 1. Their posters will be made into a calendar that will be distributed by the Massachusetts Medical Society and Alliance.

St. Augustine School Andover held its sixth Walk-a-Thon on Monday, May 5. The event was started by school parent Lisa Dello Russo as a way for students to contribute to school fundraising efforts, while also stressing the importance of physical exercise.

For the last five years, the Walk-a-Thon was held at The Park, or Andover common, but the weather created safety issues this year, forcing the event indoors at the James D. Doherty Centennial Gymnasium — which was constructed with help from money raised at past walk-a-thons.

Fundraising efforts this year have totaled more than $33,000, which means a sum of more than $200,000 has been raised during all six years of the walk-a-thon. Previously, all the dollars raised went toward construction of the Doherty Centennial Gymnasium. Lead sponsors for this year’s walk included: JB Edward Uniforms, Leonard Orthodontics, Andover Pediatric Dentistry and Biondo & Foley Dental Group of Wilmington.

Founded in 1914 by the Sisters of Notre Dame de Namur, St. Augustine School at 26 Central St. provides a Catholic education to children nursery through grade 8.

Andover Coalition for Education has received the Outstanding Parent Arts Advocate Award from Arts Learning, a non-profit organization that supports the arts in public education.

Over the past five years, ACE has committed two grants totaling $55,000 to fund a visiting artist program in Andover's public schools. For more than 10 years, ACE has partnered with Andover schools to support innovative, system-wide initiatives, which are designed to help students face today’s global challenges. Lenore Price, president of ACE, accepted the award at an awards event held on Wednesday, May 31 in Marlborough.

Cathe Ghandchi, an instructional assistant at Bancroft Elementary School, has organized fifth and third grade students — who share recess time — into a Recess Football League. The league plays two-handed touch football, and has held drafts in the fall and spring.

They are hosting a first annual event on Thursday, June 15 at AYS where fourth graders will be put through a series of training exercises and challenges that are part of the league's Superhero or Role Model Training, before the students enter fifth grade. Ghandchi will also celebrate the season by hosting a barbecue at Bancroft on Friday, June 16 from 5 to 7 p.m. in front of the school.

Heather Belson, whose son and daughter both attend Bancroft, said they are both involved in Recess Football. She said that her son found the league to be a positive experience that helped him get acclimated to Bancroft when he was redistricted from another school in fourth grade.

"Any fifth or third grade student, regardless of gender is welcome to play football or cheer," Belson said. "There are no tryouts, players are assigned teams to be as fair as possible."

Will Broaddus covers schools for the Andover Townsman. To submit items of interest having to do with your school, email Will at: wbroaddus@andovertownsman.com