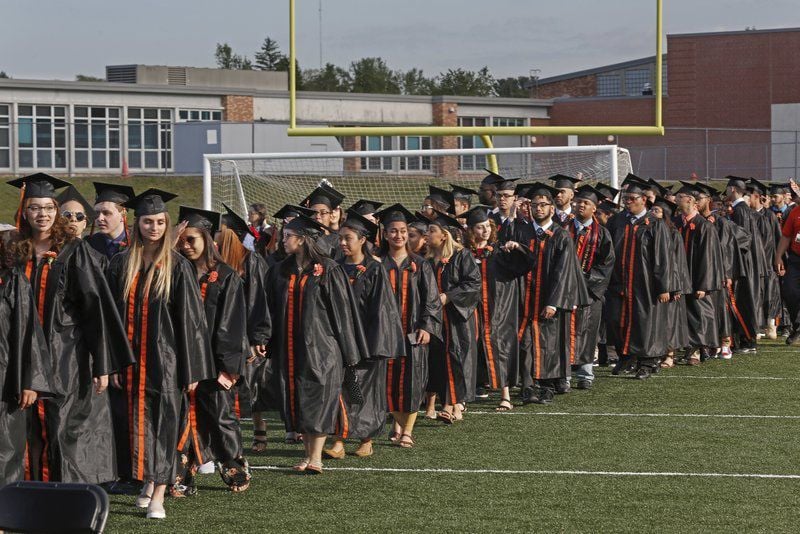 MIKE SPRINGER/Staff photoGraduating seniors walk onto the field Thursday at the Louis E. Gleason Stadium before the start of the 2019 commencement at Greater Lawrence Technical School. 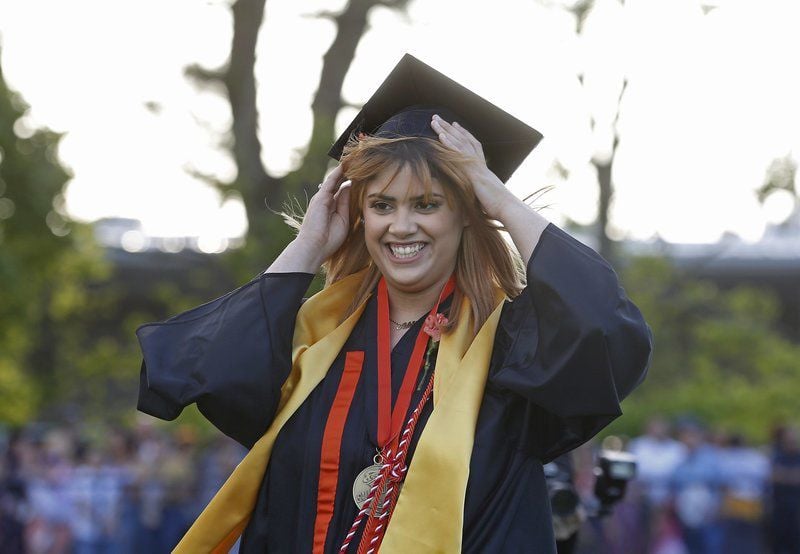 MIKE SPRINGER/Staff photoSalutatorian Ashlin Reyes holds onto her cap after speaking Thursday during the 2019 commencement at Greater Lawrence Technical School in Andover. 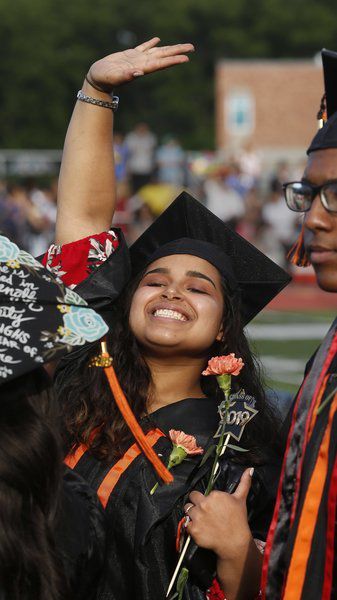 MIKE SPRINGER/Staff photoGraduating senior Genesis Cintron waves to a familiar face in the audience, during the opening procession of the 2019 commencement, at Greater Lawrence Technical School on Thursday night. 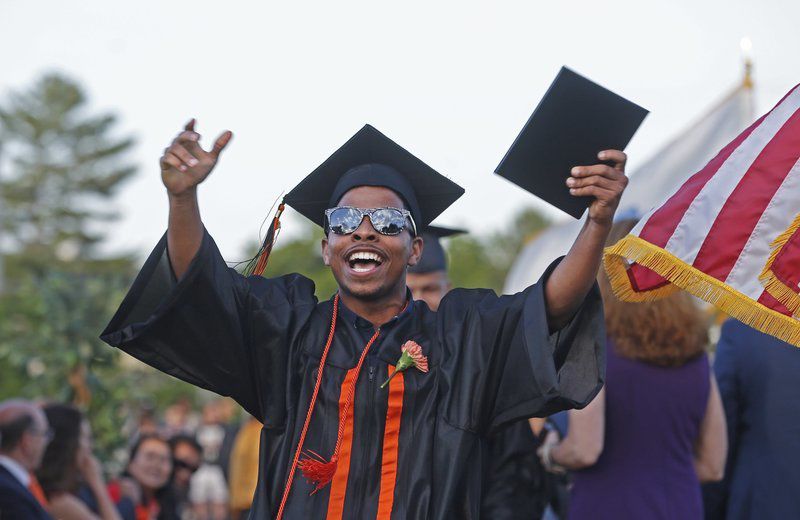 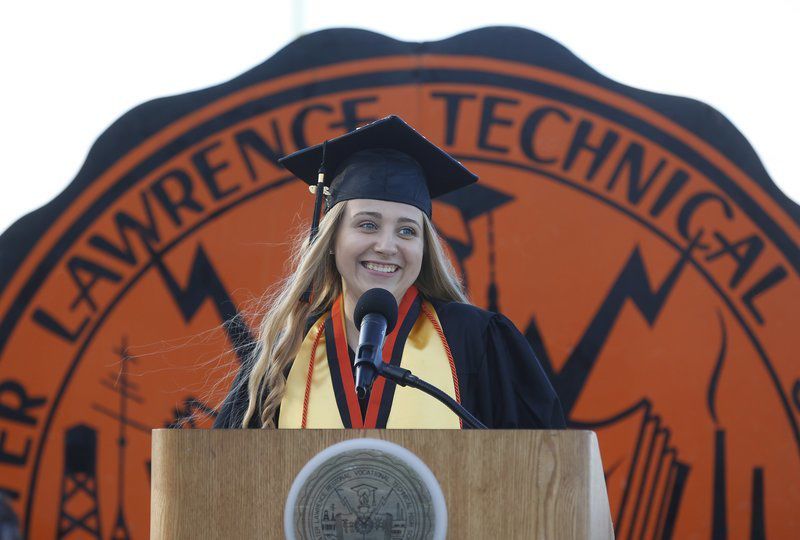 MIKE SPRINGER/Staff photoGraduating seniors walk onto the field Thursday at the Louis E. Gleason Stadium before the start of the 2019 commencement at Greater Lawrence Technical School.

MIKE SPRINGER/Staff photoSalutatorian Ashlin Reyes holds onto her cap after speaking Thursday during the 2019 commencement at Greater Lawrence Technical School in Andover.

MIKE SPRINGER/Staff photoGraduating senior Genesis Cintron waves to a familiar face in the audience, during the opening procession of the 2019 commencement, at Greater Lawrence Technical School on Thursday night.

Melito, of Methuen, was among 327 young men and women who graduated from Greater Lawrence Technical School Thursday evening. Come June 27, he will be initiated into Local 103 of the International Brotherhood of Electrical Workers and begin working as an apprentice electrician.

This young man knows what he’s getting into because he was enrolled in the school’s electrical program. He also worked for Amore Electric in Haverhill during his work/study time.

“I know what I want to do,” Melito said, adding he hopes to earn his electrician’s license by the time he’s 22.

“I couldn’t be prouder,” his aunt, Melissa Pomerleau, also of Methuen, said. “He has worked very hard.”

Melito earned his way into Local 103’s apprenticeship program by getting straight A’s.

Myrelis Rosario, of Lawrence, also knows where she’s headed. She wore a mortarboard with the message, “For success, attitude is as important as ability.”

Rosario was a student in the business technology program. She earned certification in technical computer applications and accounting software – but she will be undertaking a premedical course of study at Pennsylvania State University.

Rosario, who describes herself as a “stubborn person,” said someone chided her for aiming too high, but she is determined to prove the naysayers wrong.

“She has worked hard,” her mother, Myrna Zayas, said. Her father, Hector Rosario, said he has no doubt she will achieve her goal of becoming a physician.

Superintendent-Director John Lavoie, a carpenter by trade who graduated from Greater Lawrence Tech in 1968, stressed the school’s mission of training young people who know what they want to do with their lives.

He asked the graduates and their family members, who filled the stadium bleachers, to imagine a world without carpenters, auto mechanics, dental hygienists, cosmetologists, plumbers, electricians, machinists and other skilled workers.

Toilets would be overflowing, roofs would be leaking, cars and trucks would be broken down and the world would be a mess, he noted.

“What a nightmare!” he said.

Lavoie urged the graduates to “love your work and you will reach your potential.”

Leah Markham of North Andover was the valedictorian for the Class of 2019. She earned a 4.3 grade point average and was enrolled in the graphics communications program.

She plans to major in education at the University of Massachusetts Lowell.

“As I look back at my freshman self I can confidently say a better and more put-together person stands in front of you today,” Markham said in her address. “This change would not have been possible without the support we have received through our Greater Lawrence Technical School community.”

Ashlin Reyes of Lawrence, the salutatorian, earned a 4.26 grade point average. She was enrolled in the cosmetology program and will major in nursing at Salem State University.

She would have had perfect attendance had she not been stranded in Puerto Rico by Hurricane Maria during her junior year. She traveled to Puerto Rico to attend her grandfather’s funeral.

She urged her fellow graduates to look upon overcoming challenges as an advantage.

“Instead of giving up, use that challenge to motivate your inner self and use as the face of a new beginning,” she said.

Rosalin Acosta, secretary of the state Office of Labor and Workforce Development, was the guest keynote speaker. She urged the graduates to take advantage of the strong Massachusetts economy.

The most common plea she hears from employers, she said, is, “Please help me. I can’t find any workers!”

Acosta, who immigrated to the United States with her family from Cuba when she was 4, advised the graduates to be lifelong learners.

“Please make sure your learning does not stop here,” she said.

Eight members of the Greater Lawrence Technical School Class of 2019 are enlisting in the armed forces. Lavoie asked them to come up to the podium to receive recognition.

Breanna Medina and Lineyska Calderon will be joining the Army National Guard.

Elizabeth Freedman, the school’s ebullient principal, told the latest crop of graduates, “We need you to go out there and make things better, starting now.”