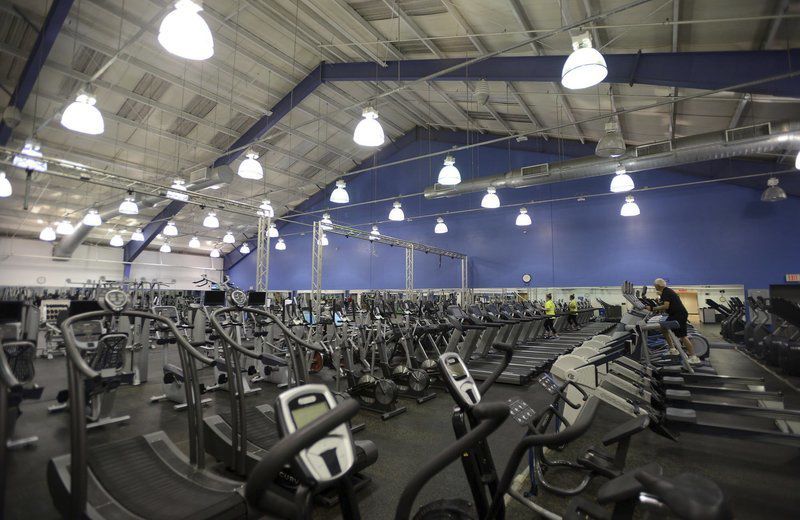 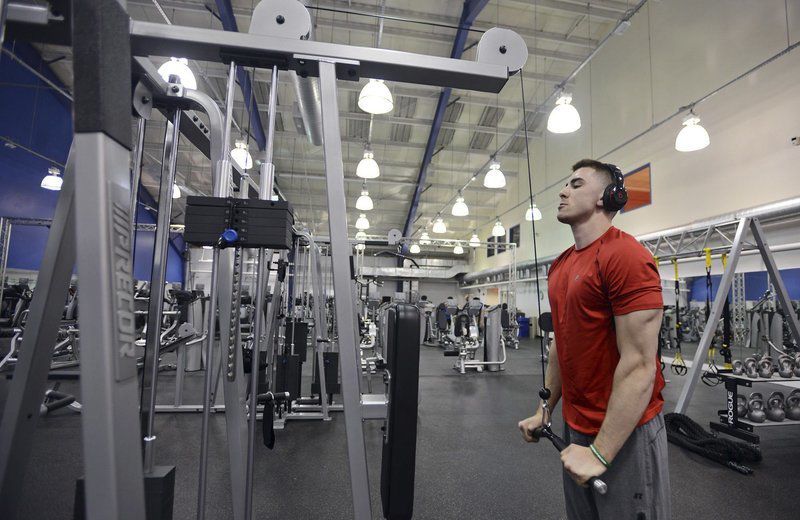 RYAN HUTTON/ Staff photoScotty Curcio of Haverhill works out Monday morning in the fitness center at Cedardale Health and Fitness in its new location in Andover. 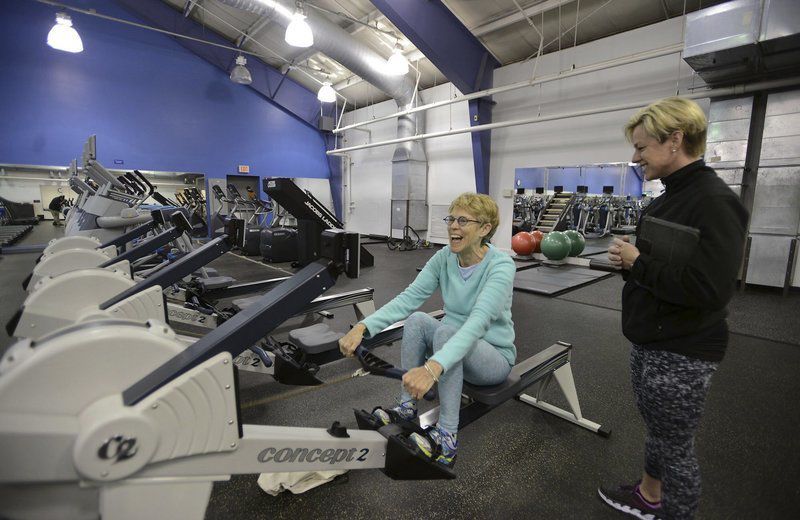 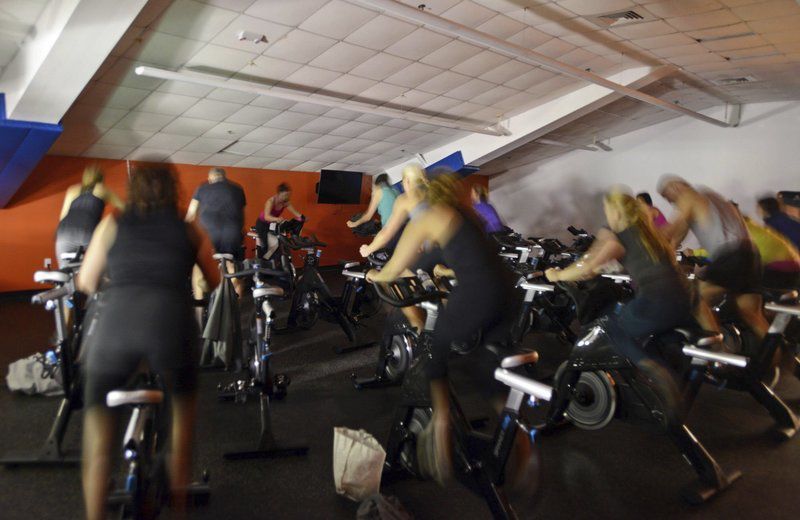 RYAN HUTTON/ Staff photo  A spin class picks up the pace Monday morning at Cedardale Health and Fitness in its new location in Andover.

RYAN HUTTON/ Staff photoScotty Curcio of Haverhill works out Monday morning in the fitness center at Cedardale Health and Fitness in its new location in Andover.

RYAN HUTTON/ Staff photo  A spin class picks up the pace Monday morning at Cedardale Health and Fitness in its new location in Andover.

ANDOVER — People of all ages arrived at the new Cedardale Health and Fitness club Monday morning, dressed comfortably in working clothes and smiles.

And as they walked through the doors of the new facility, located at 307 Lowell St. in Andover, they were greeted with a small reminder of how far the club has come since a March 1 fire devastated the old club, located for decades at 931 Boston Rd. in Bradford.

“Cedardale Stonger Than Ever.”

The simple slogan was printed on one of the grey T-shirts the club had made to commemorate the opening of the new location, and it sums up the resilience of a beloved institution that has served as an integral part of life in the Merrimack Valley since it opened in 1971 in Haverhill.

“We’ve had about 40 or 50 people come in this morning,” said Greg Herbert, Cedardale’s senior manager, on Monday. “We probably have 200 or so members signed up at this facility.”

While the new Andover facility is a far-cry from old,180,000-square-foot Cedardale complex in Bradford — at 49,000-square-feet, it’s slightly smaller than the 52,000-square-foot wing that caught fire on the original building — Herbert said it will ably provide for the club’s members until a new facility can be constructed in Bradford.

“We have four tennis courts. Tennis is very important to the club,” he said of the club’s various youth travel teams and the many tournaments it would host in Haverhill. “Virtually all the equipment is brand new. The TV’s aren’t hooked up yet, but they’re coming.”

As to when demolition of the old building — which suffered between $2 million and $4 million in damage — will begin, Herbert said that will be starting within the next few days.

He added that the club’s owners, the Veasey family, are hoping to open up the Bradford facility’s summer program, complete with outdoor pools, tennis, and a food pavilion.

“That will open sometime in June,” he said.

In addition to the increasing number of members flocking to the temporary facility, Herbert said around 50 of the old facility’s 185 employees have returned to work.

And putting people back to work was the main reason Sal Lupoli, president and CEO of Lupoli Companies, chose to lease the Lowell Street space out to Cedardale, which had been home to a Boston Sports Club branch from 2000 to 2015.

Lupoli Companies purchased the building for $3 million last year, and Herbert said the local business magnate has been of the utmost help to Cedardale in its hour of greatest need.

“The Lupoli Companies have been great helping with lighting, plumbing, mechanical work. I mean, the building hasn’t been used in two years,” Herbert said as he looked out over the 50 or so cardio machines in the main workout area of the facility.

And while he declined to go into details on the lease Cedardale agreed to with Lupoli, Herbert said that it was a fair agreement for all involved parties.

“They could’ve taken advantage of us with the lease, because we were desperate for a space. But they didn’t,” he said. “The town of Andover has been great, too.”

As one walks up the steps of the facility and past walls with freshly dried paint, there is a babysitting station where staff look after children while mom and dad exercise.

Herbert said that many patrons utilized the service at the old Cedardale, and he anticipates it becoming popular again.

Upstairs, 14 people of all ages peddled their hearts out in a spin class as hip-hop music blared from a speaker in the corner of the room.

“That’s Samantha McCarthy,” said Herbert of the instructor running the spin class. “She’s a personal trainer, a nutritionist. She’s like a utility infielder in baseball.”

The new facility is a far cry from the first temporary facility Cedardale opened in the wake of the fire just a short walk down Boston Road in its Cedarland facility.

Gay Tracy, a 71-year-old member from North Andover, who was just readying to work out with her trainer, Kelly Mokeler of Groveland, said she was glad to be out of the first temporary gym, which Herbert joked was a “rustic” set-up.

“It’s my first day here, and it looks great,” said Tracy, who works out with Mokeler for two hours each week. “I’ve been a (Cedardale) member forever and I think people will be pleased.”

Of the 200 or so people who have already signed up at the Andover facility, Herbert said a quarter of them are over 60, not far from the 20 percent he estimated were members in Bradford.

Barbara Vincigarra of Methuen was preparing for a workout Monday morning and remarked how far the new facility had come since last Tuesday.

“When I took an initial tour last week, it needed a little work,” said Vincigarra, who has signed up for spin courses and will do strength work at the gym.

Scotty Curcio, 22, of Haverhill, was excited to get in Monday morning and recalled learning of the March fire that left his gym a shell of itself.

“I work the night shift and I found out in the morning as I driving in after work,” said Curcio, who does HVAC work for the Hussman Corporation in Salem, New Hampshire. “But I love this place and I’m excited for the new equipment. I’ll be here tomorrow.”

According to Herbert, the gym will be soliciting members on how to best acclimate the temporary gym with their routines, wants, and desires.

As for the Veasey family, Herbert said they have been actively involved behind the scenes and are excited for the new facility. But at the same time, they’re looking forward to the summer and rebuilding the flagship location in Bradford.

Among employees, the feeling was one of unadulterated joy Monday.

“It’s great to see members and they’re glad to see our faces,” said Lori McHugh, Cedardale’s membership services director who lives in Haverhill. “The last two months have been such a whirlwind, but to have this up and running, it’s amazing.”

Another Haverhill resident, Mary Lynch, a senior manager at Cedardale, said memories of the March 1 fire still shake her, but that it’s trips to the grocery store that have kept her hopeful she could return to her beloved employer.

“The fire was like a death for all of us, but you couldn’t walk into Market Basket without people hugging you,” said Lynch before summing up the best part of the new gym — the return of a fitness community.

“Nobody missed their treadmill. Everybody missed each other,” she said.