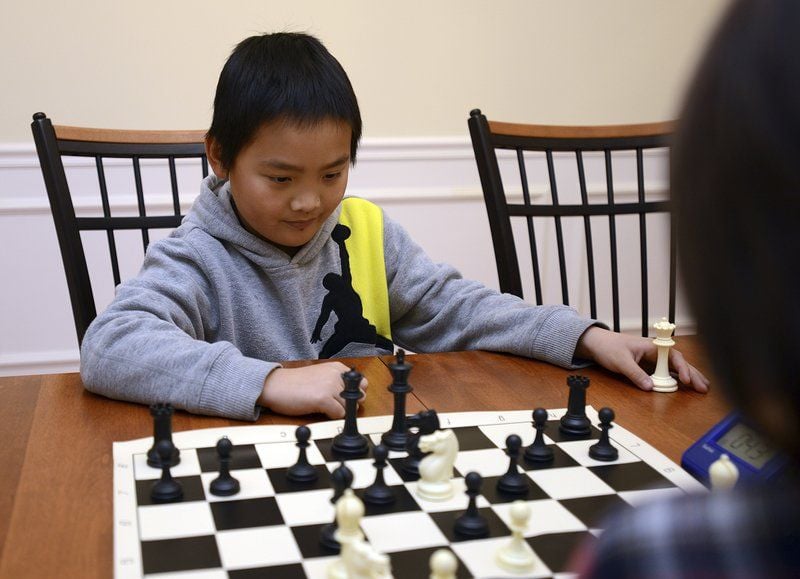 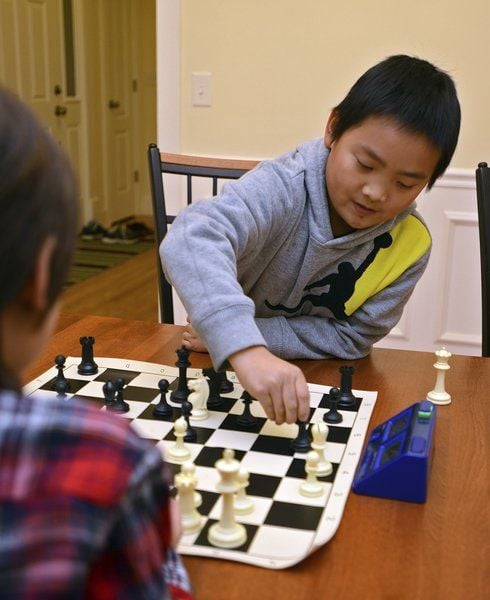 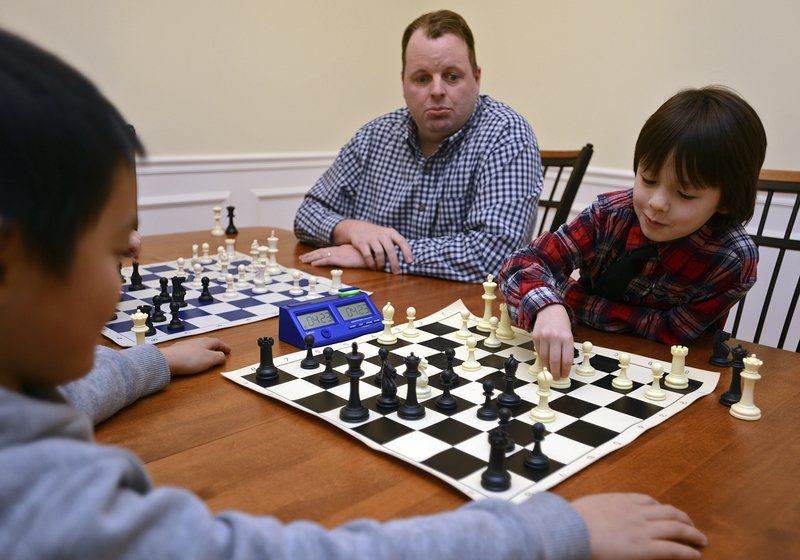 RYAN HUTTON/Staff photoMike Henroid, center, gives his son, Bryan, 6, right, some pointers as he takes on his friend, Aaron Huang, 8, in a chess match. 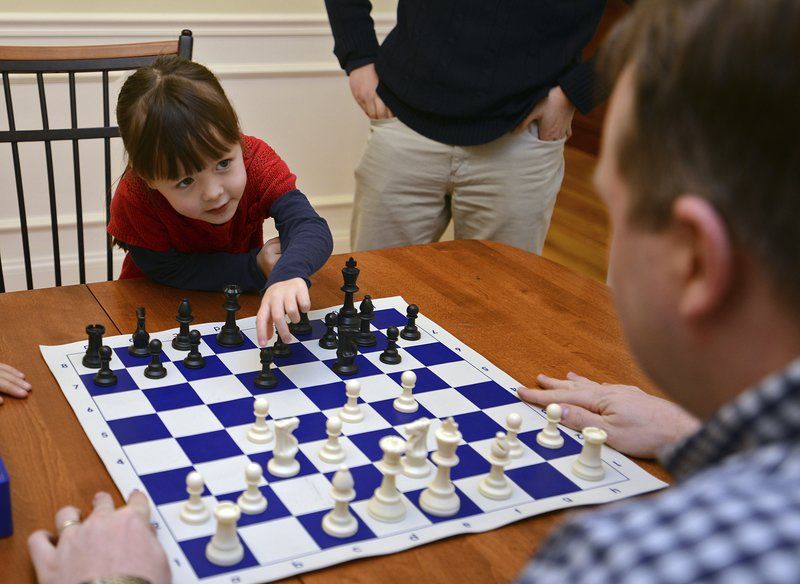 RYAN HUTTON/Staff photoKayda Henroid, 4, looks to her father, Mike, before moving a pawn in a game of chess. The older Henroid is now teaching his daughter how to play the game after her 6-year-old brother took to it. 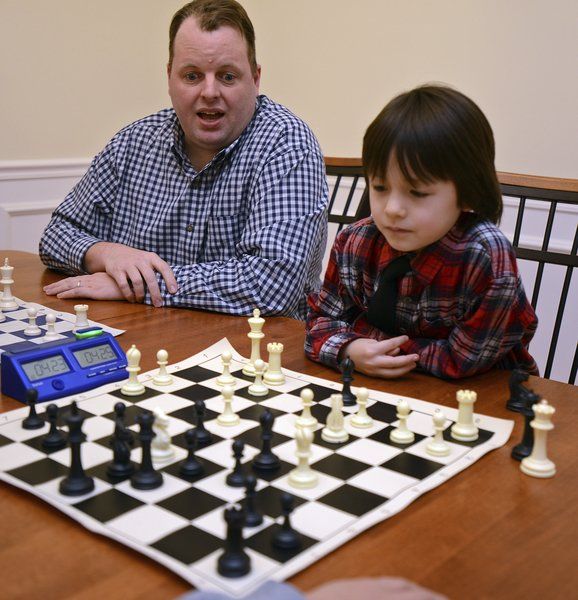 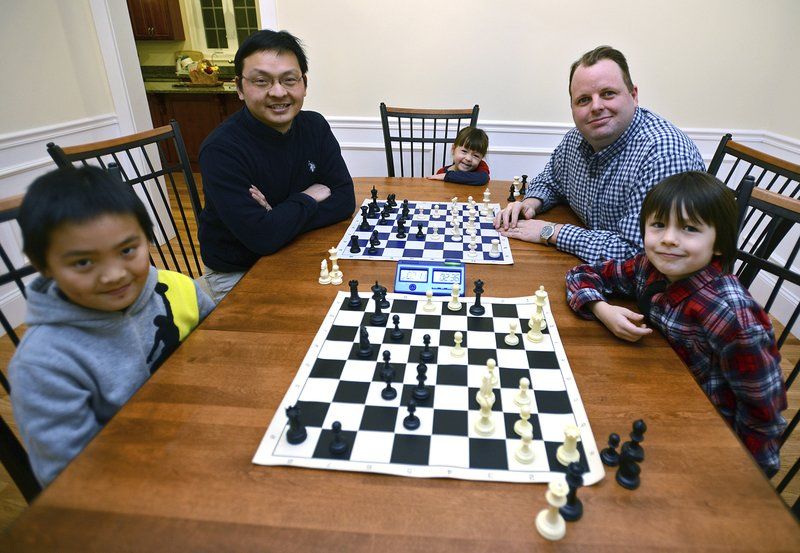 RYAN HUTTON/Staff photoFrom left, Aaron Huang, 8; and his father, Weixing; and Kayda Henroid, 4; her father, Mike, and her brother, Bryan, 6, are looking to get more people playing chess in Andover.

RYAN HUTTON/Staff photoMike Henroid, center, gives his son, Bryan, 6, right, some pointers as he takes on his friend, Aaron Huang, 8, in a chess match.

RYAN HUTTON/Staff photoKayda Henroid, 4, looks to her father, Mike, before moving a pawn in a game of chess. The older Henroid is now teaching his daughter how to play the game after her 6-year-old brother took to it.

RYAN HUTTON/Staff photoFrom left, Aaron Huang, 8; and his father, Weixing; and Kayda Henroid, 4; her father, Mike, and her brother, Bryan, 6, are looking to get more people playing chess in Andover.

Fans of chess insist that it is one of the world’s most popular games, as it is played by millions of people worldwide and is even part of some school curricula.

Those 64 squares arranged in a grid with 16 playing pieces — rooks, pawns, knights, bishops and a queen and king — all moving about certainly has a fan base in Andover, where two well-known national chess champs live and a new chess club has just launched.

Chess passion may now live quietly in town, but the club’s organizer is hoping to capture many local fans of the game.

“They are out there,” Mike Henroid said of chess players in Andover. “When I talk about the club, I don’t hear, ‘Oh, chess, I don’t want to join.’ It’s ‘where, when, what time?’”

So, he’s confident the new Friday night chess club at Faith Lutheran Church on Route 28 will flourish. He’s optimistic, given 25 people turned out for the inaugural club night last week.

“There are (other) local clubs, but I wanted to provide a place to play in Andover,” said Henroid, a newcomer to town. “This is casual, for kids and adults ... It’s an open club available to all.”

Henroid is certainly the perfect person to host the Andover Chess Club. He simply loves the mental challenge of a good chess match. He was on his high school chess team in St. Louis, Mo., and says he has played 100,000 chess games online. He frequents chess tournaments around the state and has written chess columns for the Boston Herald and Denver Post newspapers.

His 6-year-old son, Bryan, a kindergartener at High Plain Elementary School, is already playing chess, and frequently travels with his father to tournaments around the state. His 4-year-old daughter, Kayda, doesn’t play — yet, but is starting to show interest in the game, too. The children were born in Singapore, where Henroid met his wife, Xiaolin “Jade” Jiang. The family moved to Webster Street in town six months ago.

There was little required to get the Andover Chess Club off the ground. He got a grant from the Massachusetts Chess Association to buy 10 chess sets and players were off and capturing the queen before he knew it.

When it comes to chess masters, Henroid is in good company in town.

One of the top chess players in the state lives in Andover. David Vigorito is the fifth highest-rated player in the state and No. 61 in the country overall. He is the author of at least eight chess books.

Vigorito said chess is popular because it “transcends language and culture.”

“Anyone can learn to play and enjoy it for a lifetime,” Vigorito said.

When asked what he likes most about chess, he said there is “a certain harmony to the game.”

“For me, it is like appreciating music,” he said in an email. “Chess has a beauty and depth to it.”

The top-rated girl under the age of 12 also calls Andover home. Carissa Yip, 11, became one of the youngest players to defeat a grandmaster in tournament play, a fete she accomplished this past September.

“Unlike other sports, chess is easy to start,” Carissa, a sixth-grader at Doherty Middle School, said. “It is cheap and so it is accessible to almost everyone.”

She likes it because it’s both a fun and intellectual game, and has been found to bolster academic achievements among students. As a result, many schools, especially those in New York City, offer chess as an after-school activity, she added.

“It challenges your mind and your logical thinking,” she said.

Several of the Andover public schools, including High Plain Elementary, West Middle and Andover High, offer chess clubs through the Learning Leaps programs. The Chinese School of Andover, Step by Step Chinese Learning School, the Russian School of Mathematics and the Kaleidoscope summer program, all based in town, offer chess as well, he said.

Clearly, enthusiasm for chess is capturing Andover. Henroid’s advice for anyone who wants to get in on the action is to join the club and check it out, mate.

Who: Open to all, including children ages 6 and up accompanied by a parent

What: Instruction, casual games and tournaments featuring matches against other area clubs