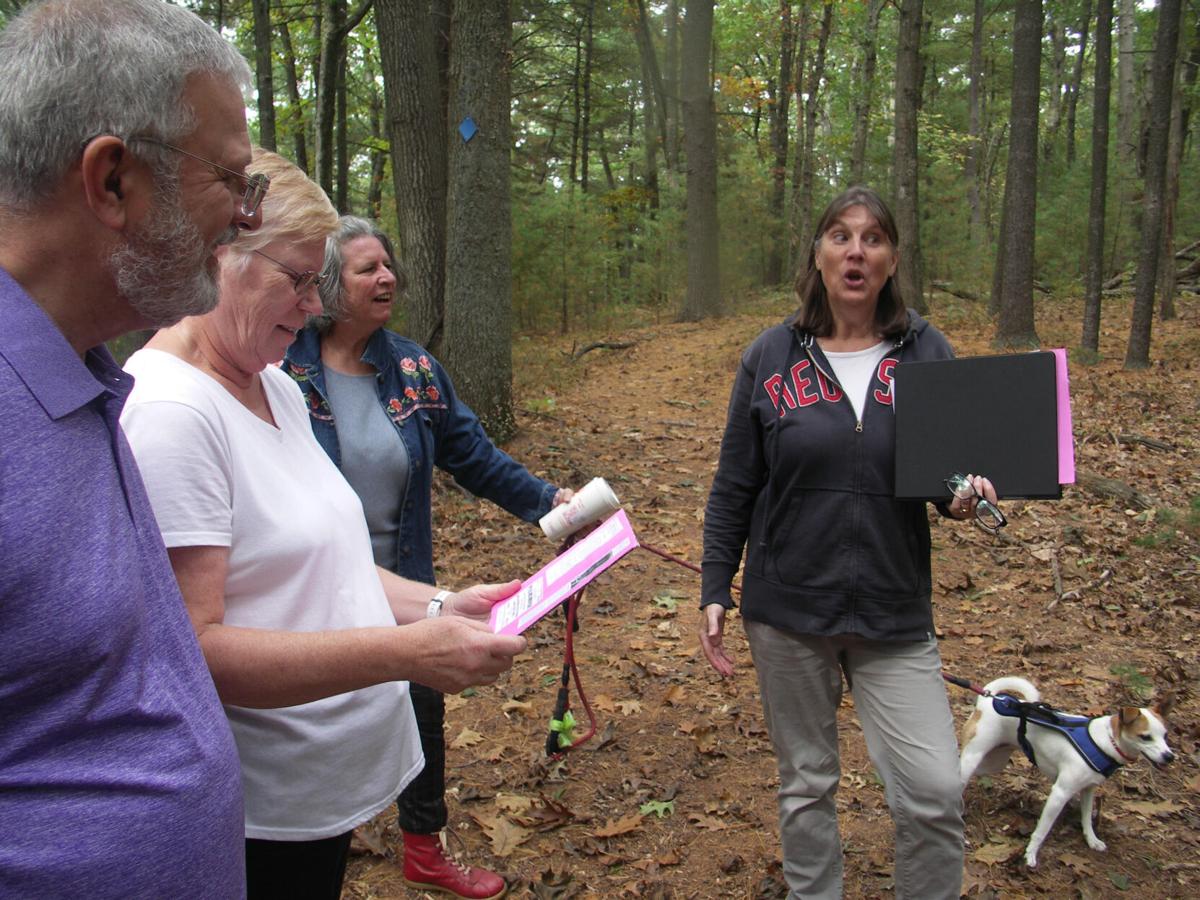 Jane Cairns, right, talks about Pole Hill in Ballardvale with John and Mary Sudol and Cathy Corliss, all of Andover. 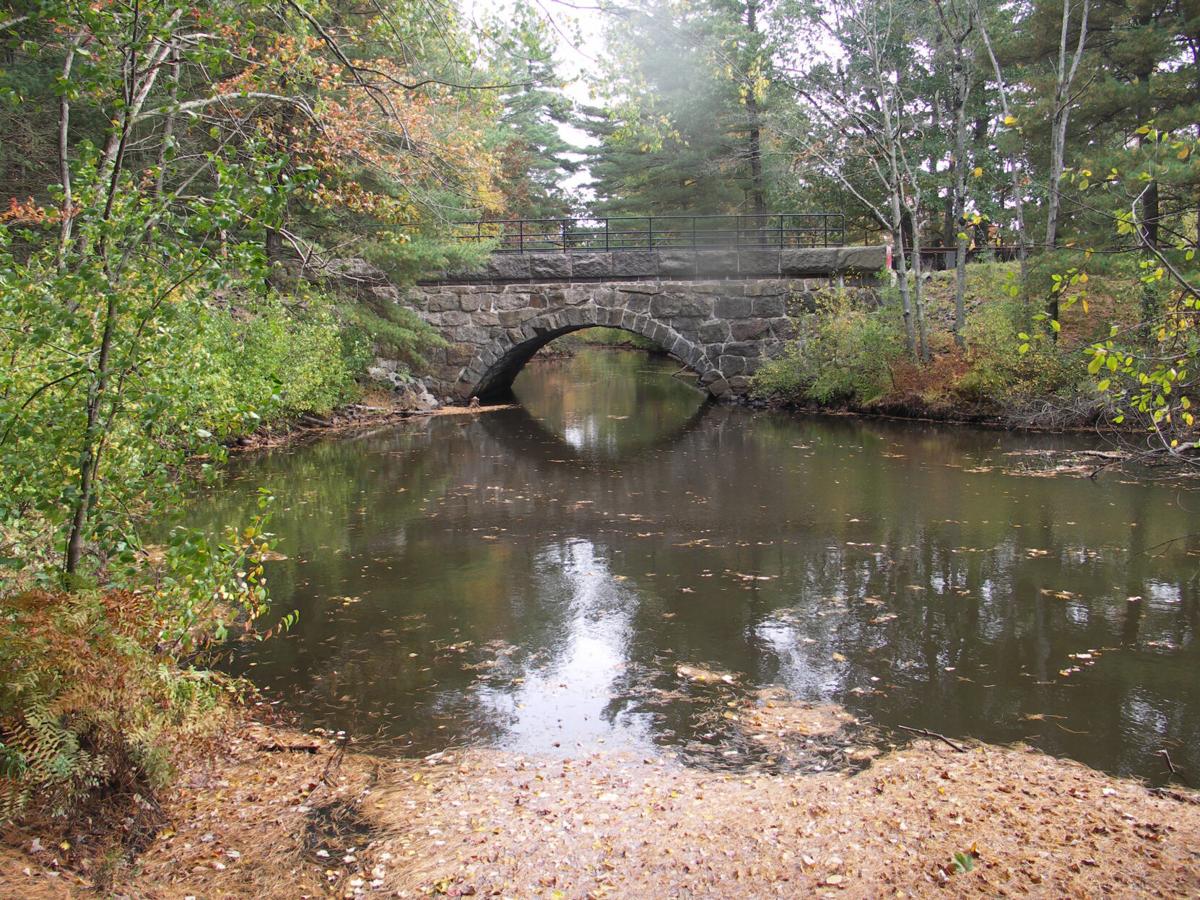 A train trestle goes over the river. It’s been a popular swimming hole over the years, even mentioned in a book by Jay Leno.

Jane Cairns, right, talks about Pole Hill in Ballardvale with John and Mary Sudol and Cathy Corliss, all of Andover.

A train trestle goes over the river. It’s been a popular swimming hole over the years, even mentioned in a book by Jay Leno.

If it was 1880 in Andover and you wanted to party, Pole Hill in Ballardvale was the place to be.

“This was a rowdy place,” said Jane Cairns, president of the Andover Trails Board, who led a hike through the conserved town property on Saturday, Oct. 16.

Owned by the Abbot family since the town’s founding, 208-foot Pole Hill was eventually sold to the Boston and Maine Railroad, which developed it for recreation.

There was a dance hall on top of the hill and a saloon at its base, along with an oval track where meets were held, and shacks that people could rent to spend a few days hunting and fishing in the summer.

All of this is hard to imagine while walking through what is now a forest, on a fall day when needles are swept from pine trees overhead by a steady breeze, and the only things dancing are oak leaves on the surface of the Shawsheen River.

“It’s not a very big reservation, but it’s pretty, and there’s a lot of stories down here,” Cairns said.

That description also applies to the first Ballardvale Day, which included plenty of activities and tours in this southern section of Andover, including the Pole Hill hike.

“It’s basically an opportunity to get out and discover more about Ballardvale, and connect with the neighborhood and hopefully find something new and interesting, and share whatever you have to share about Ballardvale,” said Barbara Burke, a Ballardvale resident who works for the town and organized the event.

Participants in Ballardvale Day included the Andover Center for History and Culture, which organized two history stops near the Ballardvale Train Station and one on the green, while the Andover Village Improvement Society conducted hikes of their Burns and Vale Reservations.

The Andover Islamic Center offered Halloween crafts at their table, and the Shawsheen River Watershed Association and Andona Society shared information about their programs, while the Andover Community Trust promoted their efforts to create affordable housing in Andover.

Diane Derby of The Ballardvale Historic District explained her organization’s attempts to preserve old houses, and also handed out a list of 20 questions asking, “How much do you know about Ballardvale?”

The answer to number one is that the area was named for Timothy Ballard, “who owned a saw and grist mill, blacksmith shop, cider mill and a fulling mill” that was built near the Shawsheen River in 1794. “Fulling,” as the sheet explains, “is a step in the making of woolen cloth.”

Martha Tubinis, director of programs at the Andover Center for History and Culture, explained that the industrial revolution came to Ballardvale in 1836, with the arrival of John Marland.

His father, who was on the board of the Boston and Maine railroad, brought trains to Ballardvale, while Marland revolutionized cloth manufacturing by putting all its processes under one roof.

“He had a vision to build a planned mill community,” Tubinis said. “All the land was subdivided into house and store lots and he began to sell those off in 1847.”

Many of those homes still stand around the green today. But Marland went bankrupt in 1857, leaving his company in the hands of its treasurer, J.P. Bradley, who then made a brand of flannel that was a major success.

“The mills’ fortune rose and fell with men’s fashion of the white flannel pants, and the knickers and the baggy pants called plus fours,” Tubinis said.

While many of the tours reached deep into the history of Ballardvale, they also showed where the past touches on living memory for many people today.

For instance, when Cairns pointed out the train trestle that was originally built across the Shawsheen by the Boston and Maine, she said it has always been a favorite swimming spot for locals.