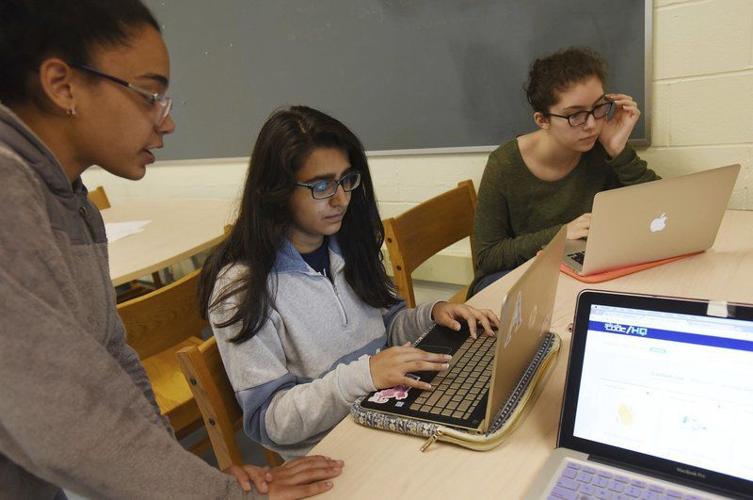 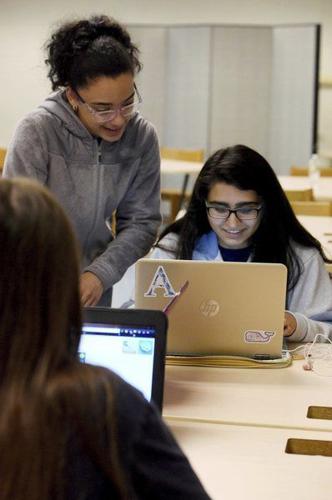 TIM JEAN/Staff photo Ayanna Vasquez, 17, left, helps Anya Chowdhary, 14, as they works on a project during a Girls Who Code club meeting at Andover High School. 10/3/17 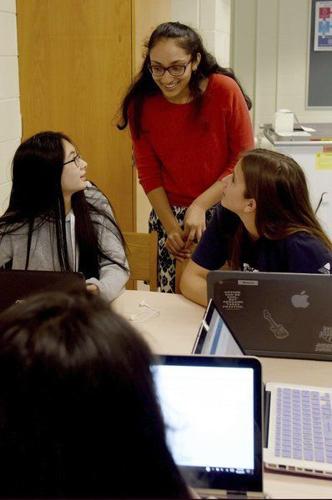 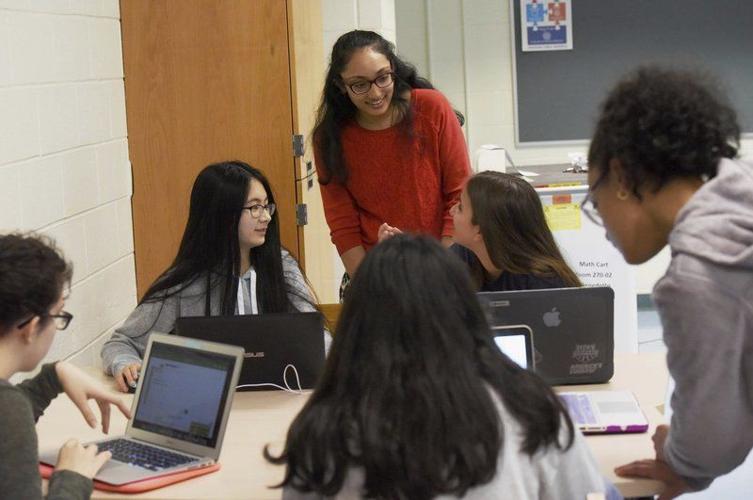 TIM JEAN/Staff photo Ayanna Vasquez, 17, left, helps Anya Chowdhary, 14, as they works on a project during a Girls Who Code club meeting at Andover High School. 10/3/17

In most places, men tend to dominate the world of computer science.

Even at Andover High School.

A determined group of girls are trying to change that.

Girls Who Code, now in its second year as a club, has attracted about a growing group of girls who want to learn the intricate, detailed and fascinating work of computer science and programming.

"Women currently make up less than 20 percent of the tech workforce, which is actually a decrease from approximately 30 percent in the 1990s," said Alison DiBenedetto, a computer science teacher and the GWC club adviser. "This reality coincides with the fact that growth of computer science jobs is projected to outpace almost every other profession for the foreseeable future. Obviously, this means that not enough women are positioning themselves to work in these well paid, interesting careers.  Nationally, it means that we are not tapping almost half of our work force to fill these jobs."

The Andover Girls Who Code club, which held its first meeting of the year in September, is now in its second year. It is part of a national organization whose mission is to "close the gender gap in technology," according to their website.

Founded five years ago, more than 40,000 girls across the country are now members of GWC. In addition to after school programs for girls in grades six through 12, GWC offers summer programs for tenth and eleventh grade students. The program teaches students about coding and computer science and helps young women explore what job opportunities are out there in the computer science field.

"I think the national GWC organization has done a great job of recognizing the scarcity of women in computer science and has quickly become a national force to address this issue," DiBenedetto said. "They have developed a curriculum for clubs to use nationwide and have partnered with software companies in major cities in the U.S. to offer immersive summer experiences for high school girls."

She added that the club, despite its potentially intimidating subject matter, is actually a lot of fun.

"The GWC club at the high school is very low pressure and is a good introduction to not only programming but the role of computer science in society," DiBenedetto said. "It is not necessary to commit for the year.  The delivery of the instruction is online and self-paced so it’s flexible to accommodate seasonal commitments such as sports or other obligations.  Exposure to the club may help a student decide if she wants to take a computer science course in the future."

Eighth grade girls are also welcome to join the club.

Last year, between 10 and 12 girls attended weekly meetings at Andover High, and five girls came when their schedule allowed. Thirteen girls attended the most recent meeting on Sept. 26. According to co-president of the club, Trisha Ballakur, several more have expressed interest since.

"I started the Girls Who Code Club at Andover High last year in response to a startling statistic: there were only 10 girls out of 93 students total in the three advanced Computer Science classes that the school offers last year," Ballakur wrote in an email. "Having a love for computer science that began after taking the Intro to Programming class by chance at AHS the year before, I was shocked by how deeply the gender gap in technology penetrated my own community. Because I had fallen upon programming by mere chance, and learned to absolutely love it, I wondered how many other girls could have had the same experience if they gave it a try."

DiBenedetto teaches two AP Computer Science classes. One class of 21 students only has five girls, another with 23 students has two.

"Obviously the role of GWC is to address the gender disparity in computer science," DiBenedetto said. "I think it’s worth noting that there is an unfortunate lack of diversity across the board in computer science.  African Americans and Hispanics are also very much underrepresented in this field. This is an issue not just because these are great jobs but also because computer science is playing a role in revolutionizing many of our industries.  Computer Science has the potential to solve some of society’s most complicated problems but it will take a diverse work force to ensure our diverse population is served."

"My favorite part about GWC is hands-down the CS Impact Project that we do a couple months into the club," Ballakur wrote. "The CS Impact Project gives the girls an amazing opportunity to use their knowledge from the Activity Sets to see how Computer Science can be used to solve social problems in their community, which is my favorite way to look at and use computer science. Overall, I definitely think that this part of GWC exposes girls to the immense possibilities CS can solve, and it also helps to build their confidence in seeing that they can actually create a huge solution with their own knowledge and for their own community."

DiBenedetto said many girls will have the same experience that Ballukar had. That is, if they give computer science a try, they might really like it.

"The biggest obstacle seems to be convincing girls to take their initial CS course," she said. "Girls that elect to take an introductory programming class are choosing to continue on to the more advanced CS classes at the same rate the boys are. Many of these girls who are now in college majoring in computer science had told me that they took programming on a whim and did not think they were going to like it.  They assumed that they would find it boring and were surprised by how challenging and engaging it was."