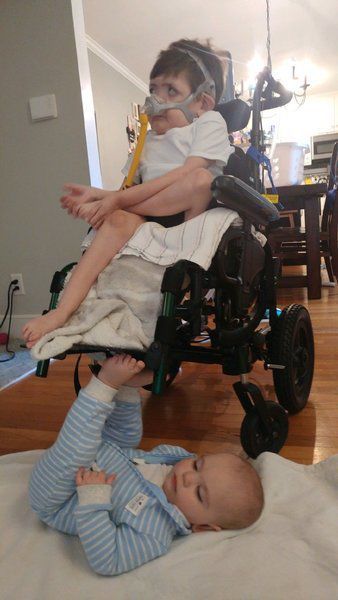 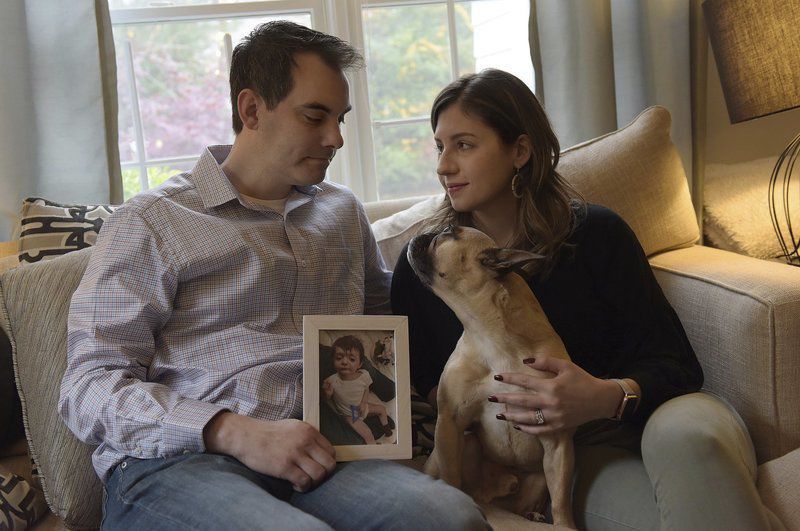 TIM JEAN/Staff photoNathan and Lynette Elam of Andover sit with their dog Bernie as they hold a photograph of Anderson "Andy" James Elam, 3, who died peacefully in his mother's arms Tuesday, Oct. 22, 2019. Andy was born with Neonatal Marfan Syndrome.

TIM JEAN/Staff photoNathan and Lynette Elam of Andover sit with their dog Bernie as they hold a photograph of Anderson "Andy" James Elam, 3, who died peacefully in his mother's arms Tuesday, Oct. 22, 2019. Andy was born with Neonatal Marfan Syndrome.

Not even the harsh grinding of coffee beans in the kitchen can mask the silence in the Elam's home after the death of their 3-year-old son.

Anderson James Elam, or Andy as he was nicknamed, spent his short life with Neonatal Marfan syndrome. He came to rely on constant oxygen from a supply of tanks stored in the mudroom.

The hum let out by the machine at his side was a comfortable reminder for his parents, Lynette and Nathan Elam, that he was nearby.

Andy died on Oct. 22 in his mother's arms during one of a many stays at Boston Children's Hospital. The progressive genetic disease became too much for his lungs, and he could no longer exhale deadly carbon dioxide naturally produced by his body.

Experts say Neonatal Marfan syndrome, the worst end of the Marfan syndrome spectrum, presents at birth with inward and outward medical challenges. Lynette Elam, an attorney, can rattle off statistics about it as if trained in nursing.

Life expectancy is a year or two, she explained. In Andy's case, the mutation was spontaneous, meaning he didn't inherit it from either parent. That's how it goes for a quarter of all babies diagnosed with Neonatal Marfan syndrome.

There was no hint of Andy's diagnosis until medical professionals first laid eyes on him.

As his parents talk about him over coffee in the living room — his toys still scattered nearby, the unused tanks of oxygen no longer cluttering the entryway — they acknowledge that their first born boy wasn't typical.

"He was extraordinary," Nathan Elam said.

Despite the tubes, wires and wheelchair that supported Andy, his parents want others to know that none of the add-ons define their son or any child with health issues.

"He was so smart. He knew what people were saying. He had a sense of humor," Lynette Elam said. "He was nonverbal, but he loved interacting. He could make you laugh."

Lynette Elam said her pregnancy was normal, complete with routine testing and excitement about a baby boy joining the family of college sweethearts and their French bulldog, Bernie.

"I knew from the look on the nurse and midwife's faces that something was wrong right away," she said. "From my view I could see that his fingers were very long. For some reason that's just the first thing I noticed, and what I remember."

By the time she left the hospital with her son nine days later, she learned that elongated features, like his fingers, are common of Neonatal Marfan syndrome. The rest of his slender body followed suit as he grew.

"Things present similarly with regular Marfan syndrome," Lynette Elam said. "The difference is they have a normal life expectancy, the same as you and I. It's obviously much shorter with the neonatal diagnosis."

Andy's first week at home in Andover was the only "tube-free" week of his brief life, his parents said.

"We suddenly had a lot more than just a diaper bag to grab on the way out the door," Lynette Elam said.

He had surgery on his diaphragm, a permanent feeding tube installed in his belly, and an array of therapies that filled a calendar. The portable oxygen tanks appeared, too. Physical therapists, occupational therapists, feeding and music specialists became extensions of the Elam family.

"They were the kindest team," Nathan Elam said. "There aren't even words to describe the care that he was given. Especially from the nurses who came into our home."

The team at the Professional Center for Child Development provided Andy's only school experience for several hours three days per week into this fall.

At one point, Andy's health was under control enough that he went nearly a year and a half without a hospital stay. Lynette and Nathan Elam decided to have another baby.

Zachary, now 15 months old and healthy, won't have his own memories of his brother.

"Andy taught all of us so much," Nathan Elam said. "We'll all carry that with us. Zach isn't the quietest baby or the most gentle, you could say. But with his brother, he knew to calm down and be easy with him."

Lynette Elam will remember to slow down and "appreciate the little things," she said, like taking time to stop and interact with children who struggle medically, like her son did.

"There's nothing to be afraid of," Nathan Elam said. "So many people are intimidated. But that mom is dying for someone to come up to her and ask what her kids likes and to say hi."

The Elams started to see the end of Andy's life in February, when a harsh cold knocked him down and doctors suggested hospice care.

He rallied through a goodbye with his parents and little brother in June. He enjoyed the summer and his third birthday celebration in the backyard, topped off with a bounce house and friends in September.

It's those sugary sweet birthday memories that the family will hold onto.

"He was happy," his mother said simply.

In lieu of flowers, the Elam family is asking for donations to Andy's school at the the Professional Center for Child Development in Andover. Their website is theprofessionalcenter.org.