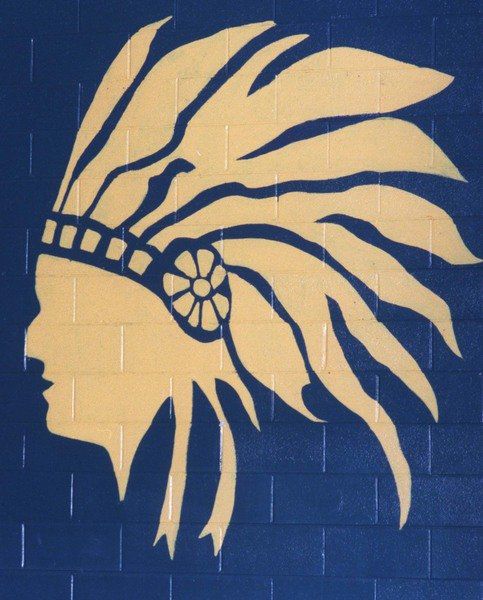 File photoThe old logo of the Andover High School "Warriors" used a Native American and an Indian headdress. That was abolished in favor of the "Golden Warriors." 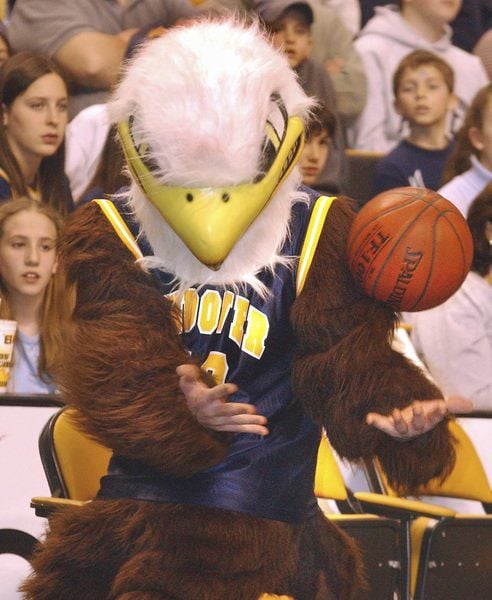 File photoAndover's mascot is an eagle. The teams are known as the "Golden Warriors." 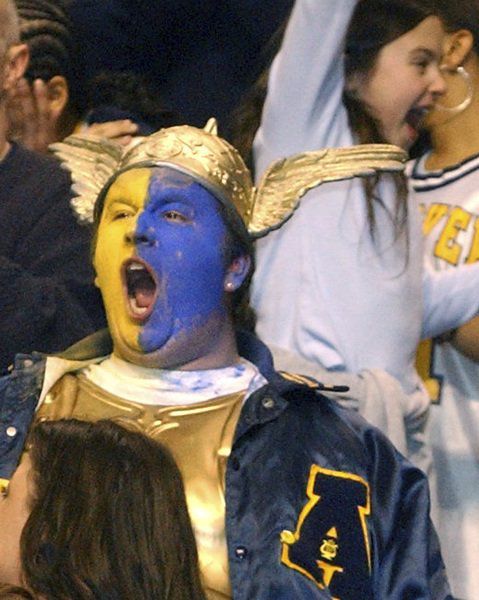 This fan took it upon himself to create a Viking Warrior for a trip to Boston Garden for a basketball final game.

File photoThe old logo of the Andover High School "Warriors" used a Native American and an Indian headdress. That was abolished in favor of the "Golden Warriors."

File photoAndover's mascot is an eagle. The teams are known as the "Golden Warriors."

This fan took it upon himself to create a Viking Warrior for a trip to Boston Garden for a basketball final game.

BOSTON — The use of Native American mascots by public schools and sports teams is an old source of controversy, and state officials have been reluctant to get involved, instead leaving decisions to local leaders.

Native Americans protest the use of mascots such as “Redskins” and “Sachems" as derogatory, while communities defend them as a celebration — not disparagement — of native culture that is bound in local tradition.

“Public schools have a responsibility to educate students and not perpetuate these kinds of stereotypes and misrepresentations,” said Linda Thomas, a parent who asked L’Italien and Lewis to file the bill.

Thomas led an effort last year to ban the use of the nickname “Redmen" by Tewksbury's high school football teams. The school committee rejected the request by a 4-1 vote.

“I don’t think most people mean to use derogatory language, but it’s been accepted as the way it is,” she said. “They don’t question whether people outside of their community find it offensive.”

The issue should be settled on a statewide level, she said, given the number of schools that use American Indian nicknames and imagery. Nearly 50 districts have a school or athletic team calling itself “Indians” or identifying with some other Native American name or symbol.

In addition to Tewksbury's Redmen and Lady Redmen, they include the Billerica Memorial High School "Indians" and Pentucket Regional High School's "Sachems."

L’Italien said she isn’t taking a side but felt the issue is worthy of debate.

“I'm happy to make sure this group -- and those who would oppose the bill -- have an opportunity to debate this idea in a public hearing at the Statehouse,” she said.

Some districts have asked parents and the public to decide whether to remove Native American names from football teams and high school gymnasiums.

Some districts have sought to settle the controversy by strike a balance.

The Andover “Warriors” were rebranded the "Golden Warriors" several years ago. The high school cheering section is known as "The Jungle," although nobody considers that to be objectionable. The mascot is now an eagle rather than a Native American.

The Merrimack College “Warriors” kept their name but swapped the mascot, an Indian chief for a Trojan warrior.

Athletes at the University of Massachusetts Lowell are now called “Riverhawks” instead of “Chiefs.”

John "Jim" Peters Jr., a member of the Mashpee Wampanoag tribe and director of the Massachusetts Commission on Indian Affairs, said the use of Native American images and nicknames is insulting.

Efforts to ban them have only seen limited success, however.

“Schools defend it by saying it’s been a part of the community for years and they have respect for natives, but then they hold pep rallies where they simulate scalpings,” he said. "They are portraying lies and myths of what happened in the early days.”

The use of American Indian names and images dates back to the late-1920s, Peters said, a time when federal “civilization regulations” forbade Native Americans from speaking their languages, practicing their religions or leaving their reservations.

Even the Massachusetts state flag has imagery that Native Americans find offensive, he said.

It depicts an Native American holding a bow and arrow, as arm above him holds a sword. Below is a Latin motto, “By the sword we seek peace, but peace under liberty.”

Supporters of a ban could get support from the state’s largest teacher’s union.

Barbara Madeloni, president of the Massachusetts Teachers Association, said it has long opposed the use of “mascots or logos based on race, ethnicity or other personal characteristics since these mascots are offensive to the people whose images are being portrayed or caricatured.”

“Schools should be environments where everyone feels safe and respected,” she said.

Several states have banned the use of Native American mascots and imagery.

In 2012, the Oregon Board of Education said schools must eliminate Native American mascots or risk losing public funding.

In California, Gov. Jerry Brown signed a law two years ago banning use of the term “Redskins” as a name or mascot. The law didn’t require schools to immediately remove logos, and some districts have resisted.

In 2014, the U.S. Patent and Trademark Office canceled the Washington "Redskins” trademark, claiming the name and logo disparage Native Americans. The NFL team is appealing the ruling in federal court.

Its case likely will be influenced by a case heard by the U.S. Supreme Court in January involving a rock band whose name, sometimes used as a slur for Asian-Americans, was rejected by the trademark office.

Christian M. Wade covers the Massachusetts Statehouse for North of Boston Media Group’s newspapers and websites. Email him at cwade@cnhi.com.