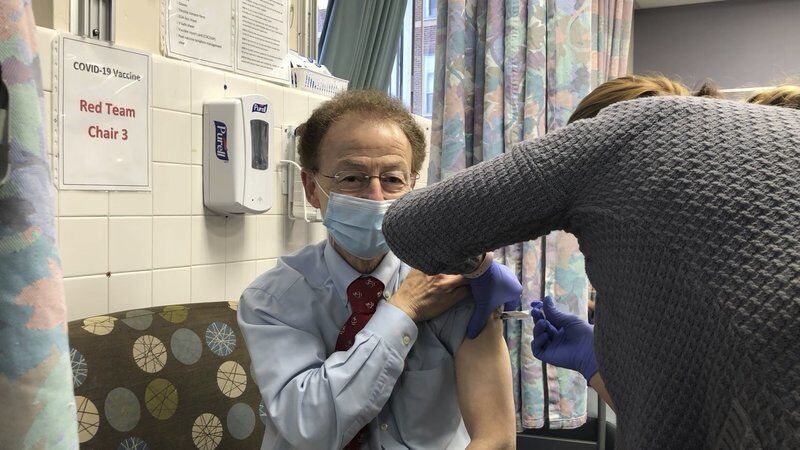 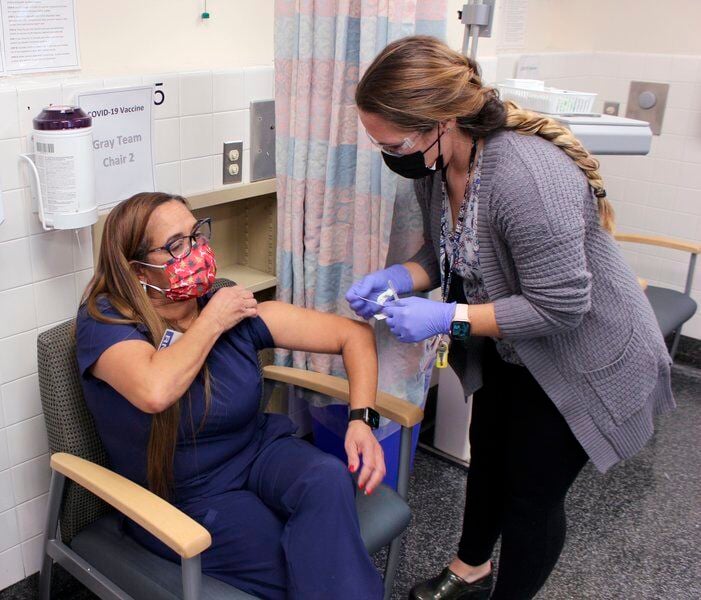 Hundreds of local doctors were among the first frontline workers to receive Pfizer’s COVID-19 vaccine this week at both Lawrence General Hospital and Holy Family Hospital in Methuen, where shots were administered to employees in hopes of curbing the spread of coronavirus.

Dr. Eduardo Haddad, the hospital’s chief of medical affairs, was among those to roll up his sleeves at LGH of Wednesday, when vaccinations were started as a soft launch in Lawrence. Additional shots were administered Thursday to staff who have direct patient contact, Haddad said.

The hospital was among the first in the Merrimack Valley to receive 975 doses of the Pfizer COVID-19 vaccine, which was partially produced in nearby Andover.

Approved by the Food and Drug Administration for emergency use authorization on Dec. 11, the vaccine comes in two doses given three weeks apart. According to hospital spokesman Ben French, all 975 doses Lawrence General received were used as initial doses for staff and second doses are already allocated to them by the manufacturer to be shipped at a later date.

Like Lawrence General, their vaccines are being given to a “cross section” of workers, including those in the housekeeping and environmental service departments. While Holy Family has hospitals in both Methuen and Haverhill, vaccinations are taking place in Methuen because that hospital has the proper storage space for the shot, Chiaravalloti explained.

Respiratory therapist Laura Janco, who works at Holy Family in Methuen, was the first person to get vaccinated Wednesday. She was followed by Dr. Ingo Stubbe, a hospitalist from the Haverhill campus.

“This has been a long journey since March and receiving the vaccine is a historic moment,” said Chiaravalloti, who praised the vaccine committee at Holy Family, including department directors and Chief Medical Officer Dr. William Goodman for leading the charge.

“We feel this is as historic as the smallpox vaccine,” Chiaravalloti added.

Haddad, a nephrologist, also calls the receipt of the vaccine a cause for celebration — while stressing continued vigilance in the fight against COVID-19.

“This is really a testament to how much science has progressed and all this knowledge that the turn of the century has provided in terms of how cells talk to each other,” Haddad said.

“This was approved as an emergency vaccine, so people need to understand that there is no absolute certainty,” Haddad said. “In years from now, there could be side effects — it’s a balancing of risk. The risk of this disease is so much more than any possible side effect of the vaccine.”

According to Haddad, the vaccine created by Pfizer and suitable for all people age 16 and older is “a designer drug” that could be effective longer than the annual flu vaccine. The second follow-up shot, Haddad said, is the more important of the two, as it provides a longer-term immunity.

Patients receiving Pfizer’s vaccine, including those at Lawrence General this week, were all given a card with their vaccine information on it and must bring it back in three weeks to obtain their second dose.

“Cells need time to respond. It’s like going to school: You don’t learn to fight against an invader in a day or two. For a real robust immune response to develop, it would take about two months from the shot or initial infection,” the doctor explained, referring to some anti-vaxxers who may wish to forgo a vaccine in hopes of forming natural antibodies.

“If you have a mild case of it (COVID), your immunity is probably short-lived,” he added. “The vaccine is going to be much more potent in terms of immunity than the actual infection.”

Haddad explained that a key piece of the vaccine, messenger RNA, was produced at the Pfizer plant in Andover. The doctor uses the example of Paul Revere to explain just how mRNA works in the body.

“The whole concept of messenger RNA seems nebulous to people — dangerous — like, who knows, maybe I’ll develop cancer down the road because now my cells will have a different (genetic) code in them, but it isn’t that way,” Haddad said.

Side effects from the vaccine have been reported by patients in clinical trials and have been similar to flu-like symptoms, the doctor said. A sore arm is to be expected after the first shot. Feeling feverish or fatigued may happen after the second shot, according to Haddad.

While hope is on the horizon — most of the Merrimack Valley is expected to be vaccinated by spring — Haddad said mask wearing and social distancing aren’t going anywhere any time soon. In his practice, Haddad is seeing patients virtually until next fall.

“I think that’s when we’ll really start to open up and stop wearing masks,” he said.

For now, Haddad said this moment in time — like many others over the last nine months — has proved to be one he’ll remember.

“It feels good, first of all, having survived all this. We are saddened by the people we lost and are still losing,” he said.

“Now is a time to celebrate progress and science and move on to a stage of safety where we can do all the normal things again. Civilization is based on knowledge passed down from generation to generation and we cannot go back to a place where knowledge is not respected. This is an experience that will stay with me forever and is really rewarding for me in particular. To be able to be here and do this in Lawrence has been gratifying.”