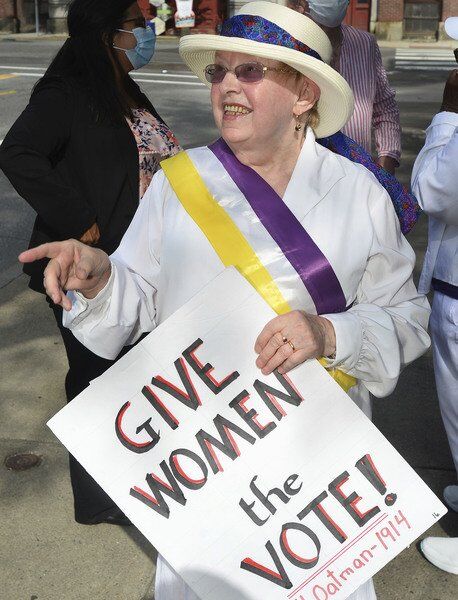 Valerie Osborne of Groveland, a member of the Greater Haverhill League of Women’s Voters, dressed in period suffragist costume, participates Friday in a rally honoring local suffragist Ella Findeisen and the 100th anniversary of the ratification of the 19th Amendment giving women the right to vote.CARL RUSSO/Staff photo 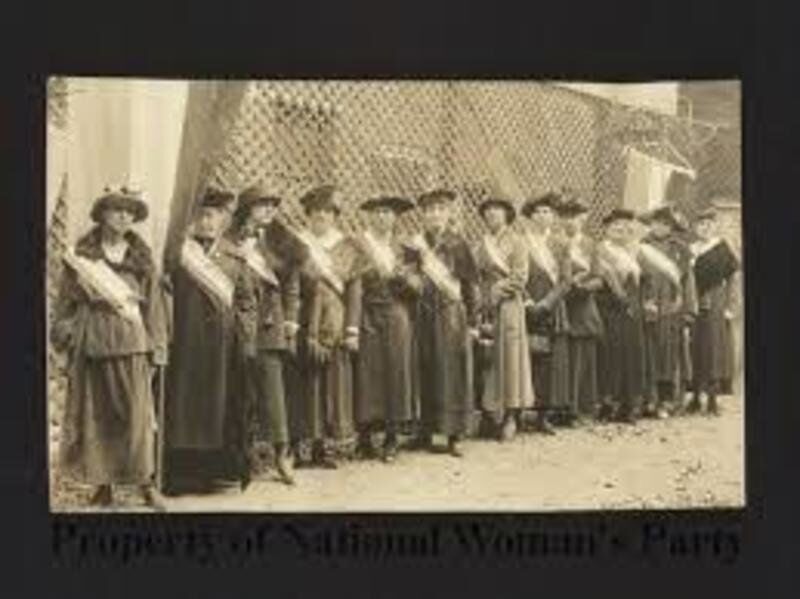 Courtesy photo. A historic photograph of suffragists arrested for picketing outside the White House in 1917.  Among them is Ella Findeisen of Lawrence, alternately identified as either the woman fourth or fifth from the left. 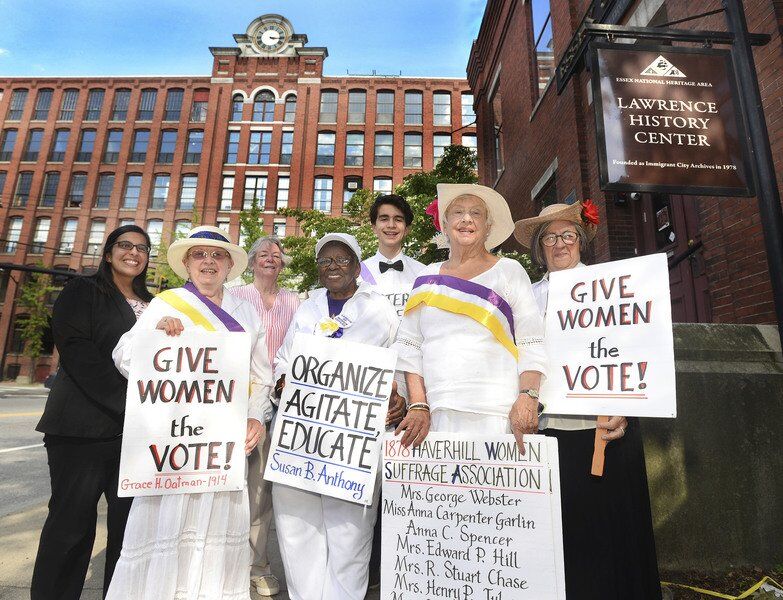 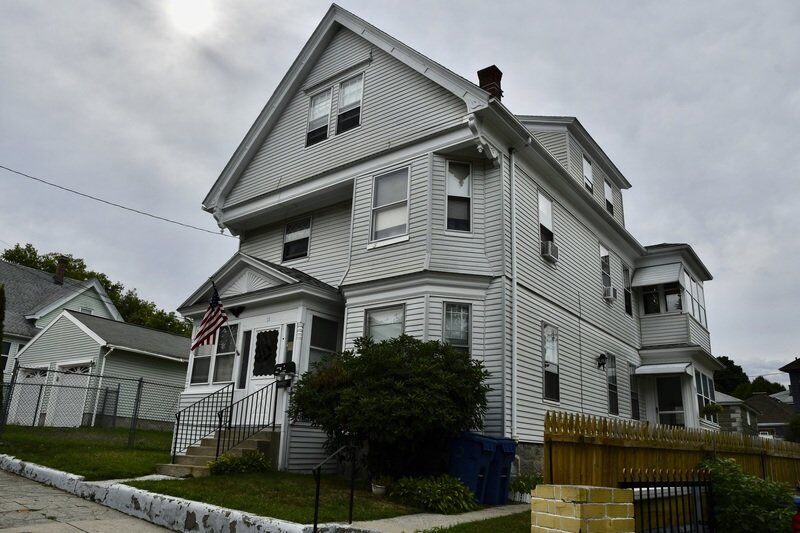 TERRY DATE/Staff photoThis is the former home of Lawrence suffragist Ella Findeisen, 11 Colby St. Findeisen was arrested for picketing outside the White House in 1917.

Valerie Osborne of Groveland, a member of the Greater Haverhill League of Women’s Voters, dressed in period suffragist costume, participates Friday in a rally honoring local suffragist Ella Findeisen and the 100th anniversary of the ratification of the 19th Amendment giving women the right to vote.CARL RUSSO/Staff photo

Courtesy photo. A historic photograph of suffragists arrested for picketing outside the White House in 1917.  Among them is Ella Findeisen of Lawrence, alternately identified as either the woman fourth or fifth from the left.

TERRY DATE/Staff photoThis is the former home of Lawrence suffragist Ella Findeisen, 11 Colby St. Findeisen was arrested for picketing outside the White House in 1917.

Don’t be fooled by the fashion — the suffragists’ long white dresses or their big hats.

They were tough and savvy women, hardened by generations of disappointment, scorn and struggle. Many hailed from Massachusetts, right here in the Merrimack Valley, a stronghold, where suffrage activism — and opposition — flourished.

Their legacy on behalf of equality lives on 100 years after the Aug. 18, 1920, ratification of the 19th Amendment to the U.S. Constitution, guaranteeing women the right to vote.

That legacy flows from the actions of largely forgotten, everyday women such as Ella Findeisen, a German immigrant who lived on Colby Street in Lawrence and whose arrest in a historic protest helped shape public opinion around suffrage.

Their work continues to inspire struggles for human equality, even as the nation pays tribute to the centennial of women’s suffrage, say local voting rights activists and historians.

On Friday, Nov. 9, 1917, Findeisen, 35, a bookkeeper, was at work at the family dairy when a friend, just returned from Washington, D.C., asked her to take her place on the picket line outside the White House, according to archival newspaper accounts.

The friend and fellow suffragist, Methuen dressmaker Eleanor Calnan, had just served 60 days in jail for picketing. Calnan worried what would become of her if she returned so soon to the picket line at the White House gate. She told Findeisen of the urgent need for reinforcements.

She traveled 450 miles to the nation’s capital. The next day, Nov. 10, she and 40 other picketers were arrested outside the White House gate.

Given a choice between a fine or imprisonment, Findeisen chose prison and was sentenced to 30 days, according to the Queen City Massachusetts blog.

Findeisen was among the prisoners at the Occoquan Workhouse on the Night of Terror, Nov. 14, when the superintendent ordered the beating of suffragists, according to archival newspaper accounts. And she was among the last to be released from confinement.

Occoquan was also where jailed suffrage leader Alice Paul of the National Woman’s Party led a hunger strike, protesting the treatment of jailed suffragists, who, she maintained, were political prisoners.

Paul and at least one other hunger striker were force-fed, having rubber tubes stuck down their throats and a mixture of milk and egg poured in.

‘This was not a shy woman’

Findeisen had to have been a woman passionate about social reform, says Kathy Flynn, a volunteer and head researcher at the Lawrence History Center.

She — Findeisen — immigrated to America in 1890 with her family, and she became a naturalized U.S. citizen in 1897, according to census and online burial information.

The family lived at 11 Colby St. Ella was one of five children of Franz and Pauline (Busch) Findeisen.

As a young woman she was a mill worker, a weaver, and became active with her union. She served as a union branch’s secretary and collector of dues.

She was the only woman named on a 1914 blacklist, likely circulated among Lawrence mill managers, identifying people not to hire, likely due to their union associations, Flynn said.

Of the 17 people on the list, 14 had been discharged from their mill jobs. Findeisen continued to work at the Arlington Mill in Lawrence until she took a job at the family dairy.

“This was not a shy woman,” Flynn said.

Flynn was among several people who gathered outside the Lawrence History Center late Wednesday afternoon to reflect on Findeisen and the suffrage movement.

Among them were members of the League of Women Voters of Greater Haverhill, including retired teachers Kay Herlihy and Kalister Green-Byrd.

The women gathered around the same time that Sen. Kamala Harris and former Vice President Joe Biden appeared together for the first time as running mates.

Green-Byrd, a Black woman originally from Alabama, was doubly proud to know a woman, an African-American woman, was appearing on a ticket for the first time in a presidential election.

“And I have lived to see that part of history,” she said.

The work of suffragists and others made this day possible, said Green-Byrd and others.

Herlihy, who was wearing a vintage suffrage dress with a purple and yellow sash, said the Merrimack Valley area was a center of the controversy, a hotbed of pro- and anti-suffrage sentiment. She has researched Haverhill Gazettes from the time.

“The anti-suffrage movement got more publicity and coverage than the pro-suffrage,” Herlihy said. “I’m sure it was frustrating (to the suffragists).”

Haverhill had two women’s suffrage organizations, one founded in 1878 and the other in 1914. Massachusetts was also home to strong anti-suffrage groups, led by women.

Bay State historian Barbara Berenson, a retired attorney to the Massachusetts Supreme Court and author of “Massachusetts in the Woman Suffrage Movement: Revolutionary Reformers,” sees some parallels between the suffragists and today’s social justice activism.

“Suffragists did not only protest; they also organized a mass movement for political change,” Berenson said by email. “Similarly, many protesting today intend to use this moment to seek systemic change to policing and to address issues of racial and economic inequality.”

The protests outside the White House started early in 1917 and continued throughout the year.

Protesters were subject to ridicule in the press — described on occasion as skinny nervous types or mere attention seekers — and were regularly harassed by members of the public.

Civil servants, soldiers and sailors, referred to as “bluejackets,” objected to the suffragists picketing the president while America was at war in Europe.

The counter-protesters reportedly wrenched banners from the hands of 17 suffragists during the weekend Findeisen was picketing.

In one instance, two sailors wrestled with a Boston suffragist named Morey, who was injured while they were trying to take her banner, according to the Boston Sunday Post’s Sunday, Nov. 11, 1917, publication.

Someone fired a bullet into the suffragists’ office near Lafayette Park; others climbed a ladder to the office balcony to remove a flag. Women tried, unsuccessfully, to push the ladder off the building.

Calnan, the Methuen dressmaker, became a veteran of the movement. By 1919 she had been arrested 14 times and spent 62 days in solitary confinement.

Both Findeisen and Calnan would proudly wear their “Jailed for Freedom” pins awarded by the National Woman’s Party to those who joined leader Alice Paul as the first people to protest at the White House.

Findeisen died Aug. 29, 1944 at age 62. Her remains are interred in the family grave site at Bellevue Cemetery in Lawrence.

Her obituary makes no mention of her suffrage activism.