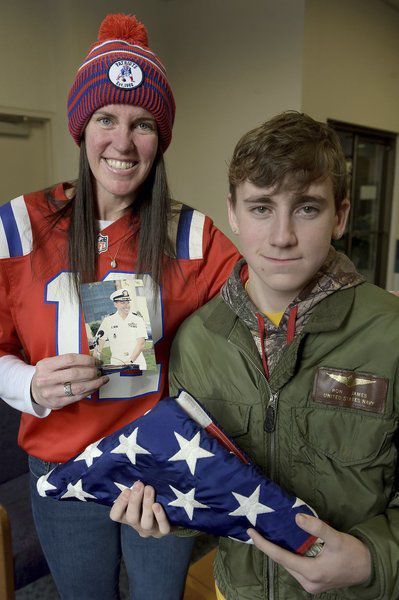 TIM JEAN/Staff photoBrendan Guenard, 14, of Andover, received a sentimental bomber jacket from Kelly James, of Nashua, who gifted it on behalf of her late father U.S. Navy Cmdr. Ron James 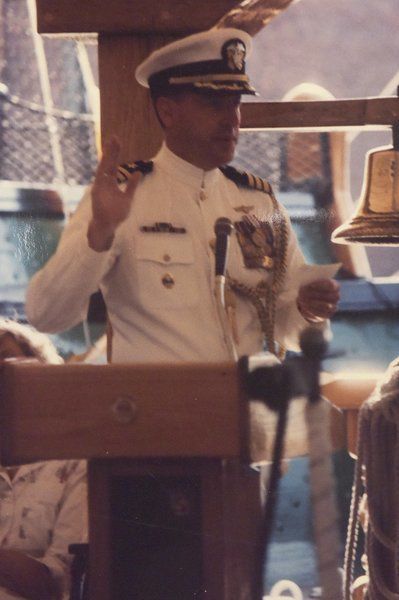 Courtesy photoCmdr. Ron James retired in 1991 after a 20-year career with the Navy. 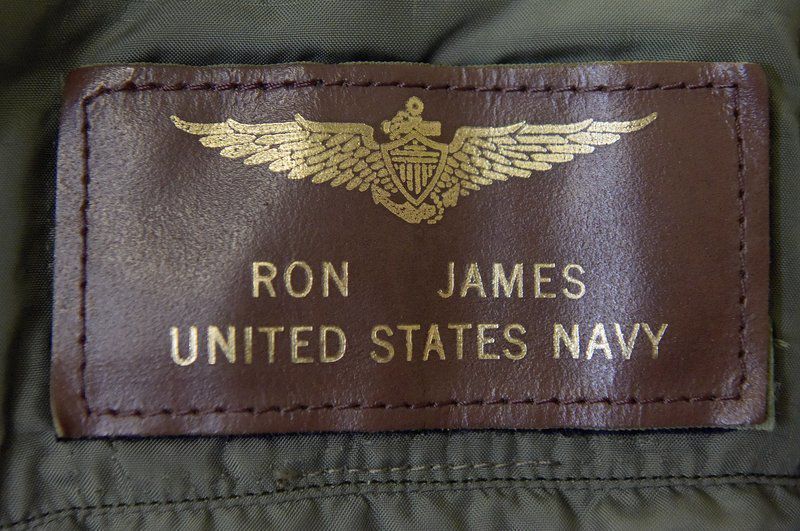 TIM JEAN/Staff photoBrendan Guenard, 14, of Andover, received a sentimental bomber jacket from Kelly James, of Nashua, who gifted it on behalf of her late father U.S. Navy Cmdr. Ron James

Courtesy photoCmdr. Ron James retired in 1991 after a 20-year career with the Navy.

Three years ago on Christmas morning, Kelly James was at home in Nashua, New Hampshire, getting ready to celebrate the holiday when the phone rang.

The 40-year-old had just spoken to her father, retired United States Navy Cmdr. Ronald James two hours earlier, so she thought nothing of it — but what she found out on that call rendered her speechless. Her father, a decorated 69-year-old veteran living in South Carolina at the time, had died.

That call changed James’ life — and the way she views Christmas — forever. But rather than make the holiday a sad remembrance, James has chosen to pay it forward, in memory of her dad.

This year, the Dartmouth-Hitchcock Hospital nurse participated in a gift exchange through Family Services of the Merrimack Valley’s Big Friends, Little Friends mentorship program. She was asked by organizer Jen Cieslik to serve as a secret Santa and buy a Christmas gift for a 14-year-old Andover boy who was, like her, a huge Patriots fan who loves Tom Brady. The boy was also interested in the military, she learned.

So James put together a special gift for the teen: her father’s bomber jacket and an American flag she bundled with care — along with Pats-themed items.

“At 14, I really wondered what to get him for the military gift. You’re taking a gamble that he’s either going to look at it and go ‘ew,’ or really like it,” James said of the treasured clothing item. “I wondered if the jacket would fit, if the sleeves would be too long. My dad was a big guy.”

Inside the jacket’s pocket was another gift from James and her Palm Coast, Florida-based mother, Judy James: A letter describing the 20-year career of the decorated veteran who wore the jacket.

“He was not in combat in Vietnam, but flew off the coast as the war was winding down,'' Kelly James wrote in the letter. "It was his job to talk with the pilot of the aircraft and be their eyes to help ensure a safe, successful landing.''

She concluded the unsigned note with a few lines from Mary C.D. Hamilton’s 1915 Navy hymn and of course, those two all-important words: “Go Pats!”

Brendan said he not only loved the “awesome” gift — which fit him perfectly — he wore it to school.

Attending sessions as part of the constitution division sponsored by Haverhill’s Veterans Northeast Outreach Center, Brendan participates in community service efforts and other military activities like marching in area parades.

Brendan and Kelly James recently met, and he was able to thank her in person.

James was thrilled to see that her father’s jacket made someone happy on Christmas.

“I’ve been going through his stuff for three years. I have everything I need,” she said. “It’s about paying it forward: If it brings someone else a smile and makes someone happy, job done.”

“I call it a Christmas miracle,” she said of his death. Now I call Christmas a celebration of his life. This is just another way to keep his spirit alive.”