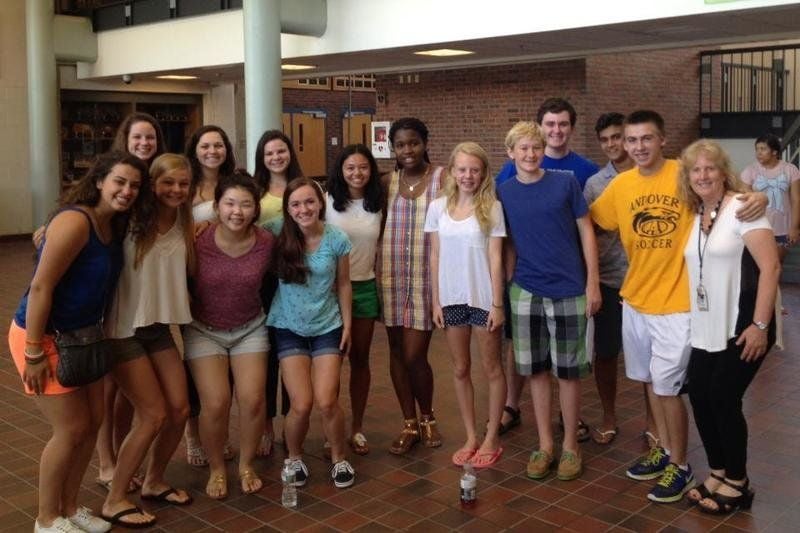 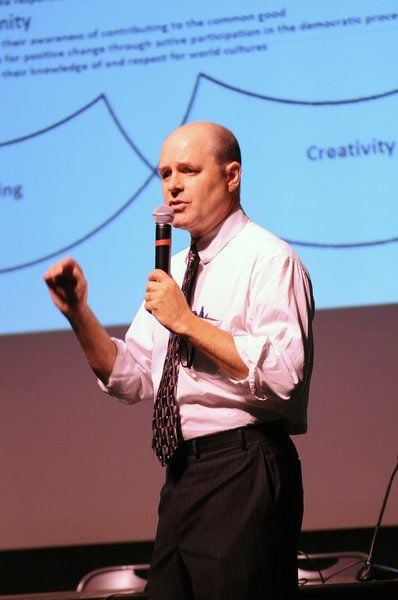 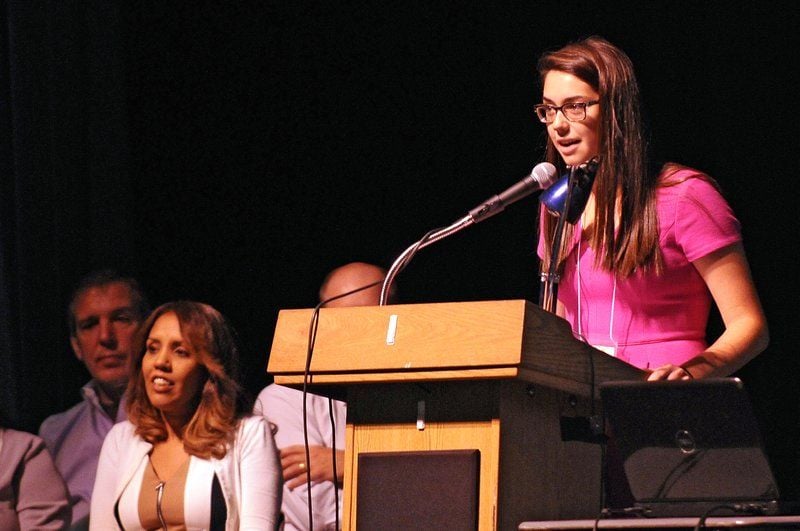 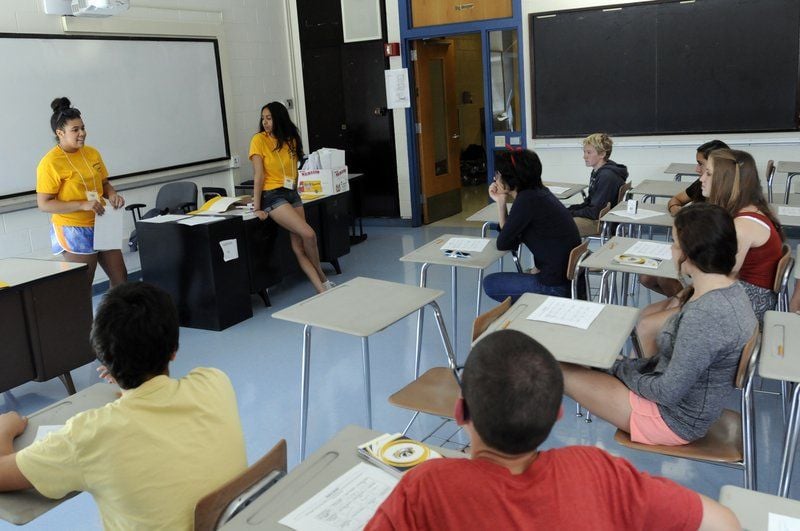 TIM JEAN/Staff photoStudent ambassadors Snantelle Batista, left, and Spurthi Kontham answer questions from new students during freshman orientation at Andover High School last week. A new Students to Students program gives some freshmen a leg up on their classmates via a mentor who guides them through their first semester at the high school. 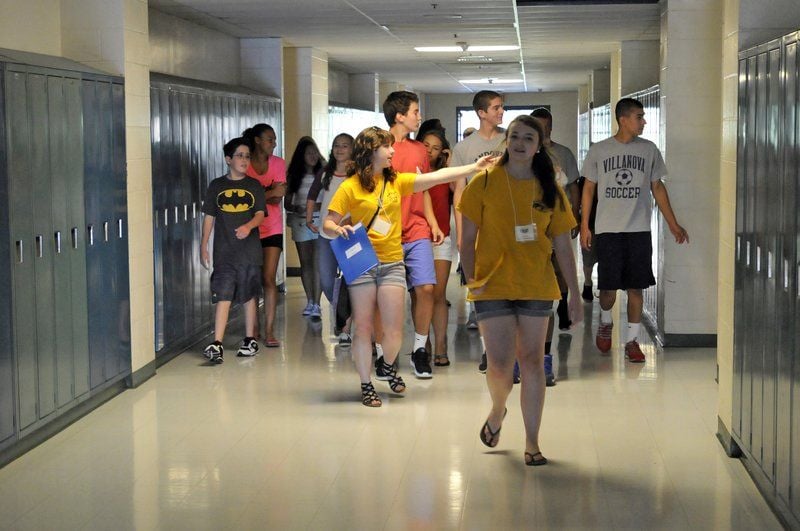 TIM JEAN/Staff photoStudent ambassadors Snantelle Batista, left, and Spurthi Kontham answer questions from new students during freshman orientation at Andover High School last week. A new Students to Students program gives some freshmen a leg up on their classmates via a mentor who guides them through their first semester at the high school.

For incoming freshmen, the start of high school is often a time of nervous energy, anticipatory wonder and unanswered questions. How will they navigate the halls? Survive ramped-up homework assignments? Make nice with upperclassmen?

Now, some of those upperclassmen who they might otherwise have feared are about to become their greatest allies.

Enter their student mentor, who is about to show them the ropes of their new surroundings.

Andover High School social worker Abby Levin is the force behind Andover High’s Students to Students Mentoring Program — an initiative she launched last year to help ease the tension for freshmen and incorporate them into their new school.

Through the program, participating freshmen are assigned a senior who they meet with once a week over lunch. The sessions, which continue throughout first semester, allow the first-year students to raise concerns, ask questions and gain some insider perspective.

“The academic structure from middle school to the academic structure of the high school is a big transition,” Levin said. “Some of the kids who were involved last year were going through family situations, some weren’t involved in sports or other programs and some were just on the quiet side. They’re not kids who are in special-ed programs or who are learning disabled; they’re just kids who might benefit from meeting with seniors.”

While most mentors are seniors, Johnson won Levin’s approval to join this year’s group of mentors as a sophomore. She was among the mentors leading a group of freshmen on an individualized guided tour of Andover High on Tuesday — one day before the school year officially began .

“I think it’s good to help the freshmen who don’t know their way around,” Johnson said. “I can relate to the feeling of being so scared and so helpless. I feel like I should really help them have a good first day

“From the tips I received from seniors last year, like when to avoid a staircase or where to go, I felt like I had been here my whole life after just one week.”

Levin said that’s precisely the goal of Students to Students. She said for those unfamiliar with the building, the vastness of Andover High can be overwhelming.

“I’ve overheard one kid ask about the pool on the third floor of the school — we don’t have a pool,” Levin said. “It’s a big school that can be confusing for freshmen who are new to it.”

The mentoring program received a $1,500 grant from The Andona Society of Andover, which pays for the weekly lunches.

“They come in and can get free pizza,” Levin said. “It allows them to sit down and just breathe.”

Seventy students — 35 seniors and 35 freshmen and other newcomers to the school, such as transfer students — took part in the mentoring program in its pilot year. This year, the program already has 40 mentors and 20 new students signed up — though the number of new students is expected to rise in the first few weeks of the school year.

Recent graduate Kaitlyn Conte, who served as the student president of the program last year, said Students to Students is all about making freshmen feel more comfortable.

“I gravitated toward the program because I believed in what they were doing,” said Conte, who is starting her freshman year at Worcester’s College of the Holy Cross this fall. “It’s a nice opportunity for freshmen to talk with seniors about school, get to know people and ask about teachers and classes.”

This year’s president, as chosen by Conte, is someone who knows firsthand how difficult it can be to transition into a new situation.

Ariel Leachman arrived in Andover four years ago from Bronx, N.Y., to begin her high school career through the A Better Chance program. ABC provides opportunities for students in struggling areas to obtain a top education elsewhere.

Now a senior, the 17-year-old Leachman wishes she had been assigned a mentor to help ease her entry into Andover High.

“I identify with people having a difficult time making the transition into not only high school, but into a new community,” Leachman said. “Suburban Andover is very, very different from New York City.

“Coming in as an ABC student, there are people in place to help that transition, but I still wish a program like this was in place when I first started. I’m excited to help incoming ninth-graders not have to go through that alone.”