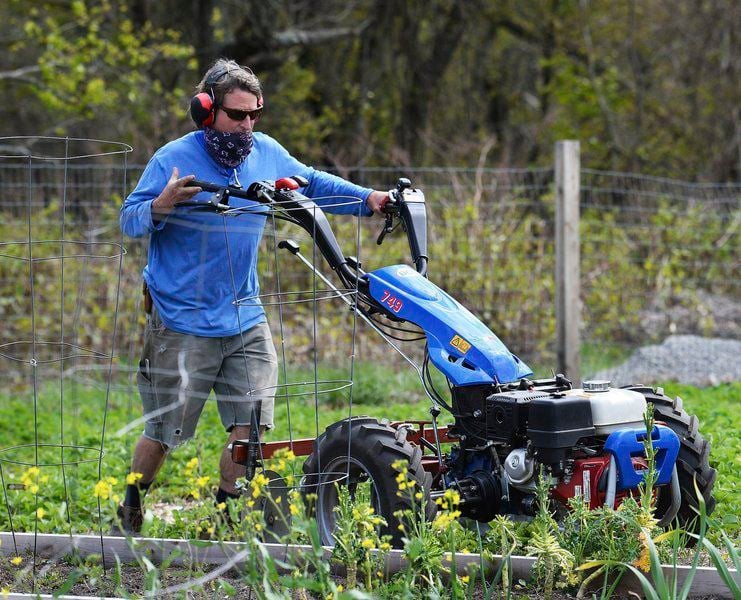 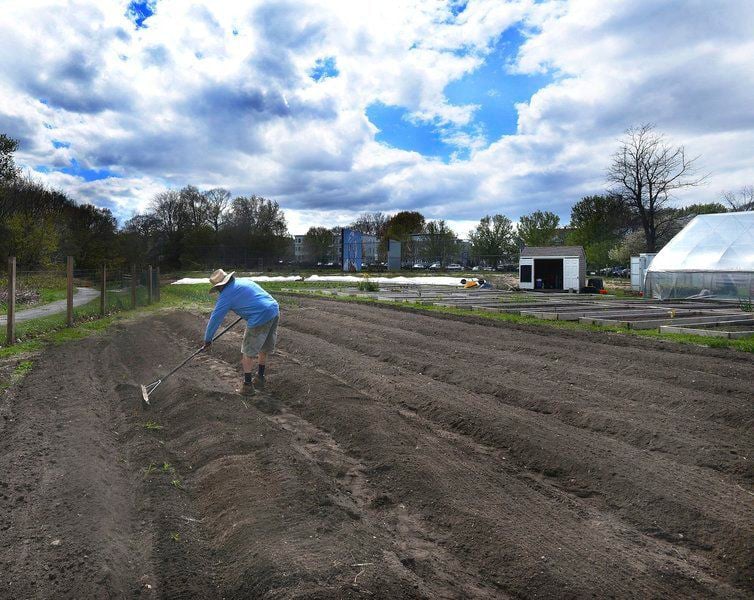 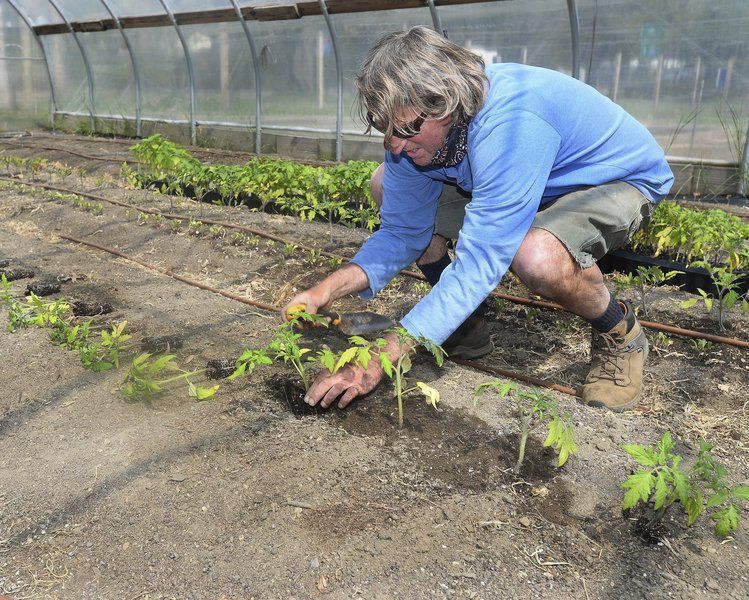 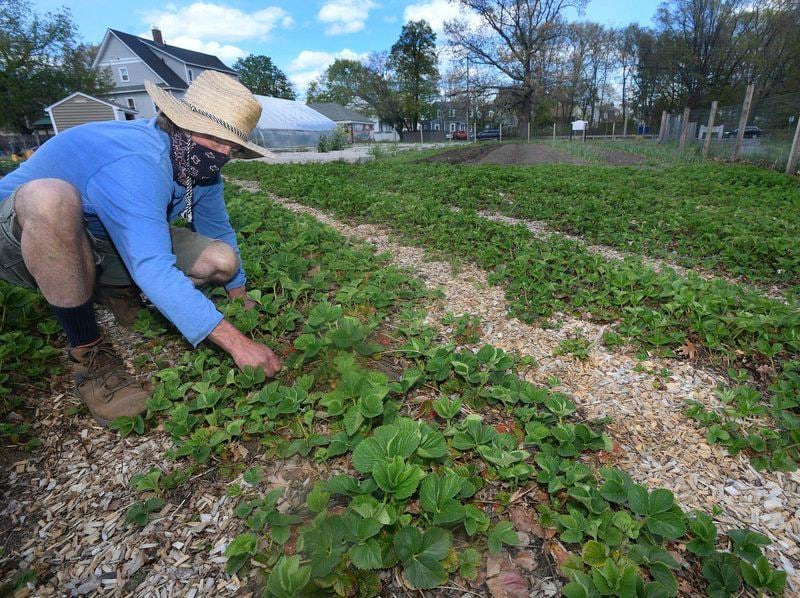 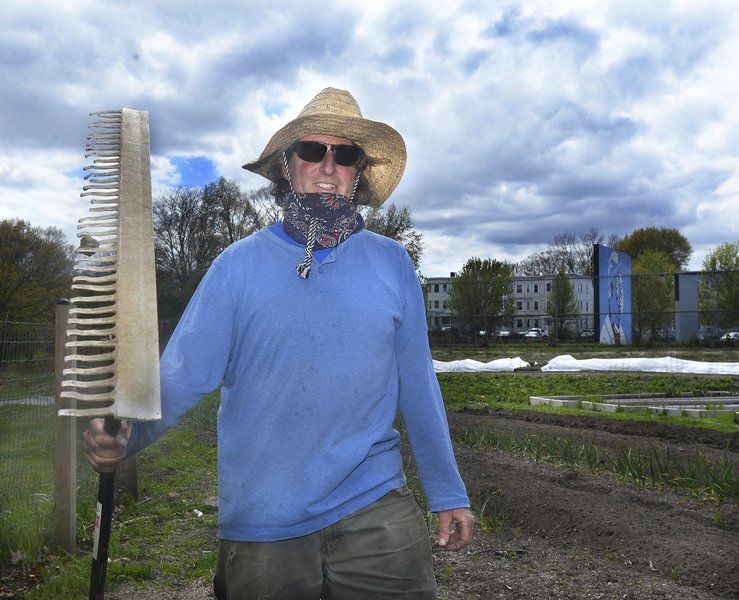 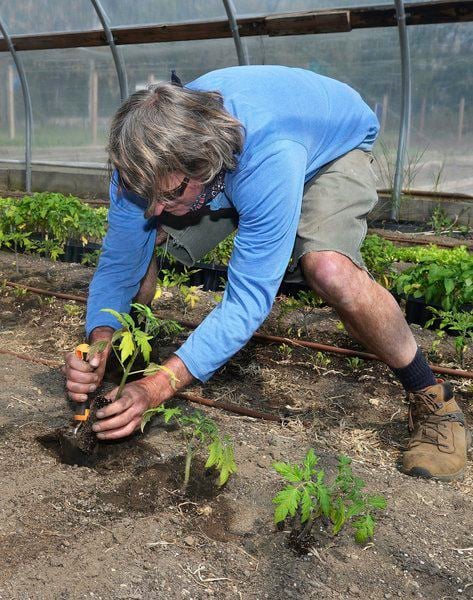 In Costello Park, the lonely farmer works his fields under the sun.

Thomas Paulsen, of Andover, holds the rototiller's wide handlebars and plows the dark earth at the urban farm, the largest in a network of community gardens operated by Groundwork Lawrence.

Paulsen then rakes the beds, mounding rows for vegetable seedlings that will become food for Lawrence soup kitchens, pantries and farmers markets.

Ambulance and police sirens wail and cars rumble past, but the farmer hardly hears them. His attention is on readying fields.

In a typical year, schools, children and adults on professional service days would already have volunteered hundreds of hours readying this garden for the growing season.

But in the year of the coronavirus and social distancing, Paulsen works mostly alone. His fiance, Jenn Mosher, lends a hand when she can.

On this Tuesday she is weeding.

Nearby, baseball immortal Roberto Clemente, painted blue on a park mural, gazes patiently, a bat resting on his shoulder.

The urban farm is an educational facility that teaches Green Team members – young adults from Lawrence who work there part time – where food comes from, how to raise it and work on a team.

It doesn't look like the Green Team or volunteers will labor at the site's half-acre of gardens this year.

But Groundwork Executive Director Heather McMann says the organization is determined to produce a bountiful harvest, a vital source of fresh produce for the hungry at a time when food insecurity is high.

Paulsen will be teaching in one way or another. At the very least he will demonstrate what can be achieved through hard work, dedication and perseverance.

He learned to grow food while in college at the University of California, Santa Cruz, and farmed for seven years after he graduated in 1993. He spent 13 years in Spain before returning to the United States and farming.

The goal at the Costello Urban Farm remains the same as last year when 5,438 pounds of produce were harvested — potatoes, carrots, garlic, squashes, zucchini, peppers, greens and tomatoes.

Eddie Rosa of Lawrence, who enlists volunteers and support for Groundwork programs, occasionally drops by.

"I was at Costello last Tuesday and it looks fantastic," Rosa said. "It looks like a team has been out there."

Paulsen has a Zen focus that puts him into a zone, Rosa says.

The project has been helped by the Greater Lawrence Technical High School, which is keeping trays of seedlings warm in its greenhouse.

Paulsen's work ethic is simple: put the work in. So far so good.

"It is rolling," he said. "We are getting stuff in the ground."