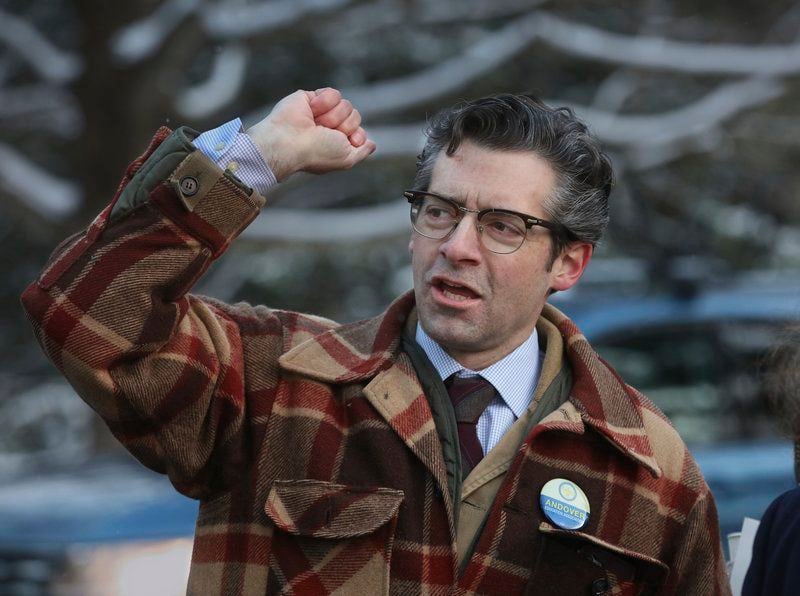 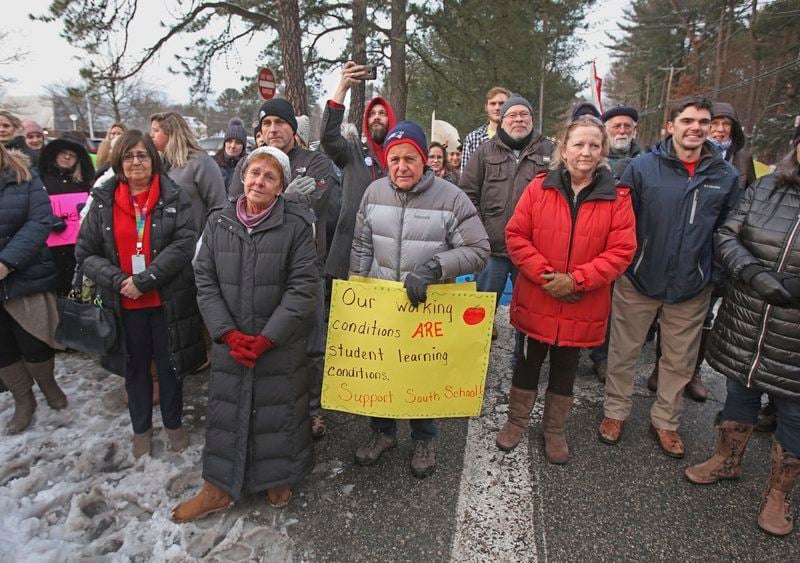 MIKE SPRINGER/Staff photoDemonstrators listen to a speech during a rally in support of teachers at South Elementary School in Andover. 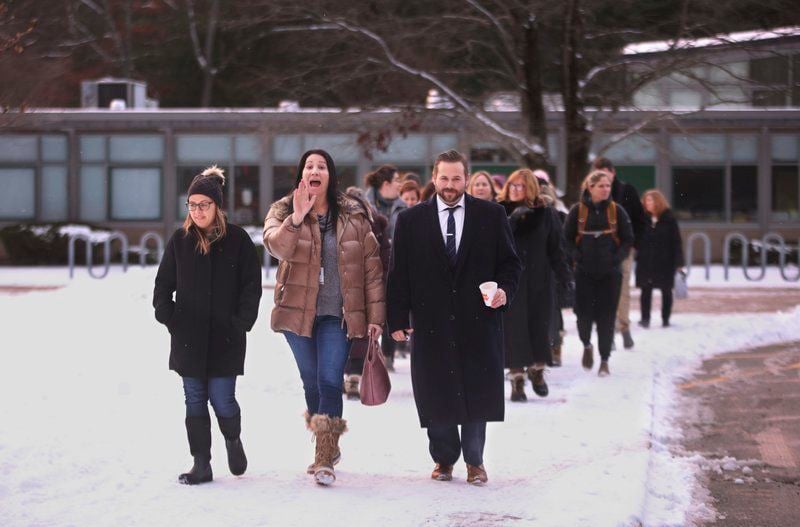 MIKE SPRINGER/Staff photoA group of teachers led by union representatives, from left, Renee Theodorou and Lydia Wise, along with Massachusetts Teachers Association organizer Kevin Tierney, emerge from South Elementary School in Andover after classes were over last Wednesday to join demonstrators who turned out to show their support for the teachers.

MIKE SPRINGER/Staff photoDemonstrators listen to a speech during a rally in support of teachers at South Elementary School in Andover.

MIKE SPRINGER/Staff photoA group of teachers led by union representatives, from left, Renee Theodorou and Lydia Wise, along with Massachusetts Teachers Association organizer Kevin Tierney, emerge from South Elementary School in Andover after classes were over last Wednesday to join demonstrators who turned out to show their support for the teachers.

Dozens of teachers say they are tired of facing uncomfortable working conditions at South Elementary School.

The teachers and their supporters had a rally outside the school last week to make public their complaints about a “hostile work environment.''

“Teachers have been trying to improve the building climate and the response of the administration has been intimidation,” said Matthew Bach, president of the Andover Education Association, the teachers union.

Several teachers at the school wanted to survey their colleagues to find out how they feel about the working conditions, Bach said. The administration responded by having an attorney for the school district, Wendy Chu, interrogate those who organized the survey, he said.

Superintendent Sheldon Berman, however, said the purpose of the investigation was not to intimidate anyone, but to find out what the problems are at the school.

“The administration received allegations from teachers and staff of a hostile work environment at South Elementary School,” Berman said. “These allegations involve conduct during the contractual workday at South and include allegations by educators and staff that they have been mistreated by some of their colleagues.”

The allegations of a hostile work environment were not directed at the school’s principal, Tracy Crowley, according to the superintendent.

Aside from what he called the “severe response,” Bach, speaking at the rally in front of the school on Wednesday of last week, did not provide any specific examples of teachers or other employees being subjected to hostile behavior.

Berman did not offer any specific examples, either.

“This is a personnel issue,” he pointed out.

The Andover Education Association filed a request for an injunction against the investigation in Essex Superior Court in Salem last Wednesday, according to Kevin Tierney, an organizer for the Massachusetts Teachers Association. Tierney and Berman said they expect there will be a ruling on that motion Friday.

The Andover Education Association has also filed a grievance with the state Department of Labor Relations, Bach said.

Participants in the rally referred questions to Bach, an Andover High School history teacher who became the association’s president in June.

“Teachers have raised concerns,” Tierney said. Ordinarily, he said, the issues would have been resolved with “some kind of conversation.”

Instead, the administration responded by investigating the teachers who called for the survey, he said.

Berman said he was “surprised and disappointed” with the union’s actions.

“I’m confused by the actions they have taken,” he said.

Regarding the investigation by Chu, Berman said the school district has an obligation to look into allegations of a hostile work environment.

“We cannot sweep this under the rug,” he said.

Berman said South Elementary is a good school, having recently received recognition for its students’ strong academic achievement. The superintendent said he is confident “we can bring healing back to the school.”

“While the AEA appears to be portraying this situation as a union issue, such is not the case,” he added. “The investigation is not looking into matters that occurred within the context of union meetings. The investigation relates to alleged conflicts among the employees in the workplace; therefore, it is the administration’s responsibility to investigate and, if warranted, take appropriate action. No adverse action has been taken against any employee based on these allegations and none will be taken until the investigation is complete – and then only if warranted by the findings of the investigation.”