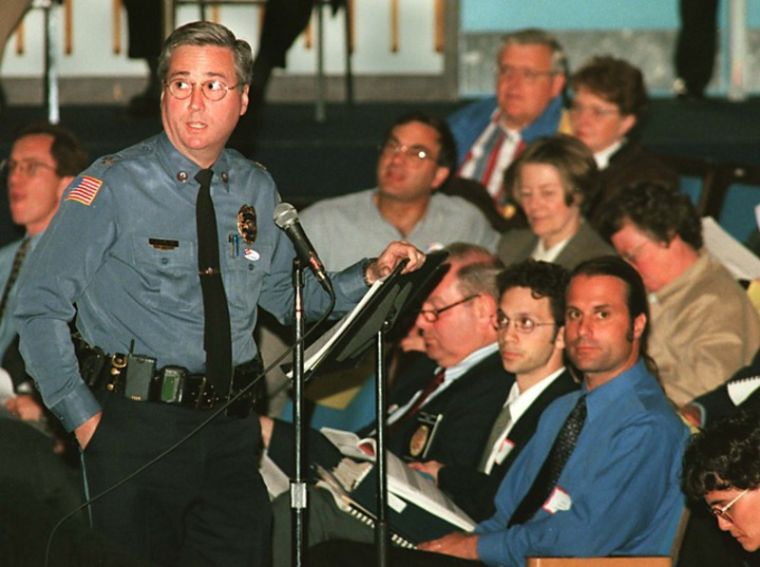 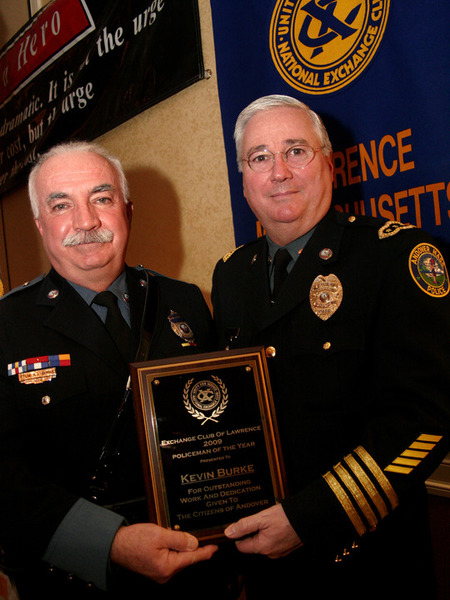 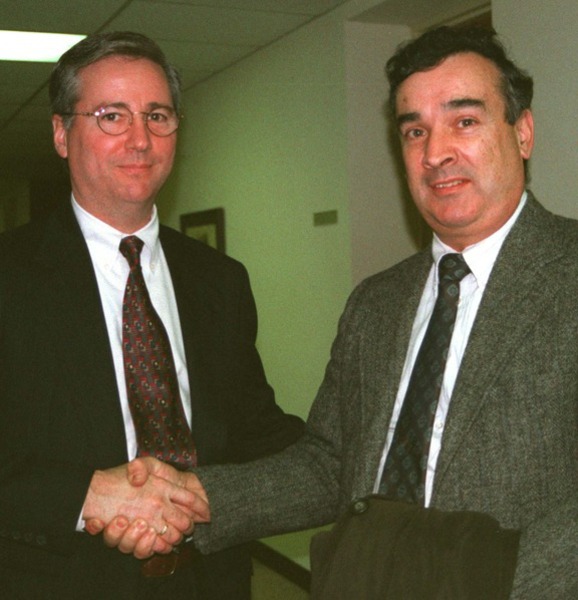 Brian Pattullo, left, assumes the job of Andover's police chief on March 9, 1998, with a handshake from acting chief Richard Enos. 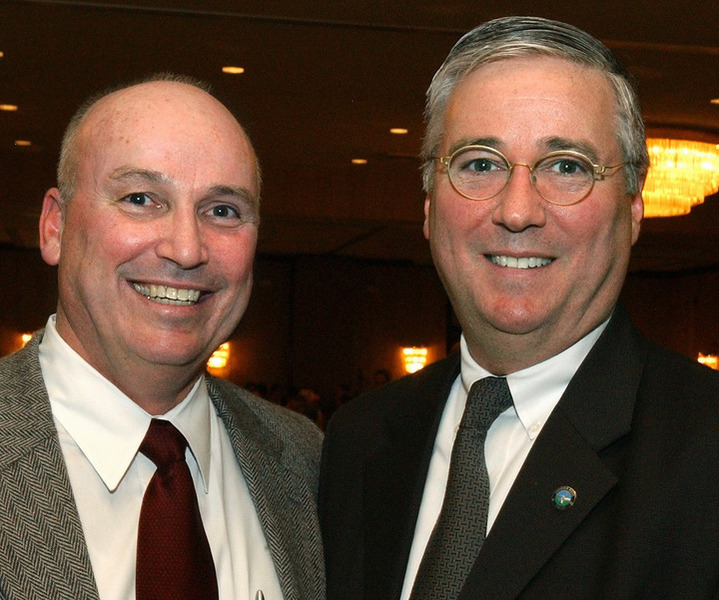 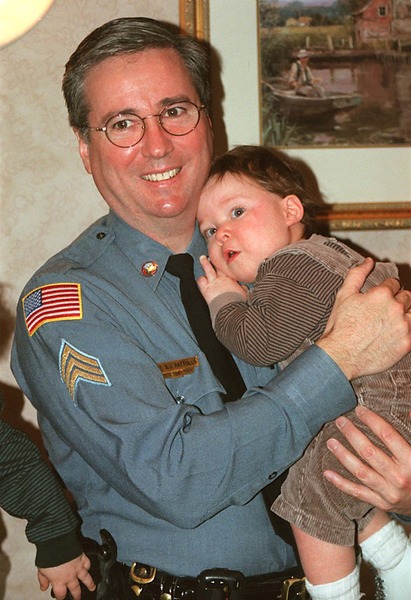 Brian Pattullo, as he was named Andover's officer of the year in 1998, with the baby whose life he saved. 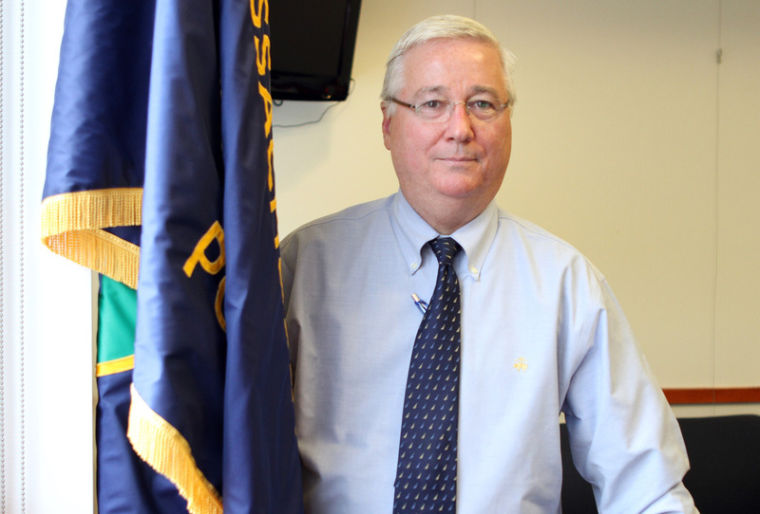 After 32 years with the Andover Police Department, Chief Brian Pattullo retired from his post this week. 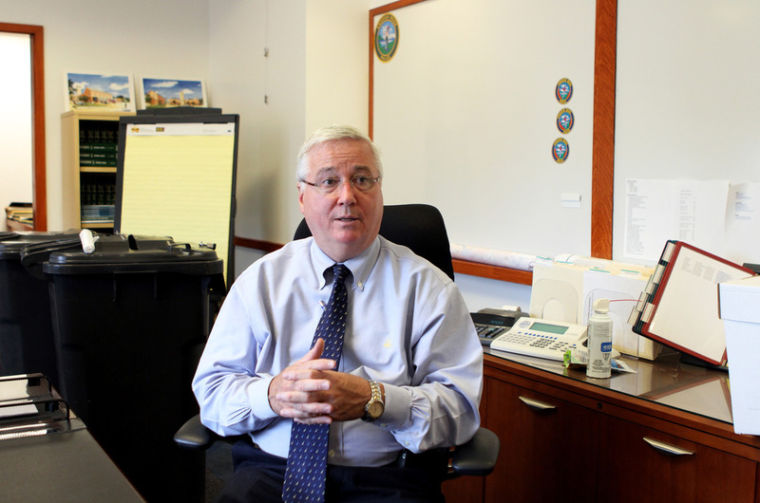 Police Chief Brian Pattullo is retiring this week after 32 years with the department, the last 15 years at its helm. 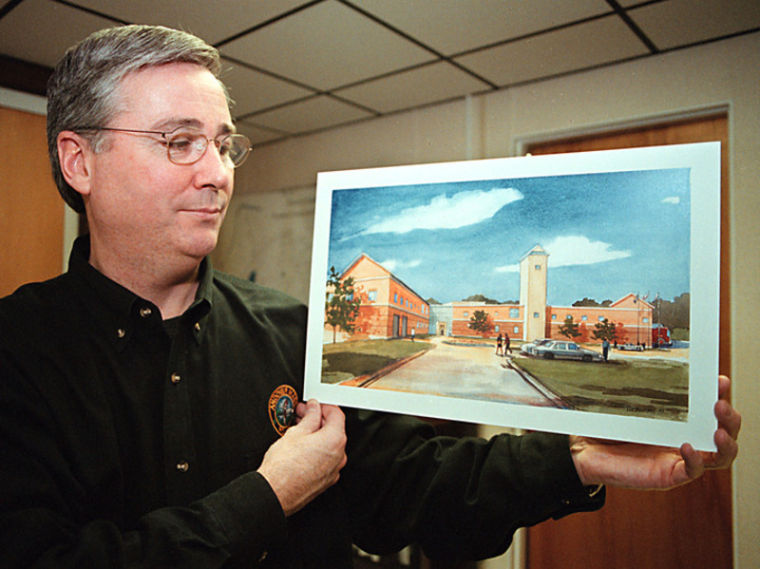 Andover Police Chief Brian Pattullo with an artist's rendering of the new combined police and fire stations, built in 2001 on North Main Street. 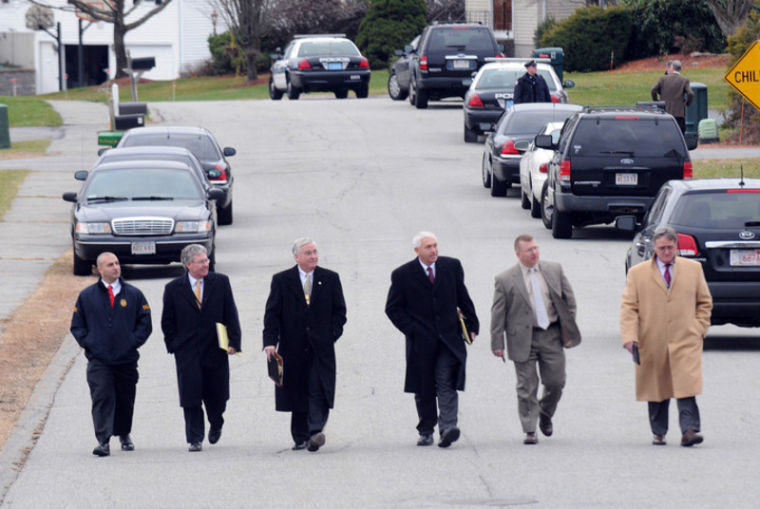 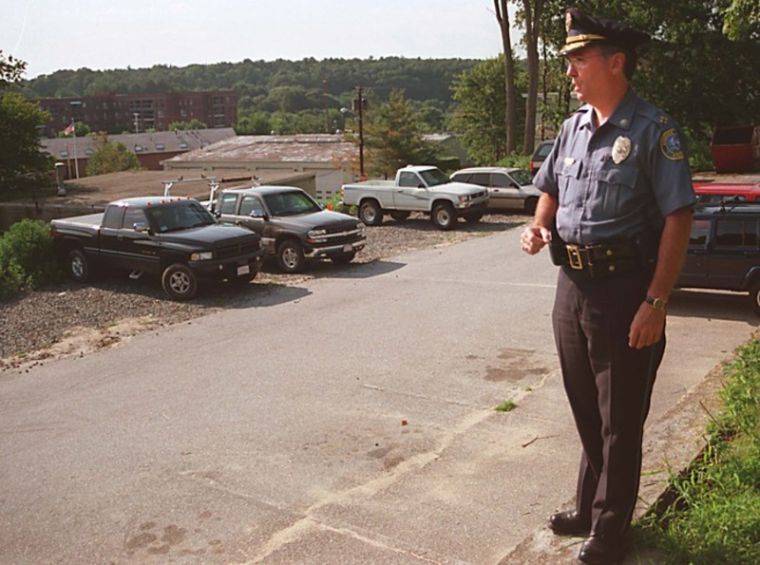 Brian Pattullo, left, assumes the job of Andover's police chief on March 9, 1998, with a handshake from acting chief Richard Enos.

Brian Pattullo, as he was named Andover's officer of the year in 1998, with the baby whose life he saved.

After 32 years with the Andover Police Department, Chief Brian Pattullo retired from his post this week.

Police Chief Brian Pattullo is retiring this week after 32 years with the department, the last 15 years at its helm.

Andover Police Chief Brian Pattullo with an artist's rendering of the new combined police and fire stations, built in 2001 on North Main Street.

Brian Pattullo has seen a lot of changes in the Police Department since he signed on as a patrolman 32 years ago.

More drugs, more traffic and more technology, to name just a few of the differences between 1981 and today.

Not to mention more calls for service.

“We have 33,000 calls for service a year,” he said. “From a dog barking to speeding to domestic violence to murder.”

Despite Andover’s reputation as a quiet, sleepy little town, the 74-person department, which includes 54 officers and another 20 civilian employees, stays very busy. And that’s something that keeps its police chief very busy, too.

Which may be one reason Pattullo has decided to call it quits.

On Wednesday, the longtime chief — the last of Andover’s “townie” department heads — retired from the force.

Now, he can spend more time in southern Maine in a house he owns with his partner. His home in Andover is on the market, although his mother, Beatrice, will continue living here. His brother, Clifford, is still on the Fire Department.

Occasionally, Pattullo will head into Boston, to the headquarters of Internal Security Associates, a company with 250 employees that works with government and private firms on a variety of security issues. He has taken on the position of its chief operating officer.

He will also be able to spend more time in his woodworking shop and playing the occasional game of golf, which he admits he’s not very good at.

“I’ll miss the interaction with the people of the community and the employees here,” he said. “It’s a great community and a great Police Department.”

At age 55 and with 32 years of service, Pattullo has maxed out his pension eligibility. He will earn a pension based on 80 percent of three years of his salary, depending on what pension option he takes. His most recent salary, he said, was around $154,000.

He could have stayed on the job until age 68. Instead, he’s handed over the department to Sgt. Patrick Keefe, who was sworn in Thursday morning.

“It was time to move on,” he said. “To get different experiences. It’s been a good run.”

Sitting in his office Monday morning, surrounded by moving boxes and plastic bins full of shredded documents, Pattullo reflected on his years in the department.

He said he relied heavily on Lt. James Hashem, second-in-command, in running the department.

“I’ve taken a team approach,” he said. “You can’t sit here and do it yourself.

He said he went to roll call every morning and hung around nearly every night to speak with the officers on the night shift.

“I walked around the building and interacted with everybody,” he said. “It’s good to find out what’s going on in their lives. Get to know them personally.”

The result, he said, was “very few grievances” and none that went to the labor board or mediation.

“Every grievance I ever had I settled in this office,” said Pattullo, who served as head of the patrolmen’s union and later the superior officers union before becoming chief. “I’ve never gone to Boston” to resolve contractual or disciplinary issues.

“I sit with the unions and discuss the options and listen to their point of view,” he added. “Sometimes, we’d meet in the middle. But you can never be afraid to change your decision if you get more information.”

He had a close working relationship with all three unions — superior officers, patrolmen and dispatchers.

“They were always the first ones to step up and give back if the town was going through difficulties,” he said. “They were extremely good to work with, and I hope that continues.”

He had a similarly good working relationship with town officials, he said, adding that he would often call Town Manager Reginald “Buzz” Stapczynski at 6 a.m. to tip him off if something had happened overnight that he needed to know about.

But he does have some regrets — in particular, that he leaves the department without having solved the murder of an older couple at Orchard Crossing.

John Magee, 69, and Geraldine Magee, 67, were both found shot dead at their Orchard Crossing home on Dec. 14, 2011. Their bodies were discovered that morning by their daughter, who was dropping off her children at the time.

Pattullo said he and Keefe met recently with the Essex County District Attorney’s office to go over the case.

“It was important to sit down and go over all the parts of the case,” he said. “The DA (Jon Blodgett) has lit a fire under the case.”

He added, “It is not a cold case. It is an active investigation. It was a tragedy that is being actively worked.”

He said he wished the murder had been solved quickly, but that it is “not an easy case.” He declined to be more specific since it is ongoing.

“I’ve always tried to do what’s best for Andover and the citizens,” he said. “I’ve stressed integrity and honesty, so that no matter what happens at the end of the day, when you walk out the door, you can hold your head up.”

He said sometimes the decisions he has made have rankled some, because he didn’t always make the easy decision.

“I got that from my dad,” he said, referring to his late father, Hector, who served for 37 years on the Andover Police Department, retiring in 1991 as a lieutenant. “My dad passed away 11 years ago, but I talk to him every day. He instilled that in all of us.”

His father was born in Andover — at his home on North Main Street — and Pattullo himself grew up in town, the last true “townie” to serve as a department head in Andover.

An older brother, Donald, retired from the Police Department in 2008 with the rank of detective sergeant.

Aside from having fewer locals running town departments, there have been other changes in Andover as well.

He said the traffic, due to skyrocketing population fueled by commercial and residential growth, has led to occasionally gridlocked streets and busy downtown intersections.

“Traffic is the biggest thing I’ve seen in 32 years on the force,” he said. “Just the amount of vehicles coming in and the industry we have. Side roads weren’t even paved when I started. The school system has grown. The downtown business district is larger and more vibrant.”

The population of the town shoots up to 65,000 during the day, when people from across the region pour into the community to work at local businesses.

While those may be good attributes for economic development and a rising tax base, they create challenges for law enforcement and public safety, he said.

“We’ve had no increase in the number of officers, but the technology has changed,” he said. “We used to have just one portable radio. Now we have laptops in all the cars, defibrillators in the cruisers, patrol rifles for the officers.”

He said changes in the department are often spurred by events outside the community, like Columbine, Colo., where a pair of student-gunmen went on a rampage and killed 12 students and one teacher and injured two dozen more students.

That led to a closer working relationship with local schools and “changed the way we police.”

The shooting at Edgewater Technology in Wakefield in 2000 altered how departments train. Officers are now armed with Tasers and pepper spray.

“When stuff happens, it changes things,” he said. “It changes the direction of a department.”

The latest incident was the Boston Marathon bombing, which has changed how police handle large crowds, he said.

Another major change he has seen is the rising use of drugs, particularly heroin.

“We have a drug problem in town,” he said. “There’s a lot of heroin and prescription drugs.”

Prescription drug use leads to heroin use, said Pattullo, who has counseled many families about what to do with a child who’s hooked on heroin. Some kick them out of the house. Others try to work it out.

“Heroin is used by a wide spectrum of people,” he said. “We have had people die of heroin overdoses in million-dollar homes. It’s a huge, huge problem.”

But those problems will be for the next chief and his team to tackle. Pattullo said he’s leaving the department in capable hands.

“There are 74 people here and they are professional and well-qualified,” he said.

As for Keefe, he said, “Pat is a great guy. He’s been a great asset to the department. He’ll do it his way.”