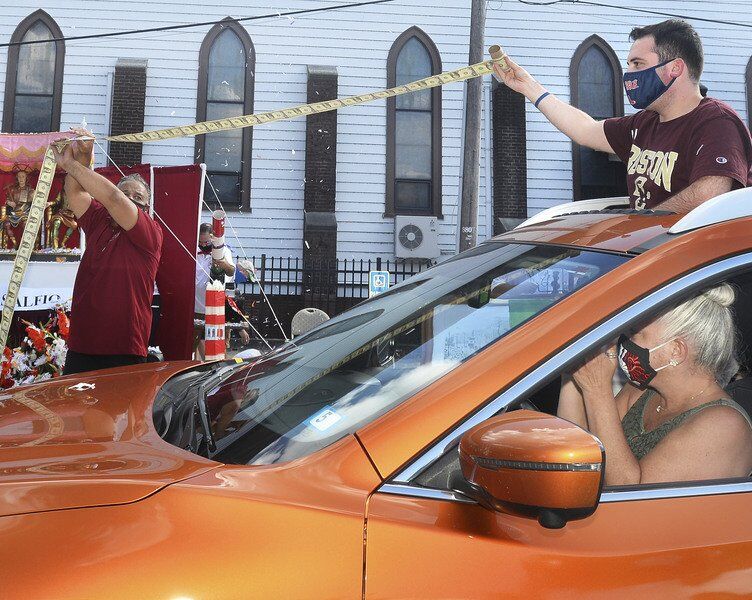 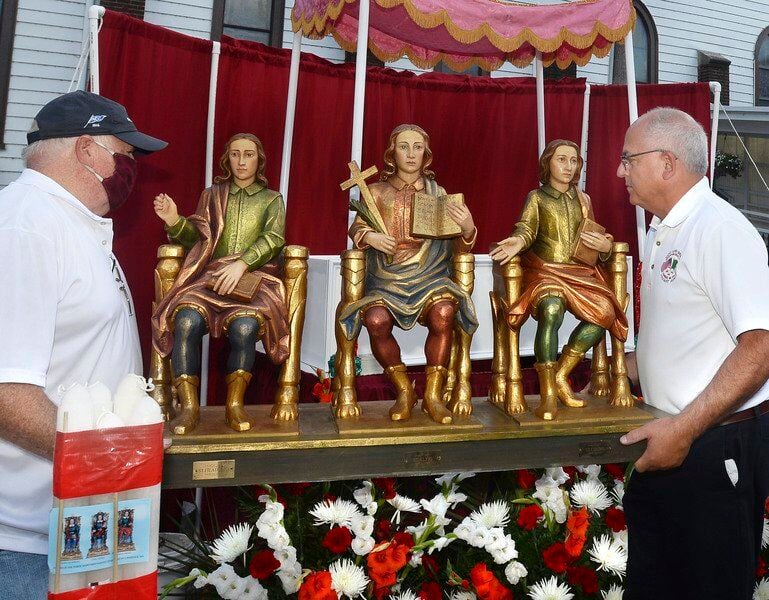 CARL RUSSO/Staff photosSt. Alfio Society members Domenic Messina of Haverhill, right, and Peter Messina of Methuen (no relation) prepare the statues for the drive-by feast Sunday during the Feast of the Three Saints in Lawrence.

CARL RUSSO/Staff photosSt. Alfio Society members Domenic Messina of Haverhill, right, and Peter Messina of Methuen (no relation) prepare the statues for the drive-by feast Sunday during the Feast of the Three Saints in Lawrence.

LAWRENCE — Ron Vallante, a 68-year-old Italian American, has been going to the Feast of the Three Saints since he was a child.

“Going to the feast is something that’s part of us,” he said. “Many times, I have asked the three saints for some blessings and believe me, they have come through.”

Normally, the Feast of the Three Saints overtakes the streets of Lawrence with the sound of live music, the scent of Italian cuisine and a confetti-covered procession. That confetti was made possible in part by Vallante, who has been shooting it off roofs during the event’s procession since he was a teenager.

“Years ago, I started with the confetti off the roofs and I was 14 years old and I did that for like 30 years and I loved it,” he said. “I’d get choked up every time we were doing it.”

But due to the coronavirus, there won’t be any confetti for Vallante to shoot over the procession this year. That’s because the event was reduced to a drive-by viewing of the saint statues in the Corpus Christi parking lot.

“It’s something. There are people who wait all year to see the saints,” said Tony Palmisano, spokesperson for the St. Alfio Society, which has hosted the feast since 1923.

Both a religious festival and a celebration of Italian culture, the Feast of the Three Saints celebrates three Catholic saints — St. Alfio, St. Filadelfo and St. Cirino — brothers who were martyred for their faith almost 1,800 years ago.

The St. Alfio Society was formed by Sicilian immigrants from Trecastagni who came to Lawrence about the 1890s to work in the textile mills. The feast was a tradition that originated in Trecastagni.

“Trecastagni is the home seat of the three saints in Sicily, so this is their tradition,” Palmisano said. “Normally, May 10 is the day that this is celebrated over in Sicily, but because the majority of the Italian Americans back in the early ‘20s working in the mills could not take the day off, Labor Day weekend was the only time (to hold the event).”

The St. Alfio Society was more than a conduit of culture for immigrants coming to Lawrence.

In the 1920s, the society was also a lifeline for paying members who didn’t have health care. It provided “death benefits” and health care to members who couldn’t receive them through their workplace, according to the organization’s website.

“Back then, the vast majority that were members of this organization worked in the mills and if you had an accident, there was no such thing as workman’s comp,” Palmisano explained.

“If you worked, you got paid, you didn’t work, you didn’t get paid and people had accidents, people had injuries, people had illnesses,” he said. “So, the society basically would front the money to that injured person until they got back on their feet.”

Today, the St. Alfio Society has continued its rich history of “mutual soccorso,” or mutual aid, by providing scholarships and doing charitable work in the community.

“We give out scholarships to local high school students, we support other nonprofits, we have been supporters of Lawrence Little League, Lazarus House, Holy Rosary Church,” Palmisano said.

But for Vallante, the feast is more than an event put on by a nonprofit — it’s a way of life.

“It just makes you feel like you are really a part of the city and part of the St. Alfio Society,” Vallante said, later adding, “Nothing interferes with the feast.”

For those who would like to experience the feast but could not attend, the event’s organizers have assembled clips from previous feasts and posted them on the society’s Instagram page, www.instagram.com/3SaintsFeast/.