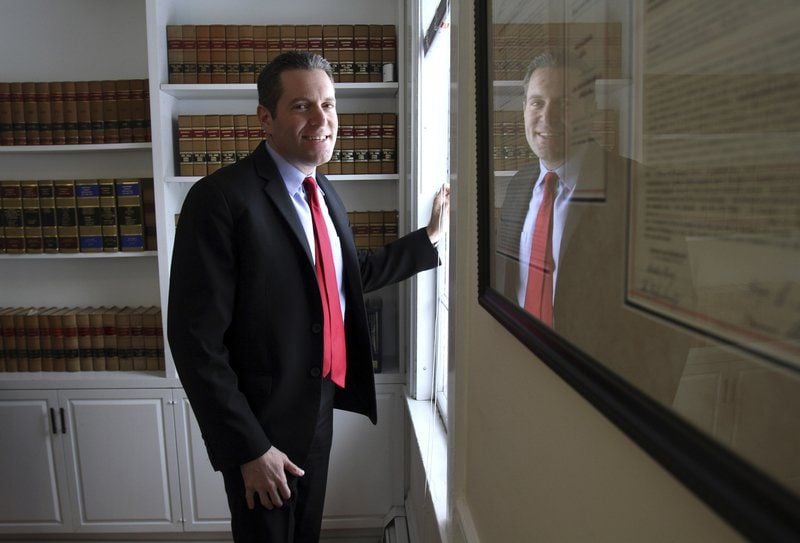 AMY SWEENEY/Staff photoDeparting state Sen. Barry Finegold reflects on his last days in public office from inside his law practice on Essex Street in Andover. 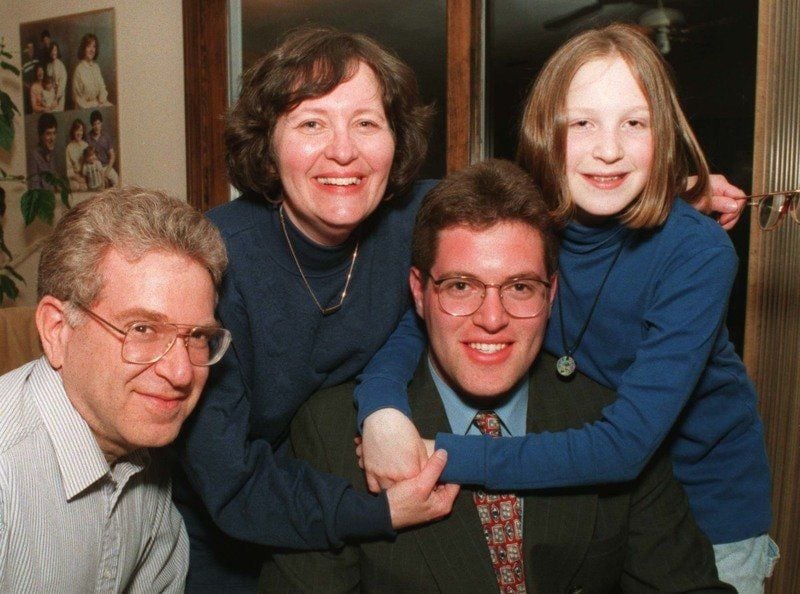 File photoBarry Finegold, 24, was surrounded by his family, including father, Michael; mother, Sondra; and younger sister, Diana, following his win as the youngest member of the Andover Board of Selectmen in March 1995. 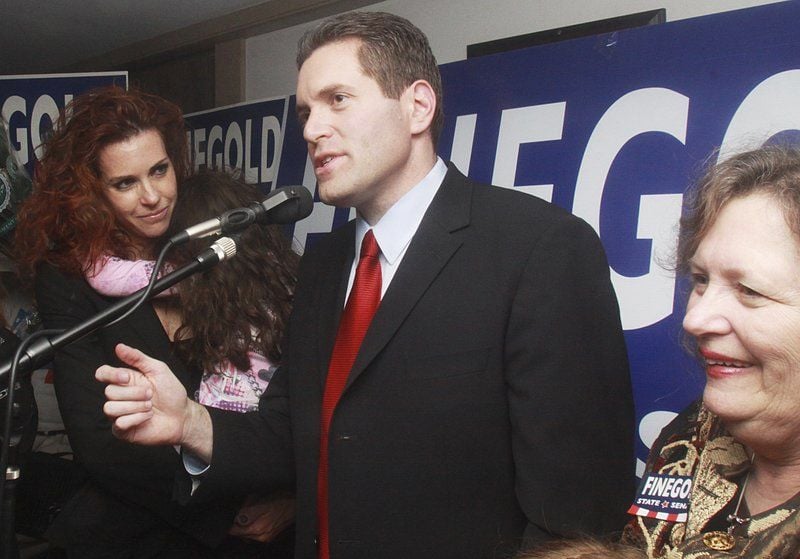 File photoBarry Finegold thanked a large crowd of supporters at Palmers Restaurant and Tavern on Election Day in November 2010 after winning his first term as state senator. His wife, Amy, left; their daughter Ella, then 5; and his mother, Sondra, look on. 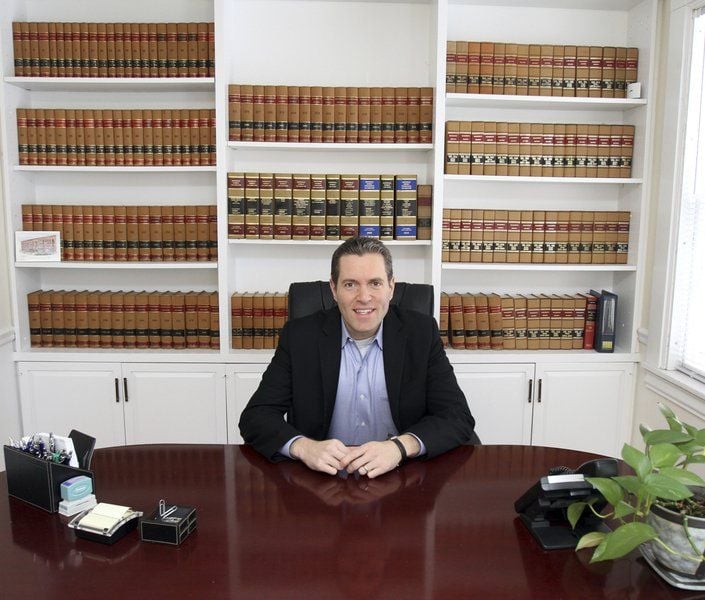 AMY SWEENEY/Staff photo As a property owner downtown, Barry Finegold says he wants to continue to play a role in shaping the community in the years to come. 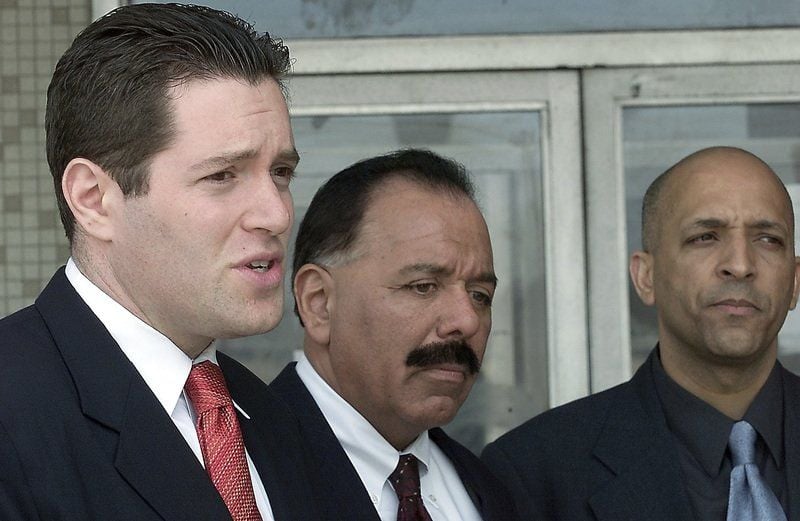 File photoState Rep. Barry Finegold, left, stands with former Lawrence Police Chief John Romero, center, and former Lawrence Mayor William Lantigua in front of the Lawrence Boys and Girls Club to discuss their effort to create a no drug zone near the club in 2004.

AMY SWEENEY/Staff photoDeparting state Sen. Barry Finegold reflects on his last days in public office from inside his law practice on Essex Street in Andover.

File photoBarry Finegold, 24, was surrounded by his family, including father, Michael; mother, Sondra; and younger sister, Diana, following his win as the youngest member of the Andover Board of Selectmen in March 1995.

File photoBarry Finegold thanked a large crowd of supporters at Palmers Restaurant and Tavern on Election Day in November 2010 after winning his first term as state senator. His wife, Amy, left; their daughter Ella, then 5; and his mother, Sondra, look on.

AMY SWEENEY/Staff photo As a property owner downtown, Barry Finegold says he wants to continue to play a role in shaping the community in the years to come.

File photoState Rep. Barry Finegold, left, stands with former Lawrence Police Chief John Romero, center, and former Lawrence Mayor William Lantigua in front of the Lawrence Boys and Girls Club to discuss their effort to create a no drug zone near the club in 2004.

Growing up, Barry Finegold said he was always good at two things: arguing and playing Monopoly.

For the last 20 years, Finegold has spent much of his time arguing.

Elected as a Democratic state representative in 1996, he fought for the voters of the 17th Essex District, comprised of Andover, Tewksbury and Lawrence, for the next 15 years.

Next, as a state senator, he went to bat for voters in the four communities of the 2nd Essex and Middlesex District for another four years.

Last year, he was ready to fight for all Massachusetts taxpayers as state treasurer, but he lost the election to a well-funded opponent. Now, he says, it’s time to focus on his other passion — monopoly.

As a successful real estate lawyer, Finegold has already put together an impressive portfolio of properties in Andover that he either owns or co-owns with business partners. Most recently, he and his partners announced a multi-million upgrade of Old Andover Village, now Andover Village Square.

He owns other properties downtown, including the historic Musgrove Building on Post Office Avenue and two office buildings at 26 and 34 Essex St. He is also part-owner of a business condo at 1 Elm Square. In addition, he owns a unit in Balmoral Condos and lives with his wife, Amy, and their two daughters at 42 Stirling St.

Aside from his work on behalf of Andover voters over the years, the 43-year-old Finegold will continue to have an impact on the streetscape of the community for years to come, as restaurant tenants like Brasserie 28 provide outside dining during warm weather months and Andover Village Square opens an outdoor plaza, among other amenities.

“I’m someone who wants to improve the downtown,” he said. “It’s a thrill.”

Where he got the arguing or Monopoly gene is hard to figure.

Finegold was born in Norwood, spent his early years in Hyde Park, and moved to Tewksbury at the age of 2 and then Andover with his father, Michael, and mother, Sondra.

Both of his parents were educators — his mother teaching special education in the Andover school system for 33 years and his father a music teacher at Northern Essex Community College in Haverhill for three decades.

Finegold’s parents raised a bevy of high-performers. His older sister, Joanie, worked as a foreign service officer at the U.S. State Department in Washington, D.C., and taught at George Mason University.

His younger sister, Diana, was also drawn to the nation’s capital, where she works at the National Institutes of Health after getting a master’s degree in public health from Johns Hopkins University.

A proud brother, Finegold said Joanie at 22 was the youngest foreign service officer ever hired, while Diana is out “trying to make the world a healthier place.”

Talking about his older sister, Joanie, who died two years ago from lung cancer, is still difficult for him, though. To this day, he said, he doesn’t understand why she died.

“You don’t understand. Joanie never smoked,” he said. “She had lung cancer and never smoked. Why she had that, it’s hard to understand and accept.”

He added, “I ate all the same foods growing up. She didn’t get the lucky straw and we’re left trying to figure out why.”

But it’s also made him not take life for granted.

Even before he had his own family, a thriving business and political successes — and even prior to earning his law degree, Finegold found his calling to elected office and public service.

“I was a year out of college,” he said. “I wanted to get involved. My parents were teachers and the ‘helping-people’ gene is in our blood. I wanted to make a difference.”

At the age of 23, he put together a campaign for the Andover Board of Selectmen with the support of five people, two of whom were his parents.

“No one gave me a chance,” he said. “I took on two longtime incumbents — Gerry Silverman and Charlie Wesson.”

He ended up defeating 10-year incumbent Wesson and becoming the youngest selectman in Andover’s history.

“It was hard work, knocking on doors, getting a lot of people out to the polls,” he said. “I was 23 during the campaign, and I turned 24 in March. A week or two after my 24th birthday, I was a selectman.”

He attributes his victory to the town’s desire for something — or someone — different.

“At that point, the town was looking for a change and I represented that at that time,” he said.

In 1996, a seat opened up for state legislator from the local district. Finegold went up against Jim Fox, a local man with seven sons, all of whom were out campaigning for their father.

“It was a tough race,” Finegold said. “I felt like I had eight opponents. They were truly a wonderful family and it was a very competitive race, but we pulled it off.”

He won Andover by just eight votes, but earned a wider margin in Lawrence.

Campaigning in Lawrence for the first time was a bit different from his experience in Andover.

“I found it challenging,” he said. “There were a lot of elderly people, and me being Jewish, that was different. But once people got to know me, they liked what I had to say. And since then, I have come to love Lawrence.”

Over the years, Lawrence would love him back, helping him win five more terms as a state representative and two as a senator.

Finegold’s passion for service — and his zeal for doing the right thing — sometimes got him into trouble.

Early in his tenure at the Statehouse, he took on the top boss in the House of Representatives — Tom Finneran. The Boston politician ruled with an iron fist, keeping his legislators in line by doling out the best committee assignments, and the swankiest offices, to his supporters, and relegating opponents to lesser committees and the least-comfortable accommodations.

That ended up being Finegold in 1998 when he took on Finneran because “I didn’t like the way things were going.”

“I paid a price,” he said. “But that was the right thing to do — to take on the leadership. We tried to overthrow the speaker, but sometimes it’s better to do the right thing.

“I’m still friends with Tom Finneran today. I have a lot of respect for him. But I felt things needed to be done differently in the state. And now, because of my effort, we have term limits on the speaker and Senate president. It was worth having that fight.”

Finegold said he’s always been happiest when he could solve a problem.

“There was no problem too small. That’s the public life. It’s like golf — making that one good shot that keeps you coming back. You help one person, and you want to keep helping people,” he said.

“It’s never about fame, glory or marching in parades. It’s about helping people. That’s always why I’ve wanted to serve. It’s why I did what I did.”

Despite his basement office near the elevator shaft and the Statehouse post office, Finegold said he was still an effective legislator.

He helped Andover through the difficulties of a “terrible trash contract” that was bleeding town coffers dry. “I got help in funding,” he said.

Statewide, he was instrumental in passage of the Safe Haven Bill, which allowed mothers to drop babies off at hospitals, police and fire stations or an emergency room for up to seven days after their birth without the mother facing criminal charges.

“It’s the only bill I know that the pro-choice and pro-life community both supported,” he said, adding that it has saved countless lives and led to scores of happy adoptions.

He loved helping constituents who came to him to solve seemingly intractable legal or personal problems, like the time he helped someone from Andover get approval for free airline baggage checks for household and medical supplies destined for poor people in Guatemala.

His efforts on teen pregnancy also bore fruit, as the rates of teenage girls having babies have dropped dramatically, he said.

“There are less kids having kids than when I started,” he said, noting that he worked with the Mass. Alliance for Teenage Pregnancy, the local Boys and Girls clubs and other groups to educate young people. “It’s never been about abstinence and condoms. It’s about making decisions, self-esteem and finding alternatives. We’ve had big success.”

While people constantly ask him what he’s going to run for next, his answer is pretty simple:

“I enjoy being at the ice rink with my daughter, Ella, who is 9,” he said. “She plays in the Andover Youth Hockey Association. She just started. I never played hockey growing up. She’s pretty good. It’s exciting.”

He also enjoys spending time with his other children, Ava, 11, and Max, who is almost 3, and his wife, Amy, owner of the downtown women’s clothing boutique dresscode at 2 Elm Square.

“There are a lot of things I want to do in the private sector,” he said. “Who knows where my future may go. I’m not closing any doors.”

One thing he knows for sure, however, is that Andover is “at a crossroads” both in the School Department, where a new high school principal is needed, and in the Town Offices, where selectmen are searching for the next town manager.

“There are some big challenges in this community,” he said. “If I hold public office or not, I bleed blue and gold, the colors of Andover High. This town is near and dear to my heart and I’ll always be active in the community.”