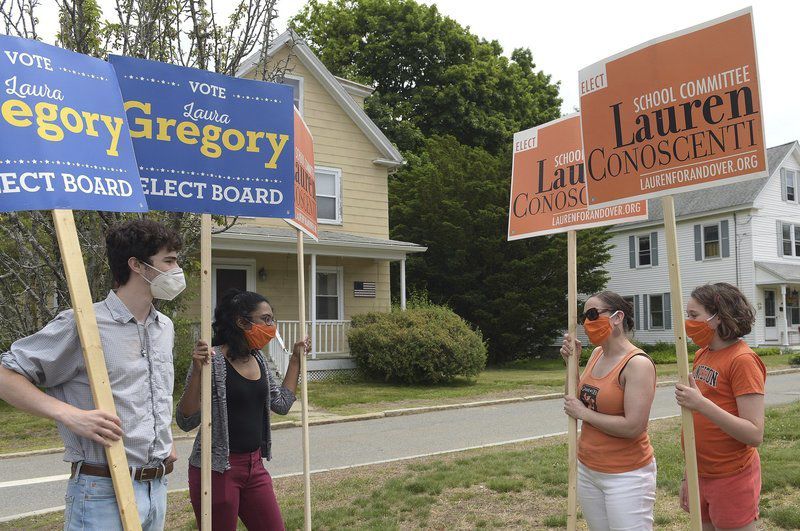 School Committee candidate Lauren Conoscenti and her daughter Madelyn Esposito, 11, right, talk with other sign holders Ethan Gasse, 18, left, and Taejasvi Narayan, 22, both of Andover, outside the Cormier Youth Center. 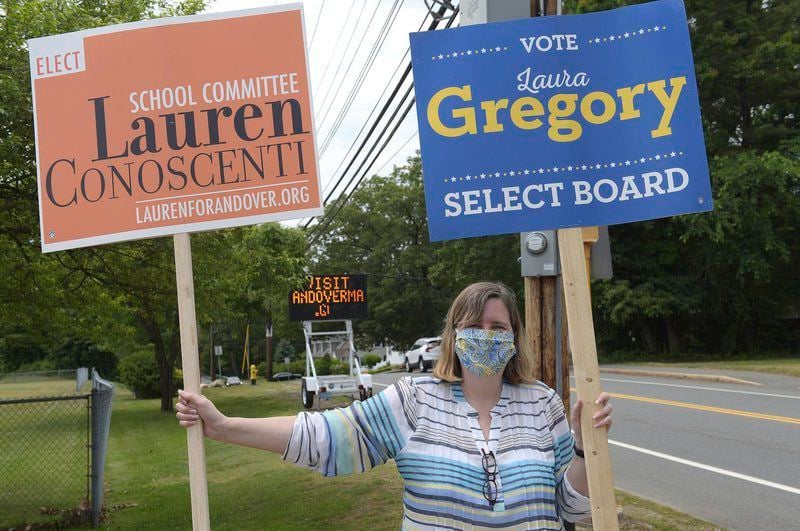 School Committee candidate Lauren Conoscenti and her daughter Madelyn Esposito, 11, right, talk with other sign holders Ethan Gasse, 18, left, and Taejasvi Narayan, 22, both of Andover, outside the Cormier Youth Center.

In an election that yielded a low turnout, Select Board incumbent Laura Gregory won another term and Lauren Conoscenti won a spot on the School Committee in the town’s two contested races.

Gregory won 71% of the vote, beating out her 21-year-old opponent, Stephen Prochniak, a student at UMass Boston studying politics who’s also in the National Guard.

Conoscenti, a data scientist at Tufts University with a Ph.D. in clinical psychology from Harvard, beat out her two competitors, Amy Hafensteiner and Shishan Wang, for a spot on the School Committee. Conoscenti won 52% of the vote, with a total of 1,328 votes. Hafensteiner came in second with 847 votes and Wang came in third with 367 votes.

Town Clerk Austin Simko said voter turnout this year was slightly more than 10% — low — due in part to the COVID-19 pandemic.

“I am not surprised the turnout is lower than it has been for some of our other local elections given the climate,” Simko said. “The turnout was a little over 10 percent and our 27 year average for annual town election turnout is 14 percent, so 10 percent is essentially two out of three voters who typically vote in this election did.”

Of those who voted, 37% voted by absentee ballot, for a total of 968 absentee votes.

“A very high proportion of the total turnout was absentee voting,” said Simko. “I think a lot of people were uncomfortable going to the polls and some of them decided to vote absentee and some of them didn’t vote and I also think the epidemic has distracted people and I think that an election in June for local races is something that may not be on people’s minds.”

Donald Schroeder and Paul MacKay each won one of two open seats to be Trustees of the Punchard Free School. Schroeder received 1,638 votes and MacKay got 1,444.

Margaret O’Connor won her uncontested seat with the Housing Authority with 1,996 votes. There were eight write-in votes in her race.