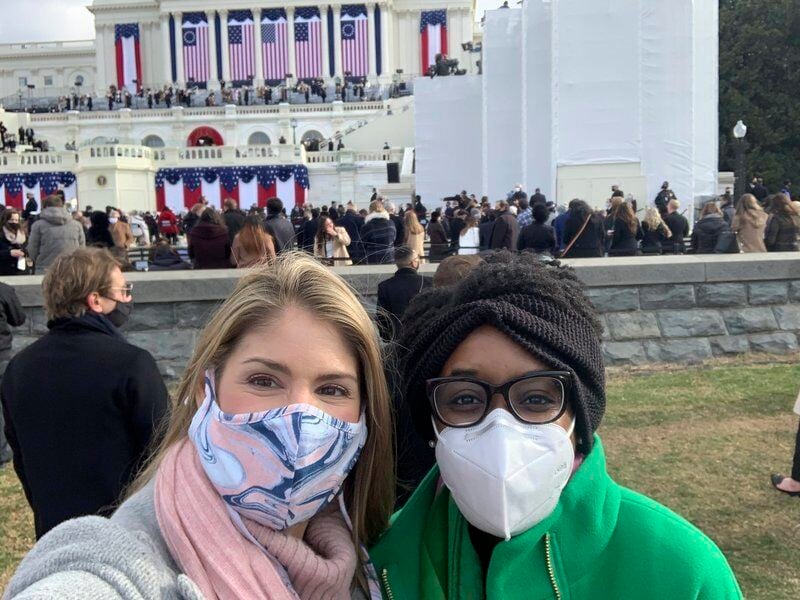 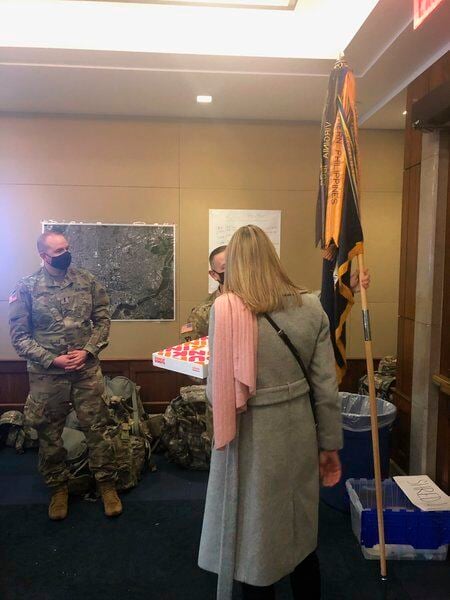 Courtesy photoRep. Lori Trahan, D-Mass., brings donuts to Massachusetts National Guard members stationed at the Capitol on Wednesday in the wake of the attack two weeks ago. Though the military presence is sad, she said, everyone was extremely grateful for their service and ensuring a transition of power."As I walked with other representatives on the Capitol lawn you hear people saying 'thank you' to the men and women who left their homes and families to protect us today."

Courtesy photoRep. Lori Trahan, D-Mass., brings donuts to Massachusetts National Guard members stationed at the Capitol on Wednesday in the wake of the attack two weeks ago. Though the military presence is sad, she said, everyone was extremely grateful for their service and ensuring a transition of power."As I walked with other representatives on the Capitol lawn you hear people saying 'thank you' to the men and women who left their homes and families to protect us today."

In the midst of a pandemic, the 2021 inauguration was always going to be more somber.

After the attack on the Capitol two weeks ago— where President Joe Biden and Vice President Kamala Harris were sworn in — the unprecedented military presence in the nation’s capital made it an even more sober event.

It was an “extraordinary moment in history, but extraordinary because it was ordinary” just like the 45 preceding presidential transitions, Congressman Seth Moulton said.

“It showed that democracy has prevailed, tradition has carried on, despite President Biden’s predecessor’s effort to upset it,” Moulton said Wednesday shortly after attending the inauguration in Washington, D.C. “I think all of us believe America has a bright future ahead — and we weren’t always sure of that in the past four years.”

Moulton — a Democrat from Salem, Massachusetts, who represents part of the Merrimack Valley — was among the few people, including members of Congress, allowed to attend the ceremony at the U.S. Capitol.

U.S. Rep Lori Trahan, a Westford Democrat, who was struck by Biden’s message of unity and mending divisions.

“Disagreement is American,” she said. “We can’t allow that to make us adversaries.”

Trahan said she and others felt their Republican colleagues on Capitol Hill were also inspired by Biden’s message.

“What Biden is inherently better at than most is that he’s explicitly said he’s not just the president for the people who voted for him, but for everyone,” Trahan said.

“I walked back with Republicans and there was no criticism. It was a feeling it was a new day,” Trahan said. “At the end of the day, I was sent to Washington to get the job done and deliver to the people of the 3rd District (of Massachusetts). And that’s why I’ve worked with my Republican colleagues.”

Biden has laid out a $1.9 trillion plan to help the economy, get children back to school and vaccinate people, which local legislators agree with.

“Working families are in dire need of more help now to stay afloat. Their inadequate $600 survival checks have been spent already, their children are hungry, and another rent payment is due on Monday,” Trahan said. “They simply can’t afford to wait for Republicans in the Senate to stop feigning concern over the same budget deficit that they couldn’t have cared less about over the past four years.”

“President Biden has shown in his first week in office that he knows what it takes to tackle COVID-19 and deliver for Americans struggling to make ends meet,” His relief package meets the gravity of the moment facing working families in Lawrence, Methuen, Andover, and communities across the Third District, and we need to get it passed into law as soon as possible.”

The legislators also found hope in this particularly historic inauguration, where Harris became the first Black, South Asian and woman to be sworn in as vice president.

“I wanted to remind (them) of this unbelievable moment of the swearing-in of the first woman. The first Black woman. The first Asian American woman. They are likely to never see a presidential debate stage without that kind of representation,” Trahan said. “And that’s markedly different from my upbringing.”

“I was particularly moved, especially seeing our first Black and South Asian Madam Vice President Harris get sworn in by our first Latina Supreme Court Justice Sotomayor. It was certainly a moment of immense pride for what this momentous occasion represents and the message it sends to all people that your gender and race do not limit what you can accomplish,” said Nguyen, who is the first Vietnamese-American woman in the legislature. “The hope of those who are firsts is that they will not be the only one, and that the door has been swung wide open for others to follow.”