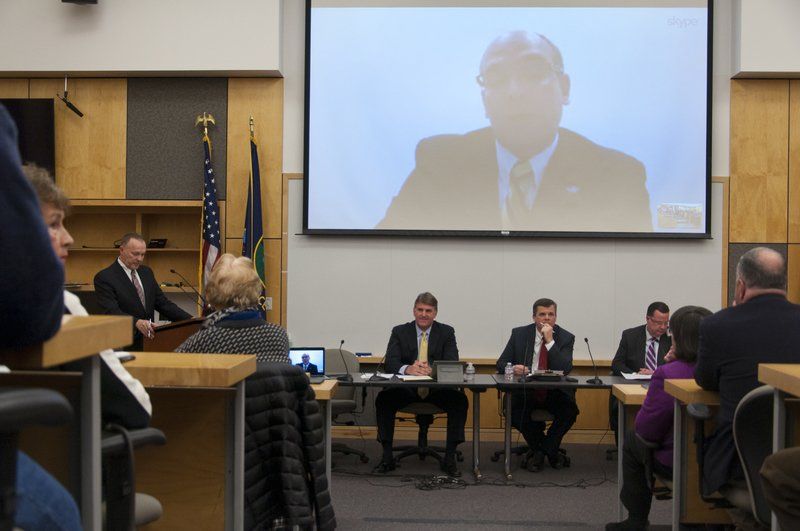 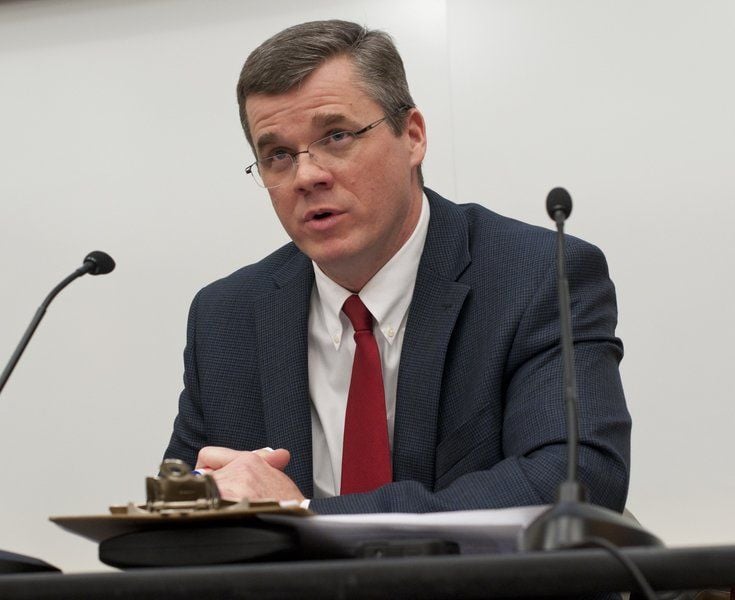 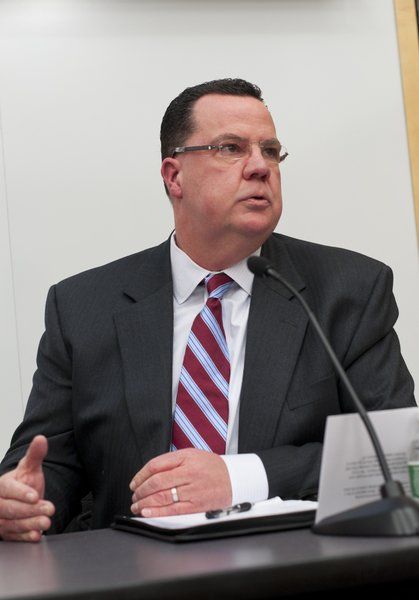 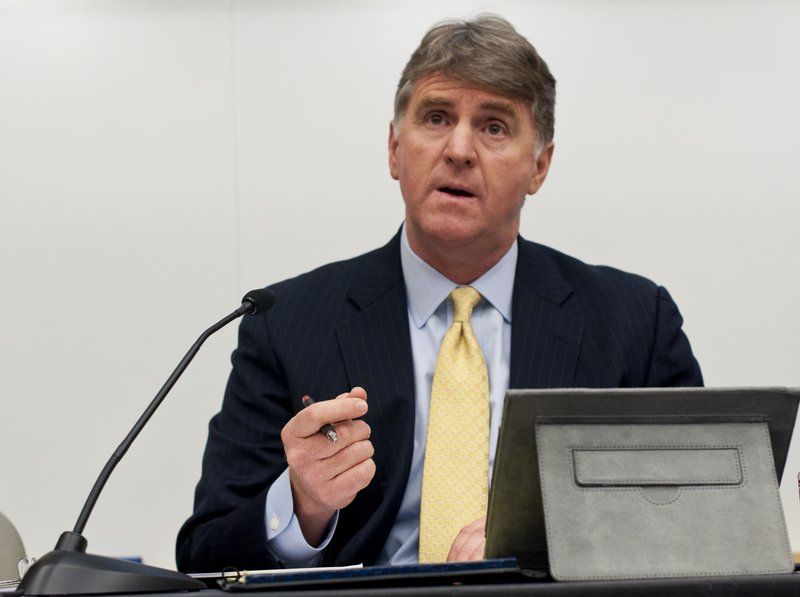 Photo by Allesandra BisaltiCandidate Bob Landry discusses his platform for seeking election to the Board of Selectmen. 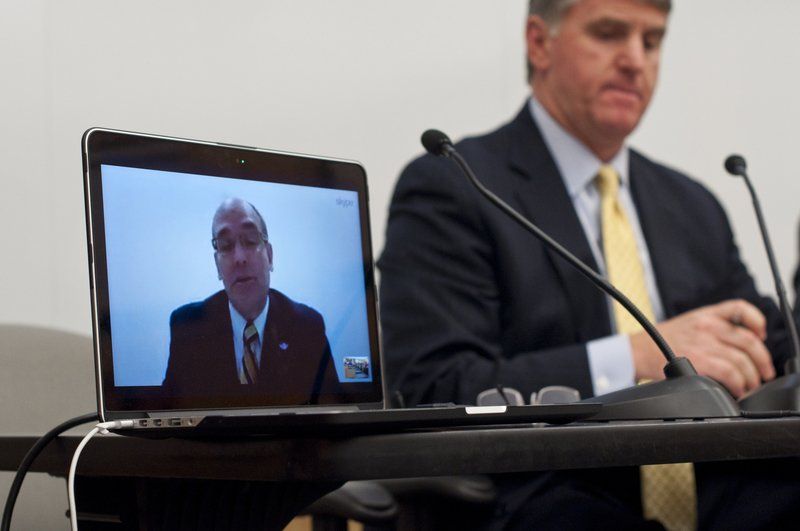 Photo by Allesandra BisaltiCurrent Selectman Brian Major, who was traveling last week, participated in the forum via Skype. 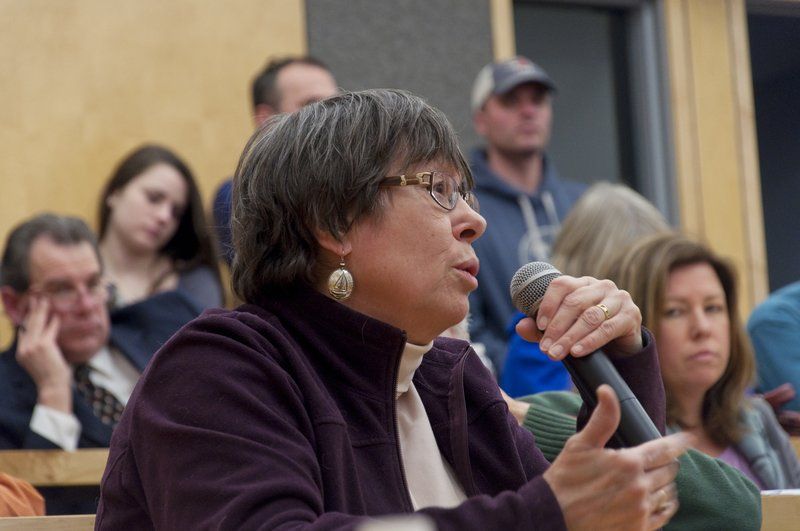 Photo by Alessandra BisaltiMolly Bicking asks the selectmen candidates about their management styles and if they are capable of collaborating in a successful, non-counterproductive way during a candidates night hosted by the Service Club of Andover at the Public Safety Center last week.

Photo by Allesandra BisaltiCandidate Bob Landry discusses his platform for seeking election to the Board of Selectmen.

Photo by Allesandra BisaltiCurrent Selectman Brian Major, who was traveling last week, participated in the forum via Skype.

Photo by Alessandra BisaltiMolly Bicking asks the selectmen candidates about their management styles and if they are capable of collaborating in a successful, non-counterproductive way during a candidates night hosted by the Service Club of Andover at the Public Safety Center last week.

Candidates for the Board of Selectmen last week staked out starkly different positions during a political forum at the Public Safety Center.

With a standing-room-only crowd of nearly 70 people watching, debate centered around spending and budget issues, but also touched on the search for a new town manager and improved government transparency, among other issues.

“I’ve spent the last couple years shedding light on financial conditions in this town,” said challenger Bob Landry, one of the co-founders of a watchdog website. “Tax bills are growing at an unsustainable rate; spending and tax policies are out of touch with the residents.”

Landry went on to criticize one of his opponents, 18-year incumbent Brian Major, for being part of the problem — specifically for not being able to find a solution to the town yard relocation project and for overseeing the rising cost of retiree health care and pension liabilities.

“I’m campaigning on accountability,” Landry said. “Does Mr. Major take any personal responsibility for the town yard and our long-term obligations exploding?”

Major, speaking remotely via a video screen because he was traveling out of town, said selectmen need to look at all of the community’s needs, adding that many other projects aside from the town yard have been completed during his tenure.

It was just one of several exchanges throughout the evening between the four candidates running for two, three-year seats in the March 24 town election. Joining Major and Landry in the race are current board Chairman Dan Kowalski and challenger Neil Senior. The forum was hosted by the Service Club of Andover.

“With all due respect to Mr. Major, the town yard and budget problems have been going on for years,” he said, adding that a vote for Major would be a vote for “more of the same” and “kicking the can down the street” on solving the town’s budget woes.

Both Major and Kowalski replied that being a selectman requires looking at all the needs and demands on the town and then making a decision.

“Being a selectman isn’t about one thing,” Kowalski said.

The four candidates had different ideas about what to do with the town yard — the municipal services facility located between downtown and the train station. For years, town officials have sought to move it and make way for retail and residential development.

Major said the town should work with the state to build a parking garage near the station that could also be used to store town vehicles. While part of the municipal services’ fleet could be housed there, the rest of it could be put in other locations throughout town.

Kowalski said the town yard issue was “complex” with “multiple solutions,” but that there is time.

“We got 9 feet of snow and the buildings haven’t collapsed,” he said. “We need to identify long-term solutions.”

Senior said the property should be redeveloped so that it brings in revenue and that the revenue should then be used to pay for a new town yard elsewhere.

“The new project can’t cost more,” he said. “It has to be a net profit for the town.”

“We have the solution right in front of us,” he said. “Leave it there.”

He noted that the employees who work there like it and the people who want to move it need to come up with a viable proposal of their own.

“I understand folks who want to move it,” he said. “But we’ve been trying for years from every different angle. We can’t do it.”

On the question of the town manager search as Reginald “Buzz” Stapczynski prepares to retire June 30, there appeared to be widespread agreement that whomever is chosen needs to be a proven leader with union-negotiating skills.

Landry said the recent, poor marks from selectmen on Stapczynski’s performance “point to the need for a new brand of leadership. ... We need a proven leader with a lot of experience who is a skilled negotiator.” He said the next town manager needs to be a “fiscal conservative who supports transparency.”

Major said the qualities he would look for include someone who is a “problem solver” and who “gets along with everyone to find solutions.”

Kowalski said he was looking for someone who was an “active listener” who would help bring together disparate community groups.

“We need someone who will consider all the facts and make sound decisions,” Kowalski said, adding that it should be someone who has worked in a silmilar-size town who is able to “think outside the box. We need someone who is not afraid to shake things up a little bit.”

Senior said he would seek someone who “holds people accountable,” who can work collaboratively with others and who is on the same page as the rest of the town leadership. “The next town manager needs a vision and needs to be able to execute on it,” Senior said.

All the candidates agreed the public should play a role in choosing the next town manager, through focus groups or a search committee.

When asked if taxes were too high, nearly everyone agreed they were, but they disagreed on what to do about the problem.

Kowalski said the board is currently trying to tie the budget to a “reasonable tax increase” for residents that also protects the high level of services people have come to expect.

Senior said the town needed to “build the budget off a 0 percent increase” as if the law had changed and “you couldn’t raise taxes.” He said it was “disturbing” that every department in town was seeking an increase in the budget.

Landry said the town didn’t get into its current position “overnight and won’t get out of it overnight.” He said the next town manager, with the support of selectmen, would need to “get to the root of it,” which is collective bargaining and retiree benefits.

Kowalski countered that it “sounds well and good to say, ‘build the budget to a 0 percent tax increase. But due to the issues associated with municipal contracts, we’d have to lay off teachers, firefighters and police officers. We have to be practical.”

Landry said the real problem is that town and school leaders aren’t looking at “total compensation” when coming up with their annual budgets. He said the town now pays $5 million a year into its retiree health insurance fund when it should be paying $13 million. The only way to cut that cost, he said, is to reduce benefit eligibility.

Major came to the defense of the town finances, saying Andover was just one of 11 communities in the state with a AAA bond rating and has one of the lowest tax rates among comparable communities.

He said by paying an additional $1 million a year into the town’s pension liability, as proposed in this year’s budget, “that will shorten our pension liability by eight years and reduce our long-term taxes by $82 million.”

Major also said there were “many things” the town could do to reduce expenses, including having the new teen center cleaned by volunteer members from Andover Youth Services rather than by a paid custodian, which is how it’s done in North Andover. He said the town is also working on a deal to purchase solar tax credits, which would reduce the town’s energy bills.

Finally, Major said, the town should buy streetlights from National Grid — also something done by North Andover — which would save money in the long run.

Senior, too, pointed to North Andover as an example in offering free, full-day kindergarten to the community, while Andover charges $4,500 a year, the highest fee in the state, for the program.

“They increased the number of students and increased the amount of state aid,” Senior said. “I don’t see this kind of creativity or vision in Andover.”

The Townsman is publishing a series of candidate profiles leading up to the March 24 town election.