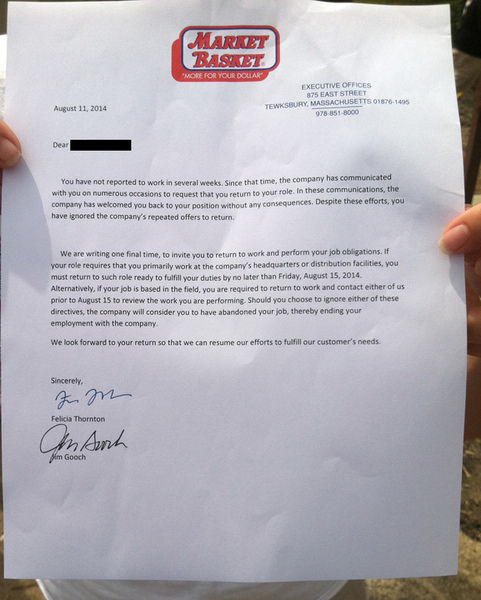 About 200 protesting Market Basket employees received this letter Tuesday warning them they will be fired if they do not report to work by Friday. The employee's name as been blacked out by request. 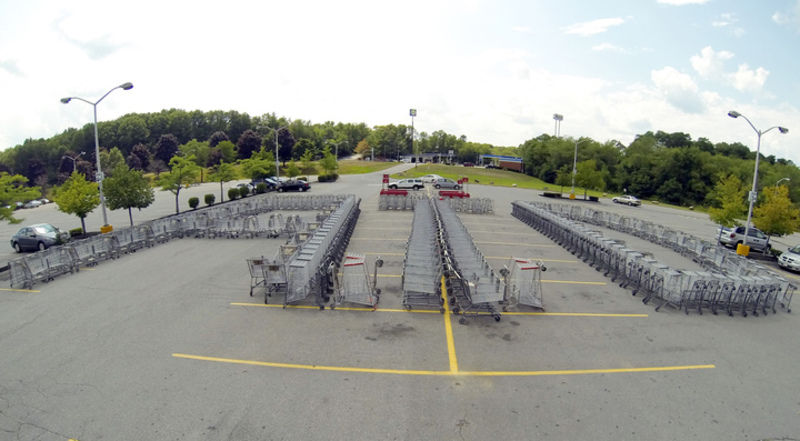 About 200 protesting Market Basket employees received this letter Tuesday warning them they will be fired if they do not report to work by Friday. The employee's name as been blacked out by request.

Market Basket’s co-CEOs issued what they said was a final warning to about 200 employees that they must report to work by Friday or lose their jobs, according to letters that arrived at employees’ homes Tuesday morning.

Friday will be four weeks since more than 550 warehouse workers and dozens of employees at corporate headquarters walked out, demanding the return of former CEO Arthur T. Demoulas.

The company already has issued statements offering employees a way back to work without consequences and letters threatening to withhold pay and now an explicit threat of firing if they fail to return.

“We are writing one final time to invite you to return to work and perform your job obligations,” the CEOs, James Gooch and Felicia Thornton, wrote in identical letters sent to about 200 employees.

Employees who are based at headquarters are to report by Friday, they said. Those whose “job is based in the field” must contact either CEO to review the work they have performed before Friday.

“Should you choose to ignore either of these directives, the company will consider you to have abandoned your job, thereby ending your employment with the company,” they wrote.

The executives have warned in the past few weeks that those not reporting to work would have their pay withheld, and suggested people would be replaced by saying the company would “begin advertising for employment opportunities” for those who refused to return to work by Aug. 4.

Thornton and Gooch in a statement Tuesday afternoon said the ongoing walkout has left them with no choice and emphasized the employees are the ones leaving their jobs.

“Since July 17, approximately 200 associates who work at headquarters and the distribution centers have failed to report to work, despite several company communications requesting they do so,” they said. “The company has not taken any action in response to their absence, but is left with no choice but to make this last request. The company will of course follow all applicable laws should these associates choose to abandon their positions.”

One employee, among about 100 protesting and picketing outside company headquarters on East Street in Tewksbury Tuesday, said she was worried about what would happen, but several others said each warning and letter has made them more determined.

Lori Scott, an executive receptionist, said Tuesday’s letter, which arrived by FedEx, was the first direct communication to her from the company. “They know where we are, just across the street,” she said.

Several employees dismissed the threat as a scare tactic. “It just fires us up even more,” said Ann Rogers, who works in accounts payable.

John Jurczak, who works in accounting, questioned the independence of the three members of the board of directors, who are appointed by all Demoulas shareholders and are to be unaligned with either side of the family. “Is this in the best interest of the company?” he said.

Corporate and warehouse employees walked off the job July 18 to protest Demoulas’ June 23 firing, and since have led a picket of the company’s headquarters and advocated a boycott of the 71-store supermarket chain.

Store managers and employees have gone to work as scheduled, but the warehouse shutdown left stores empty of perishable groceries. Sales are down by 90 percent in many stores, managers have said.

The company held a three-day job fair in Andover last week, saying it was hiring store managers, assistant managers and key corporate positions. A few dozen people in total showed up to apply as employees and customers picketed, but the executives established an email address for people to send applications and resumes.

Demoulas is negotiating with his cousin and rival Arthur S. Demoulas in an effort to purchase Arthur S. and his family’s shares in the company.

A flurry of abrasive statements from both sides last weekend indicated there are at least two main hangups to a deal: Financing for Arthur T. to buy out his cousin and Arthur T.’s status while the deal is finalized. Arthur T. has offered to return as CEO immediately, which he said would bring back all the employees and customers loyal to him.

The board of directors has said only that it offered to allow Arthur T. and his management team, including those who were fired or who resigned in protest, back in the company to assist in its operations, though specifically not in control of the company, while reaffirming its support for Thornton and Gooch.

Arthur S.’s family has said they are prepared to sell to Arthur T.