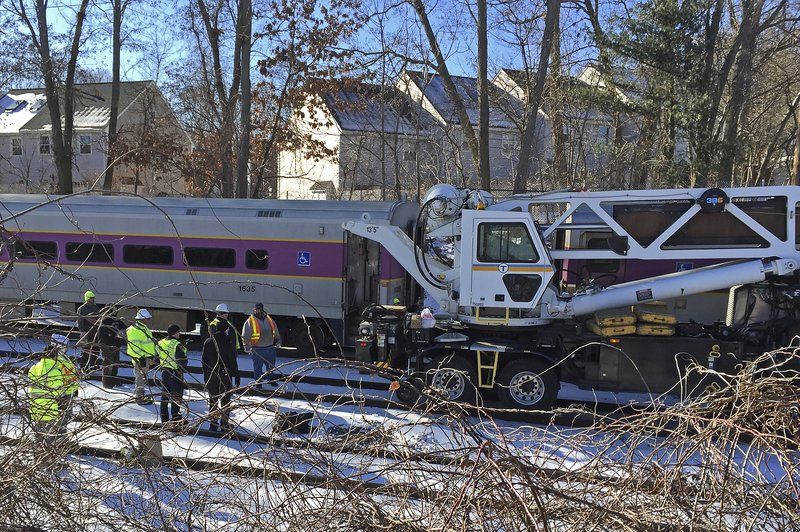 MBTA officials use a crane to get a train on tracks off of Route 28 in Lawrence near the Andover line. 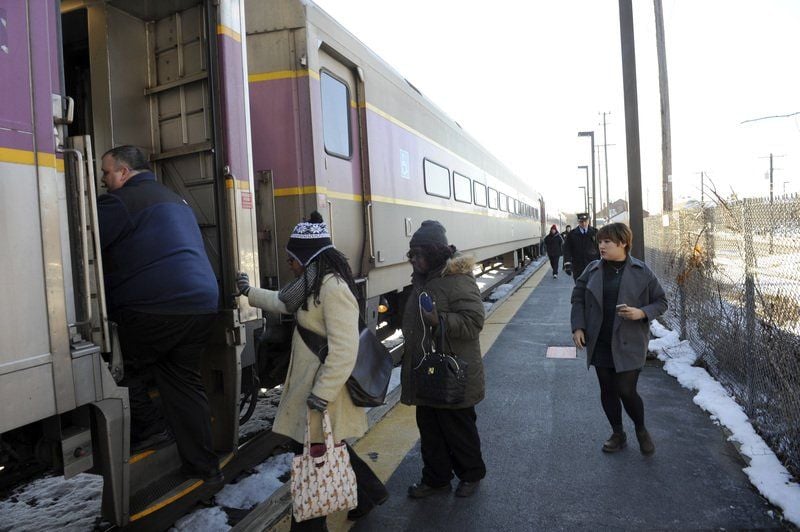 Commuters board a train at the Andover Station. Commuters were bused to the station because of a derailment of the MBTA commuter rail train between the Andover and the Lawrence line. 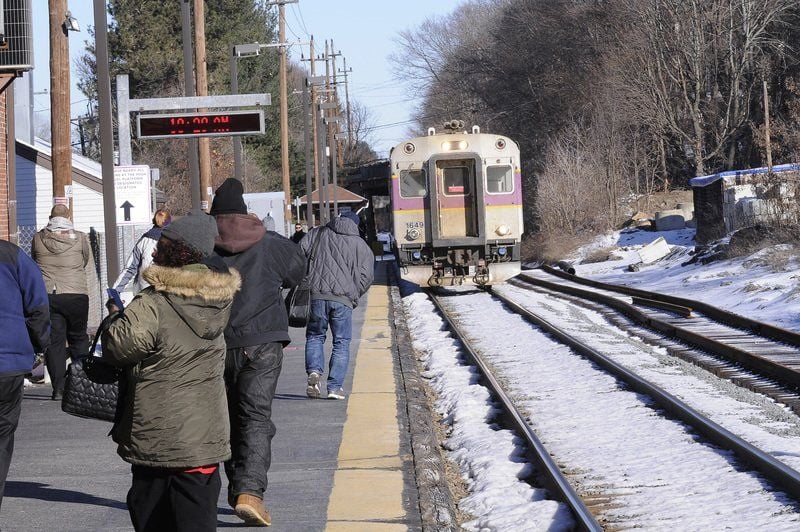 Commuters walk to get on a train at the Andover Station. Commuters were bused to the station because of a derailment of the MBTA commuter rail train between the Andover and the Lawrence line. 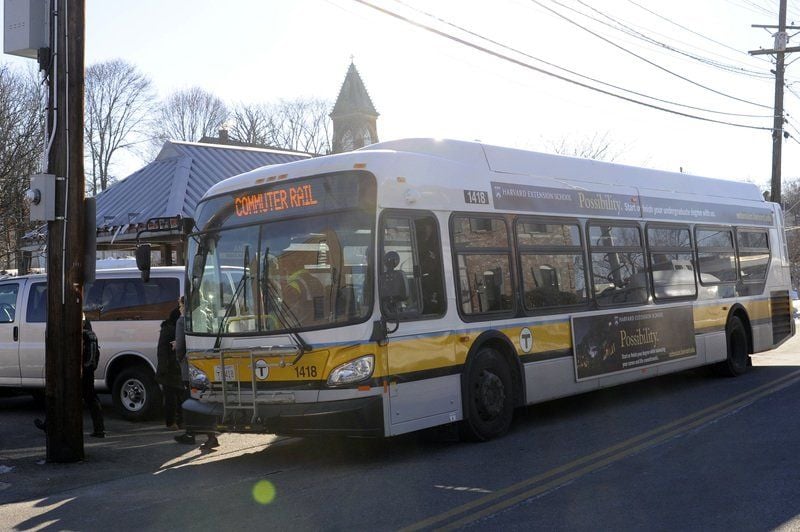 A MBTA bus drops off commuters at the Andover Station. The derailment caused delays and cancellations for commuters. They relied on shuttle buses or waited at stations in frigid temperatures before hopping aboard their trains.

MBTA officials use a crane to get a train on tracks off of Route 28 in Lawrence near the Andover line.

Commuters board a train at the Andover Station. Commuters were bused to the station because of a derailment of the MBTA commuter rail train between the Andover and the Lawrence line.

Commuters walk to get on a train at the Andover Station. Commuters were bused to the station because of a derailment of the MBTA commuter rail train between the Andover and the Lawrence line.

A MBTA bus drops off commuters at the Andover Station. The derailment caused delays and cancellations for commuters. They relied on shuttle buses or waited at stations in frigid temperatures before hopping aboard their trains.

The mishap remains under investigation but no foul play was suspected. Instead, it is believed the two-day cold snap may have contributed to the break.

Nonetheless, federal officials weren’t taking any chances, as National Transportation Safety Board investigators were on the scene, as were officials from the Federal Railroad Administration, local and State Police and the Transit (MBTA) Police.

The derailment caused delays and cancellations for commuters along the Haverhill to Boston line, who relied on shuttle buses or waited at stations in frigid temperatures before boarding trains.

It was traveling 56 mph, he said, an appropriate speed for that stretch of track, which is rated at 60 mph, when it derailed as a result of a break in one of the steel tracks.

It took a while for the train to actually stop - finally coming to a halt hundreds of yards down the line in Lawrence, near 609 South Union St., just beyond the Andover town line.

“In general, it takes a while for a train to stop,” Johnson said.

Andover Fire Chief Michael Mansfield said that when the train derailed, the wheels damaged a long portion of the track before the train came to a complete stop.

‘A lot of questions’

Secretary of Transportation Stephanie Pollack said in a hastily organized press conference yesterday afternoon that freezing conditions were to blame, noting that the track became frozen and broke.

While confirming that officials don’t suspect foul play, Pollack conceded that the break was unusual.

“In a typical winter we’ll have a dozen breakages,” Pollack told reporters at a press conference. “But this time, it’s not that typical -- the track shattered.”

Keolis - which operates the commuter rail system - is supposed to inspect the lines twice a week.

One possible explanation is that rail line had been “heat-treated” in the past -- a process whereby the track is heated and cooled to improve its performance, Pollack said.

“There’s a lot of questions that have to be answered,” she said.

State Police issued a statement Tuesday evening concurring with Pollack that there was “no evidence of interference or tampering with the tracks” but that the agency “provided assistance to the U.S. Department of Transportation and Transit Police at today’s train derailment ... in Andover.”

The statement went on to say that the cause remained under investigation and that State Police personnel “provided assistance in securing affected portions of the track for analysis and handling other forensic duties, as well as in conducting interviews. ... No further information is being released at this time.”

The State Police also assisted with a track problem in Dorchester Tuesday.

The result was an interruption in the morning commute as up to 40 workers rebuilt the damaged portion of tracks while another crew, using a heavy crane, put the three, empty passenger cars back on the track.

Commuters scrambled aboard buses to take them around the blocked tracks in Lawrence.

At the Ballardvale rail station in Andover about 10:30 a.m., under a bright lemon sun and finger-numbing cold, Annie Yeung stood bundled in a parka. The Andover commuter was trying to get to her client support job in Boston.

“This is terrible,” Yeung said. “This is my third time here already. They keep cancelling.”

On a regular day the five cars on the first train typically carries about 200 passengers departing from Haverhill, at 5:05 a.m., to North Station in Boston, said Leslie Aun, a spokeswoman for Keolis Commuter Service.

Three of five passenger cars derailed, she said. The only people on board were the conductor and engineer and they were not injured. Keolis maintains the tracks for the MBTA.

Pollack said she is “confident” that the MBTA’s winter preparations will avoid the problems of 2015, when the commuter rail system ground to a halt amid a battery of winter storms.

“We need to get to a point where you can again rely on the MBTA for your commute, whether it’s snowing or not,” she said. “When we have days like today when not everything goes as it should, we’re going to get to the bottom of it, we’re going to fix, and we’re going to move forward.”

She said service on the Haverhill line had been restored and she expected a normal evening commute.

The situation was anything but normal yesterday morning as workers toiled to repair the damaged track and right the awkwardly leaning train. Meanwhile, onlookers watched as repair crews worked.

About 11 a.m., behind 609 South Union Street in Lawrence, Rick Nowell of Andover stood on a crest of snow above the tracks among a tangle of woody vines and watched Keolis crews hoist the derailed train car wheels back on the tracks.

He watched them attach a rolling crane cable to train car couplings, at the ends, and lift the train from the bed and on to the track.

“They (the wheels) were on the ground just, you know, a couple inches beyond the rail,” he said.

Residents who live next to the track were awakened in the early morning hours by unusual sounds.

The rail line runs behind homes along Arundel Street and Burnham Road in Andover.

Candace Westgate has lived at 87 Burnham Road for 23 years and is used to hearing trains banging and bumping. The tracks are about 10 feet from the back of her yard and Tuesday’s commotion awakened her.

“This was different than the (usual) banging,” Westgate said.

Neighbor Peggy Rambach is also familiar with train sounds at her track bordering residence, 1 Arundel St., but Tuesday’s disturbance awakened her from a deep sleep.

“I heard a kind of a big ‘wunk’ sound,” said Rambach, who was questioned by a police officer at her residence yesterday morning about whether she heard anything suspicious before the crash. She said she didn’t, and simply went back to sleep after being awakened.

It wasn’t until she was walking her dog around 9 a.m. that she saw dozens of railway workers and public safety officials swarming the area behind her house.

The Federal Railroad Administration said it had three inspectors on site investigating the cause, and the MBTA had to inspect the repaired section of track, along with signals and any switches within the derailment area, as required by federal regulations,” a Federal Railroad spokesperson told the State House News Service.

Aun said the section of rail where the track broke had been last inspected by Sperry Rail on Dec. 19.

Gabriella Cruz and Christian Wade contributed to this report.