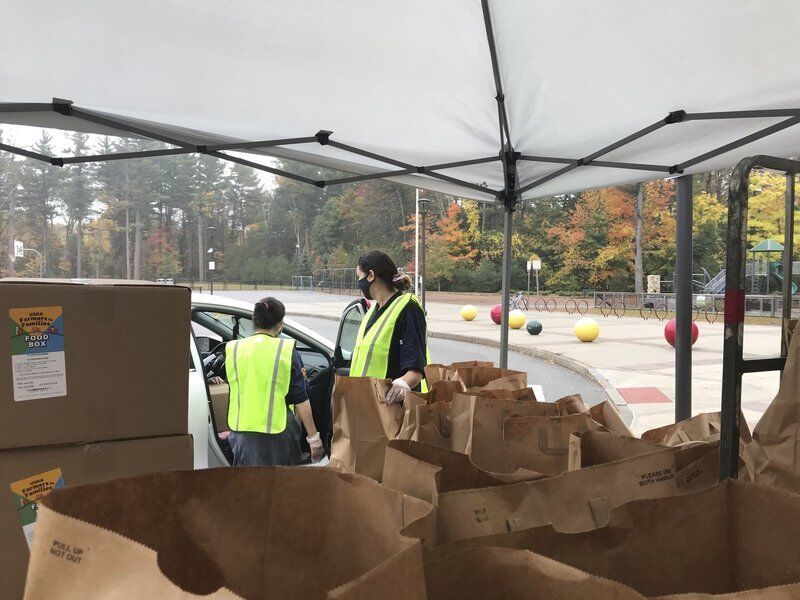 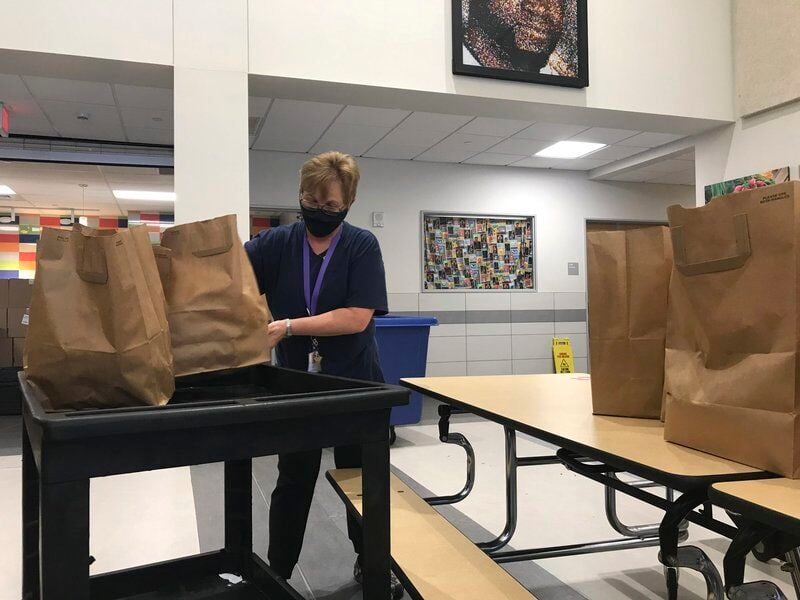 MADELINE HUGHES/Staff photo Cheryl Grieve, a cafeteria worker from High Plain Elementary and Wood Hill Middle School, packed brown bags of prepared meals onto a cart to bring outside as people came to Bancroft School to get free food on Oct. 21, 2020.

MADELINE HUGHES/Staff photo Cheryl Grieve, a cafeteria worker from High Plain Elementary and Wood Hill Middle School, packed brown bags of prepared meals onto a cart to bring outside as people came to Bancroft School to get free food on Oct. 21, 2020.

The pandemic has wreaked havoc on businesses across the Merrimack Valley — and all around the country for that matter.

“Anyone in business was impacted,” said Joe Bevilacqua, president of the Merrimack Valley Chamber of Commerce. “My fear is that when all this is said and done, we are going to find a large percentage of businesses that are closed or on the brink of being closed.”

Manufacturers have struggled to keep the supply chains open as regulations for quarantine vary from Massachusetts to New Hampshire, he said.

The health care industry took a financial hit as time and resources were devoted to fighting COVID-19, he added. Restaurants and bars — forced to close except for takeout and then open under strict capacity limits — are operating with reduced staff, if not closed altogether.

And of course, unemployment rates have ballooned.

In Massachusetts, unemployment skyrocketed to 15.1% in April in the immediate aftermath of the stay-at-home order, according to the U.S. Bureau of Labor Statistics. That number hit another record at 16.1% in July.

The most recent statistics show, at least, that the Massachusetts unemployment rate dropped to 6.7% in November. But that was before Gov. Charlie Baker reinstated stricter orders due to another spike in COVID-19 cases.

The increase in unemployment has lead to many people reaching out for housing and food assistance.

Nearly every week since the pandemic started, Andover schools' food service workers would distribute about 20,000 meals to families at Bancroft School. The program put in place by the U.S. Department of Agriculture helps feed children when they aren't in school and has also served as an important food distribution channel in town as they've seen an increase in need, Gail Koutroubas, director of food and nutrition services for the district, previously said.

The town has also used additional federal funding to help residents who cannot afford their rent or mortgage, by providing grants to people who have lost their jobs.

The town granted 55 rental and mortgage assistance loans through the program averaging about $1,500, said Denise Johnson, executive director of Andover Community Trust, the organization overseeing the program. About 80% of the applicants had one or more people in their households lose jobs because of the pandemic, she said.

Early in the pandemic, the federal government implemented an expanded unemployment insurance program that gave nearly everyone laid off across the country an extra $600 a week as incomes were quickly diminished because the system only pays a percentage of a worker’s wage.

Those increased extra benefits were reduced to $300 in August. That extra federal benefit has been expanded for 11 more weeks in the new year.

Across the Merrimack Valley, others are also feeling the financial pain.

At Lazarus House Ministries in Lawrence, there’s been an 81% increase in people at the soup kitchen and a 34% increase in families using the food pantry since March, said Danielle Tjalsma, director of communications.

More than 1,000 applications for rental relief are pending for Andover, Lawrence, Methuen and North Andover residents through the Rental Assistance for Families In Transition program, which typically can grant up to $4,000 a year, but has increased assistance to $10,000 this year. That includes 724 online applications in Lawrence, 250 in Methuen, 48 in North Andover, 34 in Andover, and the many paper applications that have come in, she said.

“What you are seeing now is for people who applied for under the $4,000 (earlier in the pandemic) are now applying for more because they’ve had to take a new job that’s lower-paying or they can’t go back to work because they have to homeschool their kids,” Connor said.

Communities also created their own rental assistance programs with federal aid. In the fall, the council opened up applications for the Emergency Solutions Grant that would provide assistance for up to 200 households in Lawrence. The council, however, received about 600 applications, Connor said.

Relief can’t come quickly enough for these families, and there’s likely going to be mass evictions when the federal moratorium is lifted, they warn.

Meanwhile, local business owners and their employees are clinging to hope as they try to make it to a post-pandemic world, gearing up for what they hope will be a positive 2021.