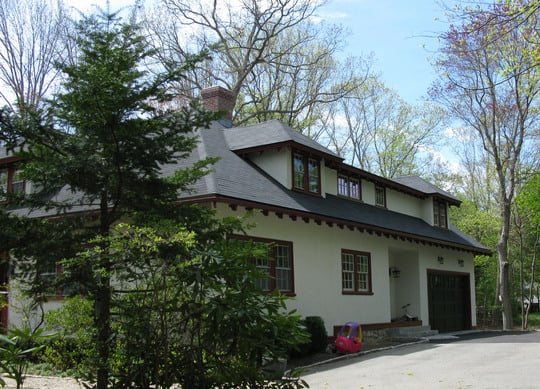 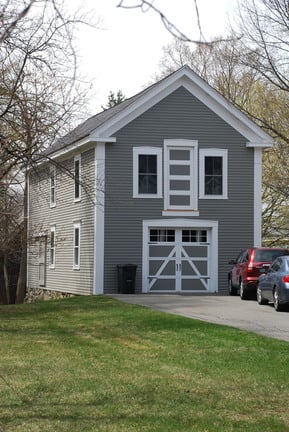 This building, which moved to 78 Maple Avenue in 1883, was originally the "Shawshin Engine House," an early firehouse. It was built in 1850.

This building, which moved to 78 Maple Avenue in 1883, was originally the "Shawshin Engine House," an early firehouse. It was built in 1850.

This year, the Andover Preservation Awards celebrates 21 years of recognizing individuals who have made significant contributions to preserving the historic and scenic character of our community. To celebrate this milestone, the committee, composed of members of the Andover Preservation Commission, Ballardvale Historic District Commission and Andover Historical Society, selected nine notable preservation projects to highlight.

The Awards Committee chose to recognize public buildings, residences, large and small, outbuildings, old and new construction. This is the architecture and design that makes our town unique.

The two-story wood-framed barn at 78 Maple Ave. is a wonderful example of early adaptive reuse of a former municipal building. This structure was once Andover's "Shawshin Engine House", built in 1850 on the site of the southern end of today's CVS Pharmacy on Main Street.

Originally the firehouse was 20' x 30' and housed the "Shawshin" fire pumper. A belfry and alarm bell were added in 1859. The upper floor had a large hall for meetings of the fire company members. In August 1870 the building was extended 10' to the rear for stalls for a team of horses. The structure was also raised 18" to accommodate a new steam engine, named "Andover" and built by the Union Machine Company at Fitchburg, Mass.

In 1883, a new fire station was erected on Park Street and the old building was sold. George S. Cole purchased the engine house and moved it to Maple Ave. and converted it into a carpenters shop. The current building, with sheds removed and wood clapboards renewed, reflects a faéßade restored to its original configuration. This structure also has the distinction of being the first building in Andover to raise the American flag from a staff at the beginning of the Civil War 150 years ago.

We thank the owners for recognizing the importance of caretaking of this unique building that reflects Andover's early fire fighting history.

Cornelius Cronin purchased the lot of land on Chester Street for $185 in September 1889 from William Townsend. The modest one and half story home was most likely completed the following year for the Cronin family who continued as owners of the property until 1940.

The architectural details of bracketed eaves and arched wood work on the front porch suggest the Stick Style elements of the Queen Anne style which borrowed from Classical and Gothic elements. Asymmetrical design with gable end to the street became a favorite house style of the late 19th century and is found on several homes in this historic district. The new roof dormer remains true to the period and style of this home. The color treatment choice punctuates the ornamentation of the building and delights the eye.

56 Salem St. was home to children's author, Munro Leaf, wife Margaret and their children who came to Andover during 1956-57 when their two boys were enrolled at Phillips Academy. Leaf was famous for his book "Ferdinand the Bull," writing 30 children's stories. "The Wishing Pool" was written in Andover from interviews with neighborhood children who often swam in the Leaf's swimming pool.

To build this 2,200 square foot modular house, Leaf contracted with architect, Carl Koch, once described as " the Grandfather of Prefab". Notably, Koch was the founder of Techbuilt homes. Margaret Leaf was instrumental in helping to design the house, which included special attention to landscape and views. Margaret would eventually going on to work for Techbuilt in design and sales.

In 2009, the Moulsons contracted with Mark Yanowitz of Verdeco Designs, to undertake a renovation of this historically important home. The result is a renovation and expansion that is sensitively designed to reference the original Leaf house, but built for 21st century living and energy efficiency.

The Awards Committee enthusiastically endorsed this project. The care and sensitivity with which the owners and architect approached this project demonstrates how taking a new look at "modular houses" often thought of as "tear downs" can excite the imagination for what is possible.

The Addison Gallery's website provides the best description of this project.

"In the summer of 2008 the Addison embarked on a two-year renovation and expansion project which has restored the museum's 1931 Charles Platt building and created a 13,770 square-foot addition."

"The new Sidney R. Knafel Wing, designed by Centerbrook Architects, provides a flexible, dynamic center for the Addison's education programs, enables the museum to store its entire collection on site, offers generous new art handling spaces, and consolidates staff offices. All gallery spaces in the original building have been restored, including the Addison's signature rotunda with its celebrated Paul Manship fountain. State-of-the-art climate control, lighting, and security systems have been installed throughout the building, ensuring the Addison's ability to provide optimal care for its renowned collection."

The Awards Committee recognizes the important place the Addison Gallery as an extraordinary art and educational institution holds locally, nationally and internationally. Their careful and sensitive restoration of an historically significant public building as well as the addition of a new wing to expand and enhance their educational mission, is a gift to us all.

The property at 15 Locke St. was once the backyard of E. Kendall Jenkins house at the corner of School Street and Locke Street. C. Lincoln Giles purchased the property in 1960 and subdivided it to create space for the construction of a small house that faced Locke Street. The house sits at the edge of the Main Street/Locke Street National Historic Register District.

Locke Street (named after the first tavern keeper) was laid out as a public street in 1869, but it was not developed until the turn of the 20th century, in the Colonial Revival and Shingle Style. The street is notable for its more unpredictable and inventive designs with their voluminous organic forms, lavish porches and large scale detail. Many residences are now multi-family. The old November Club, now the Unitarian Church, sits at the center of the neighborhood.

When the circa 1960 house at 15 Locke St. was slated to be demolished for new construction, the design of the new residence became critically important to maintaining the character of the surrounding historic neighborhood. Rob Bramhall of Rob Bramhall Architects, designed a home for contemporary living with historic references embedded in its detail. Positioning the house with a gable end to the street, substantial use of wood trim to frame the porch, column, pilaster and windows creates the sense of a more substantial house and allows for a gracious entrance that mirrors the streetscape.

Built by Margaret A. Towle in 1910 as the carriage house for 10 Porter Road, 33 Hidden Road was designed in the same Prairie School style of architecture. Popular from 1890-1930, this architectural style was more commonly found in the mid-western United States. Only a few examples exist in Andover.

Works of the Prairie School architects (also referred to as The Chicago Group), usually featured horizontal lines, flat or hipped roofs with broad overhanging eaves, windows grouped in horizontal bands, solid construction, craftsmanship, and discipline in the use of ornament. Prairie houses were designed to blend into the flat, prairie landscape. One of the key architects in this group was Frank Lloyd Wright who is commonly referred to as the master of the Prairie style.

In the early 1960s, C. Lincoln Giles subdivided the property at 10 Porter Road. Individuals bought lots and built homes within the 4 acre site bordered now by Lantern Road, Hidden Road and Alden Road. The 33 Hidden Road carriage house was subdivided from the main house and became a residence.

The current owners of 33 Hidden Road had clearly embraced the aesthetic of their house when they contracted with Mark Ratté© to design and build their addition and garage. The new design incorporates critical elements of the original structure including, the hip roof with its overhanging eave, a simplified side entryway, extended dormers, and the repetitive bracket work underneath the eaves that extends around the house.

This stately Victorian brick home is similar in style to the former Punchard - Barnard house at 8 High Street built in 1848 and the first Punchard High School built in 1856. With the gable end to the street in the manner of Greek and Gothic styles of the same period, the craftsmanship of the brickwork is exuberant in its detail. Quioning on the corners of the house, railings on the porch roof and bay window and the delicate porch columns make this early Victorian home a standout on the street. Every effort has been taken by the owner, Minh Huynh, to replicate the original look of the house in style and materials during its ongoing restoration.

Originally owned by Herman Abbot Jr. who operated a furniture business on the site of Memorial Hall Library, the property was sold to Orlando S. Morse in August 1855. Morse was a contractor who opened a nursery on his 2 acre lot and built a greenhouse in 1858. He advertised fruit trees in the local paper of the period. George R. Waterman and his wife Lucretia acquired the home in 1874. Mr. Waterman worked for the Pacific Mills in Lawrence. The property was subdivided during their ownership.

This stately home was built for Anna Foster on land conveyed to her by Daniel Abbott in 1870. The home is built in the style called French Second Empire, popular from 1855-1885. The mansard roof is the defining characteristic of the period style. Many older Andover homes had their roofs converted to this high style look, most notably the America House on Main Street. The roof provided for an additional full story above the second floor but was taxed at a lower rate as it was still considered attic or garret space.

The former side rear addition was completely gutted and replaced with the sympathetic addition that mimics the original look of the house. The entire house and garage were also renovated and restored during construction and updated for 21st century living.

Samuel & Constance Fuller acquired the property in 1901 and the Fuller family remained the owners for 63 years before selling in 1964. Christine and Curt Von Brawn purchased the home in 2004, undertook and completed this significant renovation project.

This impressive Craftsman style bungalow, once belonged to the Poor family. The address was originally 18 Poor St. William Madison Wood purchased this home from the Poors and called it Lake House for its close proximity to Mill Pond on the Wood estate. The address was changed to 298 North Main Street when Wood made Poor Street a dead end and the road in front of the house became a private way. Cornelius Wood, William Wood's grandson, was born in this house.

The Craftsman style architectural features of this house include, a low pitched roof line, deeply overhanging eaves, exposed rafters, decorative brackets under the eaves, a front porch beneath the extension of the main roof with large round supporting columns, six over one double hung windows and two decorative eyebrow roof dormers.

In 2010, Tom Childs was contracted by Cornelius Wood's wife Rosalyn, to undertake a complete interior and exterior renovation of Lake House, including the addition of a sunroom. It was a daunting task as the house was virtually unchanged from the original construction. Every surface on every floor had to be touched. All systems, plumbing, wiring and heating were upgraded. New lead paint laws required that all wood surfaces, molding, doors and windows had to be removed to be stripped of paint, then replaced. It was a obvious labor of love.

Research and photography were done by Karen Herman and Jim Batchelder.