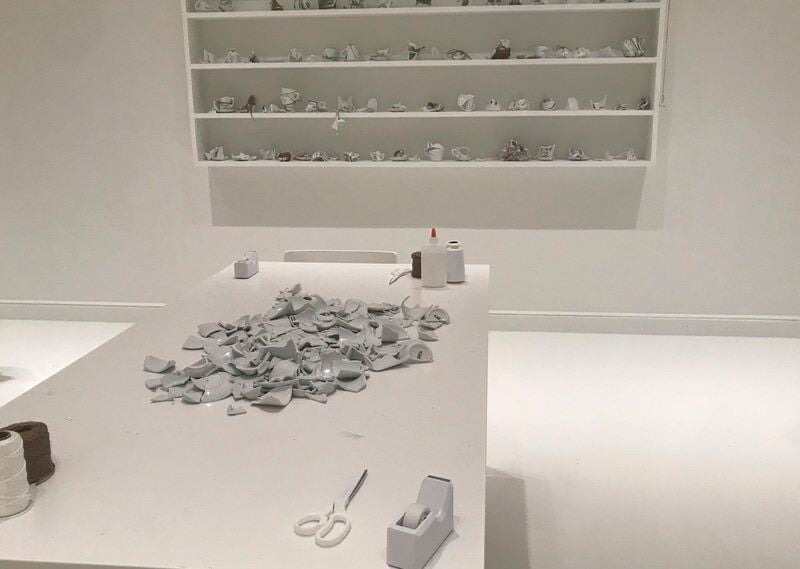 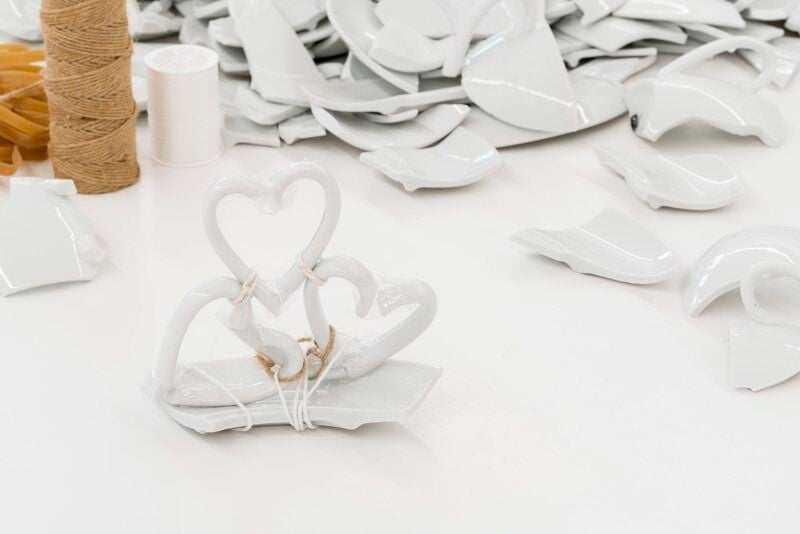 Courtesy photoThrough Yoko Ono's Mend Piece, someone used teacup handles to create hearts while the exhibit was on display in Vancouver. 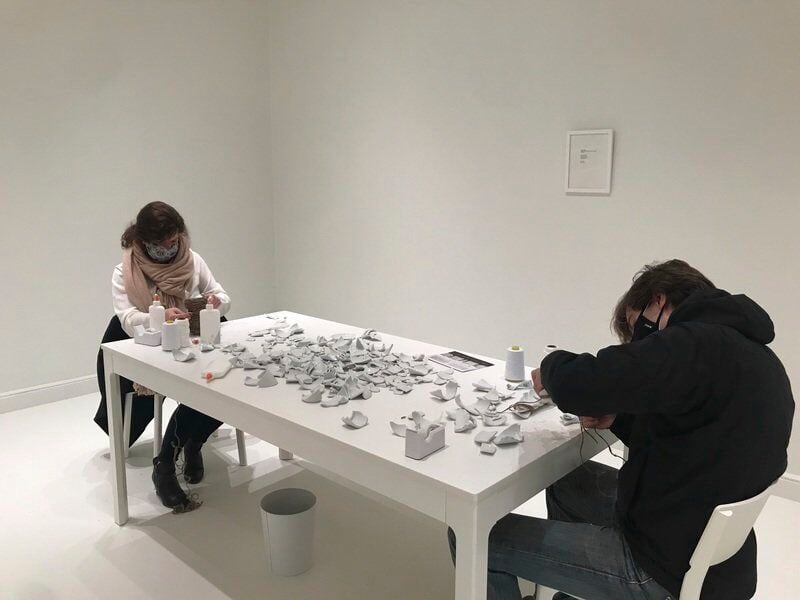 Courtesy photoThrough Yoko Ono's Mend Piece, someone used teacup handles to create hearts while the exhibit was on display in Vancouver.

The curators at Addison Gallery of American Art knew that January 2021 would be a time of transition, so they sought to bring Yoko Ono's Mend Piece to the Andover venue.

"Regardless of the outcome of the election, we knew January 2021 would be a time for" rebirth and reformation, said Gordon Wilkins, the Robert M. Walker associate curator of American art.

"We had no idea of how relevant it would be, especially after opening the exhibit right after the siege on the Capitol made it more timely," he said.

Originally created in 1966 and revived in 2015, Ono's traveling exhibit is participatory. When installed, it typically is planned as a large communal table with broken white teacups and saucers where participants create their own artwork from the chunky pieces, Wilkins explained.

The table sits in a plain white room with only a shelf for the artwork created to be displayed, he said.

The piece by Ono, widow of John Lennon of the Beatles, is inspired by the Japanese philosophy called Wabi-sabi, which is about embracing flaws or imperfection.

"As you mend the cup, mending that is needed elsewhere in the universe gets done as well,'' Ono has said about the exhibit. "Be aware of it as you mend.''

The gallery at Phillips Academy worked for about a year and a half to have the touring exhibit come to Andover, Wilkins said.

However, when the pandemic struck, Addison Gallery adapted the format to fit with pandemic health guidelines. The exhibit features three 6-foot-long tables with the broken china cups and saucer chunks down the middle placed 6 feet apart.

"Presented with shattered cups and saucers, participants are asked to bind the fragments together using common household items: twine, glue, scissors and tape," the exhibit's introduction reads. The resulting creations are displaced on nearby shelves, evidence of the power of collective action.

It's a popular exhibit, Wilkins said.

"It's really driven home how art doesn't have to be aesthetically pleasing," said Julian Azart of North Andover. "But it could be a feeling, like now putting things back together."

Wilkins worked with Ono and her team to ensure her message was preserved, despite having to make the health and safety adjustments. They broke up the large table and added more sanitizing to the exhibit to make it work, he said.

"It was pretty miraculous we were able to pull this off," Wilkins said. "The odds were so stacked against us. Some institutions would just have said 'no.' We demonstrated we could protect an artist's will and preserve health and safety at this moment."

The exhibit is the first at the Addison gallery since the start of the pandemic, Wilkins said. He believes what Andover created will be the model as it travels to more galleries over the next year, he said.

Ono's Mend Piece is on exhibit through April 4. The Addison Gallery of American Art is opened Fridays, Saturdays and Sundays. Admission is free, but reservations are required.