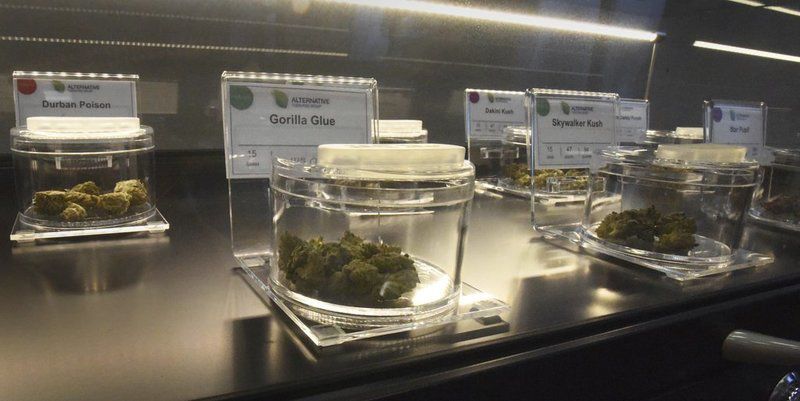 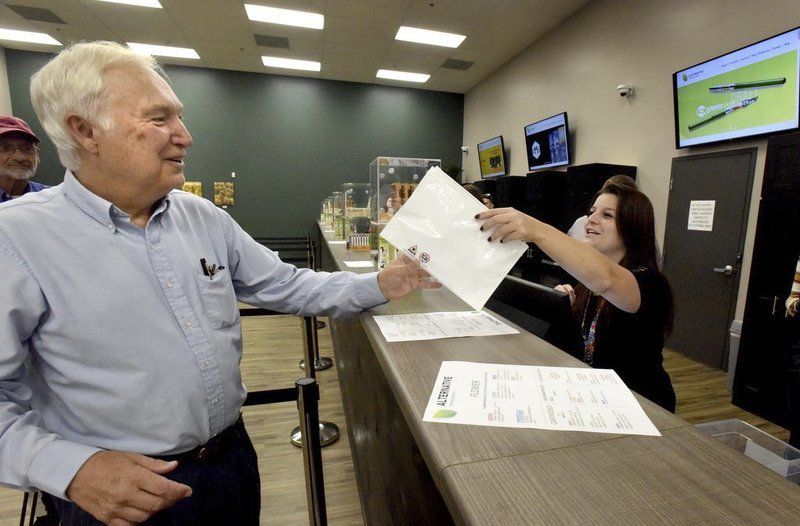 A few minutes before opening to the public last Wednesday, ATG served its first customer — former town selectman and Salisbury Chamber of Commerce board member Fred Knowles, who purchased 3.5 grams of "Golden Ticket" CBD (cannabidiol) flower and a prerolled joint of "Blissful Wizard" marijuana, which came to a total of about $75.

Upon walking into the shop, Knowles was greeted by a team of uniformed employees standing behind a long, wooden counter as music from Bob Marley played in the background.

To Knowles' surprise, very little of the shop's inventory was on display. Except for small samples of various marijuana strains and some glassware, most of ATG's products are secured in a locked door behind the counter that is accessible only to employees.

"I feel like I'm in a bank!" Knowles exclaimed before accepting his products inside a sealed white plastic bag. "This is a whole new world."

When doors opened to the public shortly after 9 a.m., security guards and police directed a line of about 20 eager customers inside to have their IDs scanned at a check-in window before entering the store.

Dan Talbot, president of ATG, said the first person in line showed up at 7:05 a.m. Talbot reported the store saw a steady flow of customers throughout opening day, but that the numbers never reached an excessive level.

Customers must bring valid, government-issued identification (a driver's license, passport or military ID) showing they are at least 21 years old. State law allows customers to buy up to an ounce of dried flower or five grams of cannabis concentrate.

To deal with an expected large crowd of customers, ATG designated a 100-space satellite parking area behind Sylvan Street Grille at 195 Elm St. Free shuttle buses will run to and from the store between 8:45 a.m. and 7:15 p.m. each day until further notice. Parking along Elm Street is prohibited. There is limited on-site parking for customers who have difficulty walking.

Attending the opening was Town Manager Neil Harrington, who said he was pleased to see it going smoothly and looked forward to the shop's contributions to Salisbury.

"I hope people will be patient. I understand the lines are going to be long today," Harrington said. "In the end, once the kinks are worked out and things are running smoothly, I think it will be a positive thing for the community in terms of the amount of revenue it will generate."

Cannabis consumption is prohibited on the premises and in the parking lot, satellite parking area and shuttle buses.

No appointments will be necessary for customers at the Elm Street store and all transactions will be cash only, according to the company's website.

Customers are asked to be respectful of the store’s neighbors and not to open their purchases while on a shuttle bus.

Customers found or reasonably believed to be illegally diverting cannabis will be banned from the store, the company said.

Talbot said this week he was excited to see the Salisbury shop open its doors after a lengthy approval process and that the shop's staff has been hard at work preparing for opening day.

"We're really proud of the team," Talbot said. "These guys have been training and getting ready for the opening, and they're a really passionate group of individuals."

He said while some people "have already made up their mind" about not condoning cannabis use, he feels that overall, more people are coming around to accept it.

"There is certainly a stigma but it's fading very quickly," Talbot said. "From a social perspective, I think it's a good thing."

When asked about his plans for the rest of the day, Knowles said his town duties would keep him from using his newly purchased goods.

"I have a meeting tonight with the Conservation Commission at 7 o'clock, so none of this will happen between then and now," Knowles said, still excited about his first retail marijuana experience.

"Back in the '70s, they didn't have shops like this," he added. "We've got to remove the stigma, especially for people that are 50, 60 or 70. Young people think nothing about that."