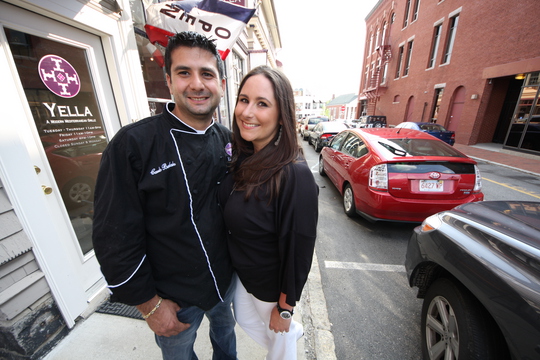 The owners of Yella Grill, outside their restaurant on Park Street. 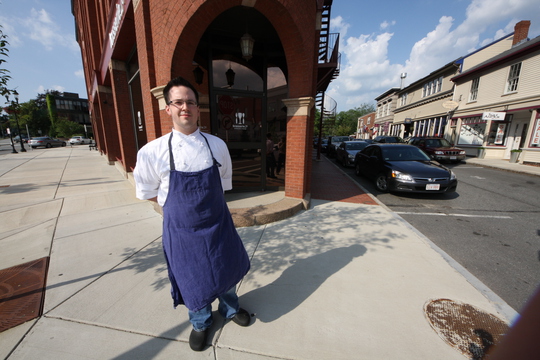 The owners of Yella Grill, outside their restaurant on Park Street.

The Zoning Board of Appeals approved outdoor dining on Post Office Avenue July 7, and selectmen amended their policies Monday to allow for alcohol to be served in public, outdoor areas such as sidewalks.

"This town has been known to be very quiet during the summer, and by allowing this you bring in more vibrancy to the downtown," Selectman Ted Teichert said.

The first change, voted unanimously by the zoning board, allowed for the creation of 16 outdoor dining spaces for restaurants on Post Office Avenue, which includes Yella and My Brothers Pizza. A maximum of 64 diners from the restaurants will be able to eat outside. Outdoor liquor licenses haven't been issued.

Yella and Brasserie 28, the later of which operates out of the Musgrove building on the corner of Post Office Ave and Elm Square, will likely amend their existing liquor licenses to allow them to serve alcohol outdoors, following the selectmen's vote Monday to change its policies. Chris Huntress, who represents Post Office Ave property owner Musgrove LLC, said, "We are pursuing an alcohol permit."

My Brothers Pizza does not have a liquor license, Town Clerk Larry Murphy said.

When the recently-approved outdoor seating begins, cars will still use Post Office Avenue as diners eat outside. Four parking spaces in front of Yella and My Brothers Place will have outdoor seating.

Closing the small, one-way street to cars is simply not an option for public safety reasons.

"You have to be able to get a fire truck in there," Building Inspector Kaija Gilmore reminded the board. "Those are wooden buildings down there."

Huntress said he has met with fire and police officials and public safety is a priority.

Plans also include heavy plastic planters, weighing 600-700 pounds each, that will bend if they get bumped, he said.

ZBA members agreed that downtown parking can be difficult, and no one likes to lose coveted parking spaces. But the outdoor seating is expected to be most crowded during off-peak downtown shopping hours.

"There is parking downtown," said ZBA member Nancy Jeton, "just not adjacent. You have to walk."

With the selectmen's vote, Brasserie 28 owner Matt Morello will now be able to move forward with bringing his customers outdoors during the summer months. He intends to use sidewalk space in front of his building, along Elm Square, facing Memorial Hall Library.

Public response to the idea has been mixed at previous meetings, but Bob Pokress, a Cherrywood Circle resident, said at Monday's meeting that allowing the serving of alcohol and food outdoors would make the downtown business district more of a destination.

"I travel a lot on business. Every community I go to where restaurants are able to serve on curb-side, sort of taking the Parisian model and extending it to communities in the U.S., has been extremely successful," Pokress said. "Restaurants that make it really appealing during warm weather to be able to dine outside are one of the best magnets for bringing people into a downtown community and making it vibrant for people in the town, and surrounding towns."

Now, with the board's support, Morello will need to apply for an outdoor dining license. The present policy allows outdoor seating only from April 1 to Oct. 31. Amending his existing liquor license could take some time.

"There is a very, I think, very comprehensive application process," Murphy said. "It's going to go around to police, fire, building inspector. They're going to have to present a detailed plan, a seating plan. If there's an alcohol license involved, it's also going to be reviewed from that perspective."

Matthew and Alison Morello, married owners of Brasserie 28, were happy with the outcome.

"There's nothing wrong with a husband and wife sitting outside and having a nice dinner," Alison Morello, said.

"All we're trying to do is extending dining for people to enjoy nice weather," Matt Morello said. "(The town officials) want the town to go forward. They all support small business."