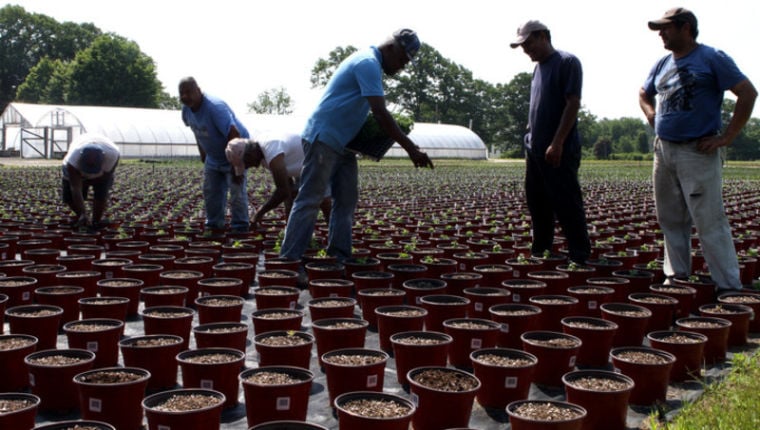 Workers at Dargoonian Farm, the last farm in Andover, plant about 30,000 mums this spring. In the summer, the fields are replaced with produce sold primarily to Market Basket. Come winter, the greenhouses will be filled with poinsettias. 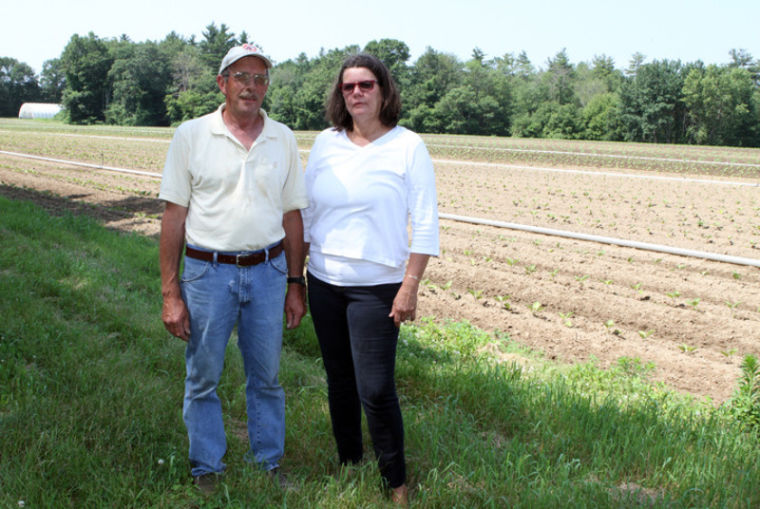 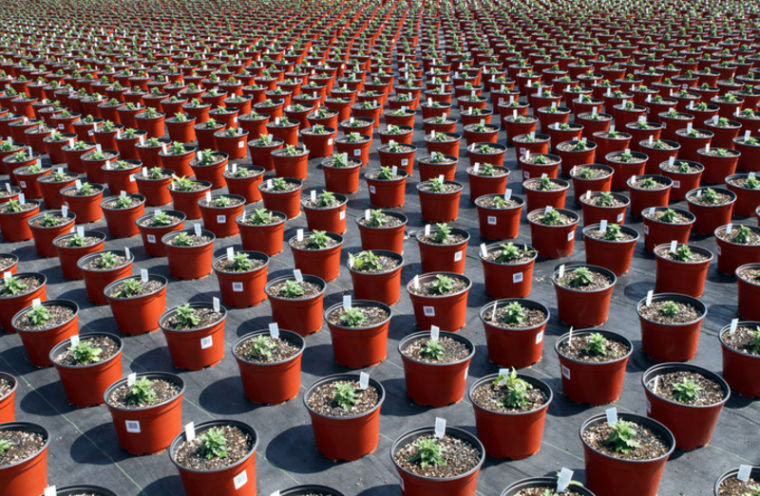 Tucked away off Blanchard Street, Dargoonian Farm is the last working farm in Andover. With its 13 greenhouses, it is known for its crop of mums in the fall, produce in the summer and poinsettias in winter. 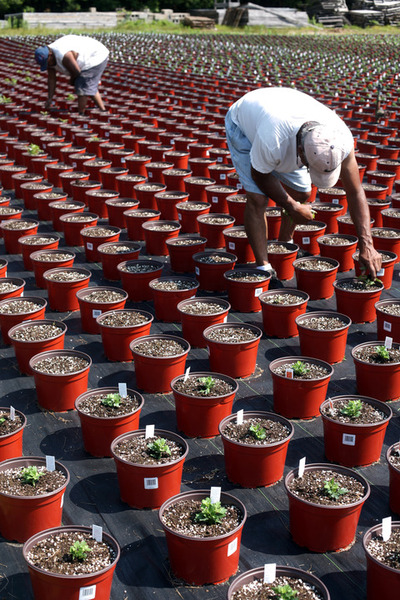 Workers at Dargoonian Farm in Andover plant mums this spring. As other farms throughout town have closed over the years, the Dargoonian family has done its best to adapt with the times. 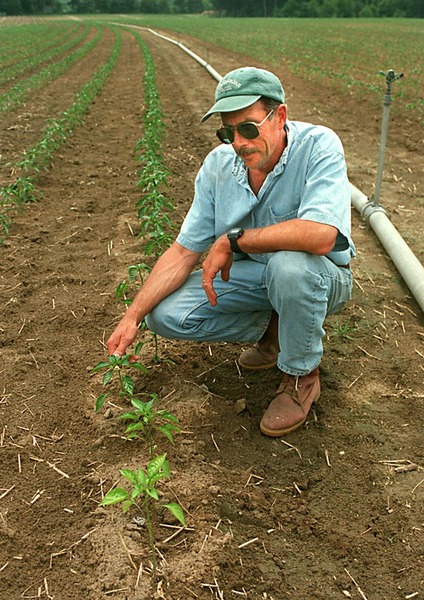 Thomas Dargoonian checks his pepper plants at his West Andover farm in 1999. He took over the family farm from his father and uncle, but he says his daughters have no interest in continuing the operation.

Workers at Dargoonian Farm, the last farm in Andover, plant about 30,000 mums this spring. In the summer, the fields are replaced with produce sold primarily to Market Basket. Come winter, the greenhouses will be filled with poinsettias.

Tucked away off Blanchard Street, Dargoonian Farm is the last working farm in Andover. With its 13 greenhouses, it is known for its crop of mums in the fall, produce in the summer and poinsettias in winter.

Workers at Dargoonian Farm in Andover plant mums this spring. As other farms throughout town have closed over the years, the Dargoonian family has done its best to adapt with the times.

Thomas Dargoonian checks his pepper plants at his West Andover farm in 1999. He took over the family farm from his father and uncle, but he says his daughters have no interest in continuing the operation.

Two farmhands speak Spanish as they shuffle down the rows of zucchini squash, scraping at the soil with hoes, pulling up weeds.

A soft breeze cools the otherwise steamy summer air. Tall trees surrounding the 15 acres of tilled farmland shift in the wind. A flock of birds erupts from the treeline, startled by something deep in the woods.

“We love it,” said Juan Rivera, 47, of Lowell, a Puerto Rican who has worked at Dargoonian Farms on Blanchard Street for 14 years. “I love working on the farm. This is my life.”

One of a dozen or so workers at Dargoonian Farms who spend the summers there, Rivera is part of a long line of Puerto Rican family members who have worked for the Dargoonians since the 1950s.

Tom Dargoonian, grandson of the original owners who now owns the farm with his wife, Dena, said that after World War II, it got harder and harder for his uncle, Red Dargoonian, and his father, Benjamin, to find American boys to work in the fields.

So they decided to use men from Puerto Rico, flying them in for the summer growing and fall harvest seasons. They stayed in a boarding house on the property.

Today, the descendants of those original farmhands still work the land, but for most of the year, they live in Lowell, Lawrence; Nashua, N.H., and other nearby communities. A handful of them still reside on the farm in the summer.

“It’s very quiet here,” Rivera, one of those summer residents, said. “Nobody bothers us.”

In broken English, Ferdinand Ortiz, 51, of Lowell, who has worked at the farm for 30 years, added, “We have a great boss.”

Evolution of a farm

On the surface, it doesn’t look like much has changed at Dargoonian Farms in the last 50 or even 100 years. Farming is still a lot of hard work. A Dargoonian still runs the operation. The farmhands still speak Spanish as they labor in the fields.

The farm turns out tons of fresh produce, including cucumbers, green peppers, eggplant, cabbage, peppers, zucchini and summer squash. Also growing are thousands of potted mums, sold in the fall. In the winter, the greenhouses are filled with poinsettias.

But looks can be deceiving.

While the 15 acres of fields, surrounded by another 30 acres of woodlands and wetlands, appear bucolic and pastoral, the truth of the matter is that much has changed with farms and farming — in Andover as well as the rest of Essex County.

As overseers of the last, true working farm in town, the Dargoonians spend a fortune on heating oil to warm the 13 greenhouses.

As the cost of oil — not to mention other, hydrocarbon-based materials such as the plastic to cover the greenhouses and tarps used in the fields to help control weeds and reduce irrigation expenses — goes up, their profits go down.

“We have two oil burners in every greenhouse,” Dena Dargoonian said recently. “We buy the whole (delivery) truck.”

The price of fertilizer and pesticides has also increased, as has the cost of water to irrigate the fields.

Meanwhile, the market is always changing. The Dargoonians sell almost all of their produce to Market Basket. Some days, the price paid for their produce is high. Other days, it’s low. The price they get truly is based on supply and demand.

Unfortunately, the growing season is pretty much the same for all farms in New England, so when the Dargoonians’ bell peppers, for example, are ready to be sold, so are everyone else’s.

“When I have peppers or zucchini growing, all the other growers do, too,” he said. “Fuel, plastics, labor, the materials that go into it, you can’t just raise your prices 30 or 40 percent. There’s a reason there are no more farms left.”

Recently, he said, a half-bushel of summer squash was selling for $22. Within a few weeks, that price could drop to $2.

Adding to that price pressure, of course, are shipments from China, Canada and other countries that may further depress the price.

There have been other changes, too.

“When I was a kid, this whole neighborhood was farms,” he said. “Every subdivision on the streets leading to this farm were all farms at one time.”

It is unlikely that the Dargoonians’ 45 acres of farmland will see that same fate.

The farm was started back in the 1930s with 6 to 8 acres of land on the opposite side of Blanchard Street from its current location, Tom Dargoonian said.

While his father went overseas to fight in the war, his uncle stayed back and tended the land. In the 1940s, after the war, they cleared some more land and the farm grew to about 20 acres. They bought another parcel of land and the farm expanded to about 35 acres. At its peak, the farm included about 50 acres, encompassing part of what is now the Raytheon property.

In the mid-1990s, the land was sold to a developer, who turned it into the Devonshire subdivision, as Dargoonian Farms transitioned to its current location across the street.

Using a state program called the Agricultural Preservation Restriction, or APR, the state helped the Dargoonians purchase the land at a reduced rate, with the promise that the land would never be used for anything other than farming.

Meanwhile, the Dargoonians are taking advantage of part of the state tax code, Chapter 61A, that allows them to get a reduced property tax rate on their farm as long as it is used for agricultural purposes.

Tom Dargoonian, 60, and, Dena, 53, aren’t quite sure what’s going to happen when they want to sell the property, as their three daughters, all in their 20s, appear to have no interest in continuing in the family tradition.

Richard Bonanno, president of the Massachusetts Farm Bureau Federation and owner of Pleasant Valley Gardens, a 50-acre farm in Methuen, said that under the APR law, the property would have to be sold to a farmer, or possibly rented or leased out to one.

“You can sell it, but it has to stay in agriculture,” Bonanno said. “He has to find somebody willing to farm it.”

Another option, he said, would be to break up the property into smaller units, so that part of it could be turned into a year-round, agricultural-based retail operation, for example, while another part could be owned by someone using it to grow produce.

“Farms are getting split up,” Bonanno said. “People want to get into agriculture, but don’t have the means to purchase a whole farm.”

Demand remains high for locally grown produce, and a lot of farms have “migrated to retail farm stands,” Bonanno added.

Dargoonian is one of the few farms left that is almost entirely wholesale.

“Not long ago, everyone was wholesale,” he said. “We all went to the Chelsea produce market. There would be hundreds of trucks waiting to get there every day. A lot of them were from Andover.”

Now, the Dargoonians deliver fresh produce within 24 hours of it being picked to the Market Basket warehouse in Andover.

For the foreseeable future, Tom Dargoonian is content to continue farming in much the same way his father and uncle did before him.

“We’re not going to get rich here,” he said. “But we are making a living.”

Plus, he still enjoys the work.

“My satisfaction comes from having a product ready to be sold,” he said. “The quality is great and the demand is good. I start with nothing in the springtime.”