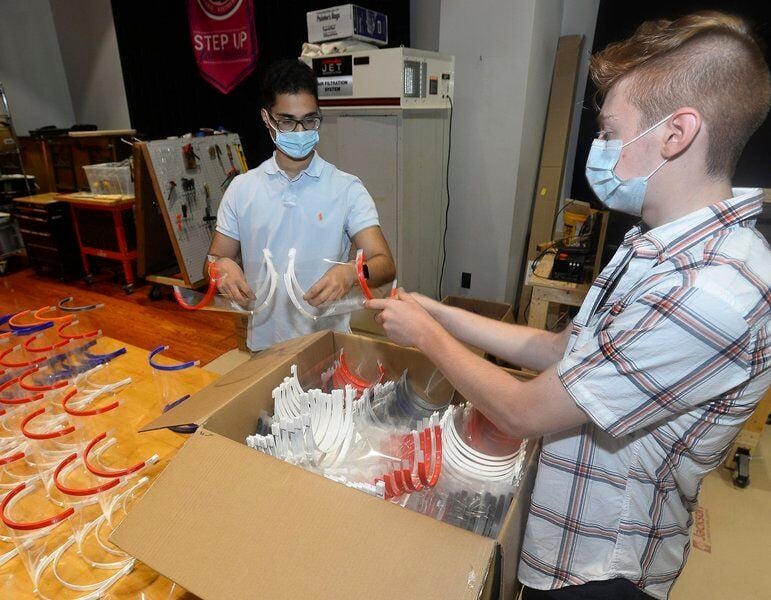 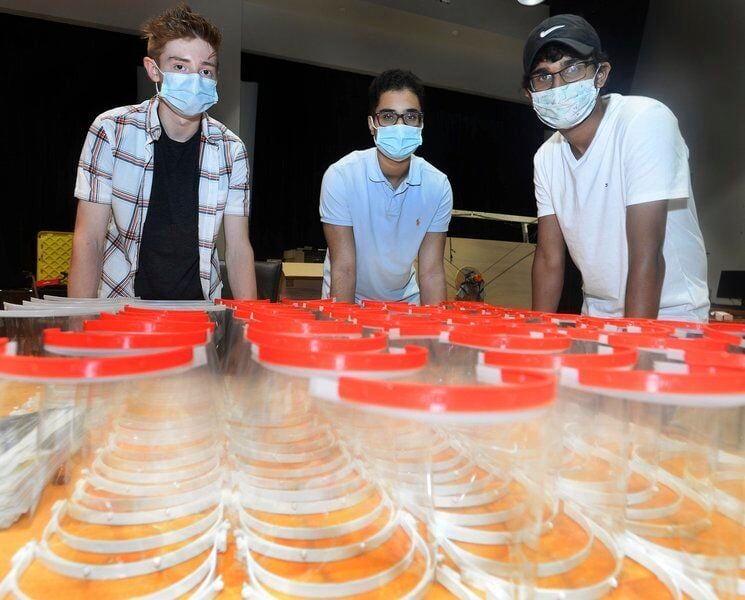 CARL RUSSO/Staff photoFrom left, Brody Junge of Boxford, Pratheek Kuimanda of Andover and Shashwat Ghevde, also of Andover, appear with the face shields they are making with 3-D printers.

CARL RUSSO/Staff photoFrom left, Brody Junge of Boxford, Pratheek Kuimanda of Andover and Shashwat Ghevde, also of Andover, appear with the face shields they are making with 3-D printers.

ANDOVER — A team of students who’ve been making 3D printed face shields for medical workers since April is now fulfilling a 2,000-unit order for a hospital in Puerto Rico.

The group, which goes by the name PPE for Healthcare Workers, is led by Pratheek Kuimanda, a rising senior at Andover High School.

Kuimanda said his teammate Inhye Kang reached out to Federico Trilla, MD, at Hospital UPR in Carolina, Puerto Rico, because it's one of the largest hospitals in Puerto Rico and the area had been hit hard by the coronavirus pandemic.

"When I was reading articles about the PPE shortage in our country, I came across an article about how the FEMA Act excluded Puerto Rico from buying PPE in other countries and that made their PPE shortage even worse," said Kang, 18, also a rising senior at Andover High School. "And I also read that they still haven't recovered from the hurricanes and earthquakes that happened a few years ago."

“They stated that they needed 2,000 units or face shields,” Kuimanda said. “At first we were, I guess, flabbergasted. At the current moment we had been producing batches of up to 250, so 2,000 was quite a shock. But we figured the demand was justified.”

Kuimanda and his team, who began working from home after schools went online, now have an office in the Cormier Youth Center. That's where they are preparing to fill the 2,000-unit order. They’ve made about 1,067 face shields so far.

He said his organization has been "donating shields at no cost to the facilities that have needed them."

“Recently we shipped out (a package) to the public health building of UNC Chapel Hill, which is pretty cool,” said Kuimanda, who added that there’s a tracking feature on his organization’s website which indicates where all the orders have been fulfilled.

As for funding, Kuimanda says his team only has $500 to work with right now to produce the order. They are selling T-shirts and collecting donations, after having received initial funding through a $500 grant from the Service Club of Andover.

“Funding has definitely slowed down since the beginning,” he said. “That’s something we are struggling with right now in terms of brainstorming different ideas ... reaching out to different social groups, we were thinking of trying to apply for some grants as well.”

If you would like to donate to the team visit ppeforhealthcare.org and click on the “donate” button on the left side of the home page.