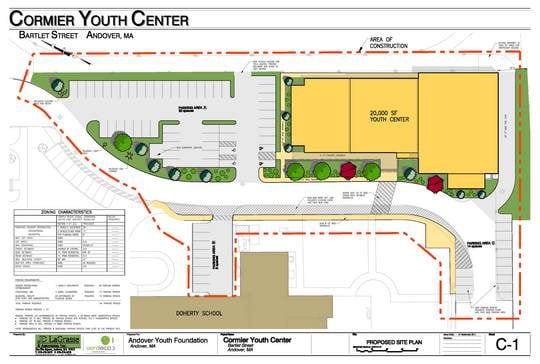 The proposed youth center will be located behind Doherty Middle School, on a parcel of land set aside by voters at 2007 Annual Town Meeting. 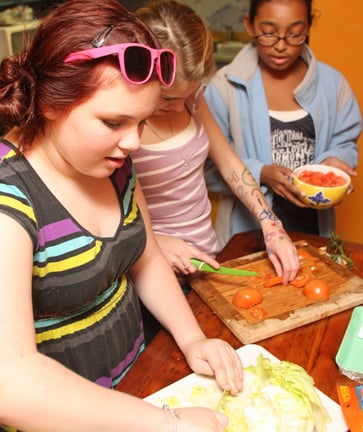 West Middle School students prepare ingredients to be put on tacos this past Monday in the second-floor kitchen of Youth Services' Pearson Street office. From left are: Sasha Kaminsky, 13; Shannon Williams, 14; and Kendra Moore, 12. 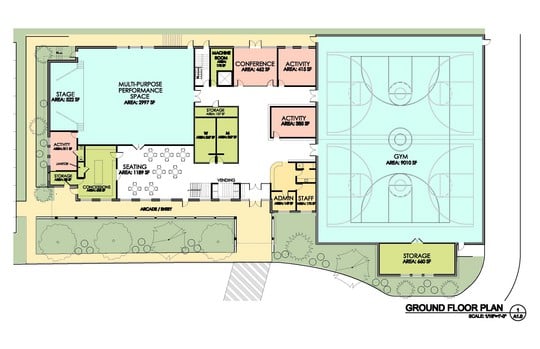 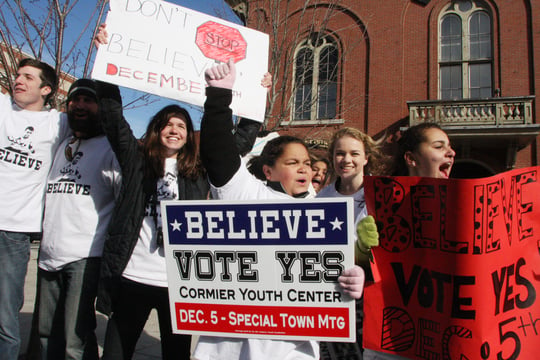 The proposed youth center will be located behind Doherty Middle School, on a parcel of land set aside by voters at 2007 Annual Town Meeting.

West Middle School students prepare ingredients to be put on tacos this past Monday in the second-floor kitchen of Youth Services' Pearson Street office. From left are: Sasha Kaminsky, 13; Shannon Williams, 14; and Kendra Moore, 12.

"Don't stop believing" and "Honk for the youth center," said signs held by Andover teenagers and Youth Services volunteers in downtown Andover over the weekend.

In less than two weeks, the town of Andover will vote whether to give Andover Youth Services a new home, and the youths who frequent AYS' current home on Pearson Street are making every effort to make sure the answer is "Yes."

"We want it more than anything, so it's just a matter of hope and determination," said Roberto Reyes, a 14-year-old high school student who participates in AYS programming. "We have hope ... because we've been doing this for the longest time ... We've been trying to get a youth center. We believe that we can."

The town will vote Monday, Dec. 5, at a Special Town Meeting on eight articles, including two dedicated to building the $4.2 million Cormier Youth Center. The center, if approved, would be built behind Doherty Middle School on a piece of property dedicated to the project by a 2007 annual Town Meeting vote.

To build the center, the Andover Youth Foundation has raised $1.8 million in private donations. At Special Town Meeting, after years of saying it would raise all the money for the project through donations, the foundation will ask the town for an additional $2 million in public support to cover the cost of building the youth center, with the promise that more private donations would come in to pay the rest of the cost after the town shows its supports for the project.

The decision facing the town, in a nutshell, is whether youth services should grow or remain as is. The cost to grow is $2 million in tax dollars, supported by either the operating budget for 20 years or a Proposition 2 1/2 debt exclusion override, which would have to be approved at the polls separately.

Some residents opposed to the youth center proposal question the wisdom of spending $2 million on the project during the current economic turmoil. Others have asked that the issue be put off until next year's annual Town Meeting, when it could be considered with in the context of Andover's other financial obligations.

But the Andover Youth Foundations says that if the proposal is rejected by the town or is not acted upon by the end of the year, the town will lose a $1.5 million private donation and possibly other donations, effectively killing any plans of building the youth center, according to the foundation.

Bill Fahey, director of Andover Youth Services, was hired almost two decades ago to create a program for youths in Andover, on the heels of a trio of teen suicides that shook the town. The goal of the group was to provide programming and activities for youths in Andover and to give them a home away from home.

"I was interviewed for the job in the winter of 1994," said Fahey. "One question I didn't ask in the interview is where I would work out of. I assumed there would be a community facility or some place where I could operate and expand programs to react to the needs of the youth of the community."

Until two years ago, AYS ran out of an office on the third floor of the Town Offices on Bartlet Street, across the hall from the Board of Selectmen's meeting room.

It was then that the town purchased property on Pearson Street, a few blocks from the Town Offices, with the thought of expanding the Town Yard on neighboring Lewis Street. Youth Services was given 2,400 square feet of space in a building on the Pearson Street property as a temporary home while plans for the Town Yard continued to evolve.

"The kids kind of jokingly refer to it as a halfway house, because we started in a 600-square-foot office," said Fahey, grinning.

Out of that home, Youth Services puts together the bulk of its programming, and even runs some of it. A kitchen upstairs permits AYS to run cooking groups and sessions. Computers provide a place to do homework and other space in the building is dedicated to music recording projects.

The rest of the programs — an array of sports leagues, groups and more — are run at various sites throughout the town, predominantly school facilities like gymnasiums and classrooms. Dances, concerts and other events that draw an audience are handled on the second floor of Old Town Hall in downtown Andover.

"What we do is we come together as a community of girls, and we talk about stereotypes and how we can overcome them," said 14-year-old Emily Souza, a member of the group. "We plan a lot of trips to help other women in the community as well."

Then there is the individualized attention that was part of the reason AYS was formed — lending an ear to troubled teenagers and youth who would be better off with something to do or somebody to talk to after school. 'Maxed out'

As time went on and programs were either created or expanded, AYS became so popular that it filled its space on Pearson Street, according to Diane Costagliola, chairwoman of the Andover Youth Foundation.

If Youth Services is to grow, it must first receive the support of Town Meeting for a new youth center.

The new center would be built to handle the programs now offered by Andover Youth Services, while also giving AYS the opportunity to consolidate its programs into one building.

"The gymnasium, that's for basketball, for recreational leagues that it's tough to program for now," said David Tanklefsky, volunteer campaign coordinator for AYS.

But the gym could also serve other purposes, he said. "You can wheel out ping-pong tables on Friday afternoon, you can start some smaller group things, you can have a dance in there. You can utilize the space for a number of different things."

There would also be classrooms and administrative office spaces in the new building, along with a full-size pantry and kitchen, multimedia space equipped with musical practice areas and a recording studio and a computer lab. These facilities would allow almost all of AYS' programs to operate out of one location, according to Andrea Zames, vice chairwoman of Andover Youth Foundation.

The youth center would chiefly operate during after-school hours, typically from 2 to 8 p.m., according to Costagliola. The building would also be open for use by other groups of residents, including seniors, who currently have services organized out of the nearby Senior Center behind the Town Offices, which could generate revenue and support operating costs for those programs.

Youth Services runs on an annual budget of just over $300,000. Of that, $263,655 pays part-time and full-time staff salaries — three full-timers, two part-timers and around 40 seasonal employees, according to Fahey. Operating expenses absorb $39,010.

Beyond that, there is a $400,000 revolving account that AYS relies on to run its programs on an IOU basis.

The revolving account is also used to hire temporary staff and more.

Fahey said the town expects Youth Services would not require more money for new staff, including a full-time janitor for the new youth center. Instead, Youth Services would generate the extra revenue from new programs. "The building gives us an opportunity to collect more revenue, because you have a lot greater chance to develop fee-based programs," said Fahey. "The building will be able to reach more kids and build bigger programs. Our plan for that is to pay for that through a combination of program fees, rentals of the facilities and increased participation."

Annual operating costs associated with AYS are expected to climb from $39,010 to around $100,000 with a new building. While most of that would be covered the way it is today — through the budget and through program revenue — the Andover Youth Foundation would contribute $30,000 a year, as required by an agreement drafted between the foundation and the town.

Should the town support the construction of the Cormier Youth Center on Dec. 5, an agreement would be signed between selectmen and Andover Youth Foundation covering the terms under which the foundation would pay for the construction, when the town would pay its $2 million share, what would happen if there are cost overruns and who would control the building.

The project is estimated to cost a total of $4.2 million, of which AYF would be responsible for $2.2 million, according to the agreement. The process would start with a $400,000 contribution from the foundation covering architect and design costs, according to the agreement. At that point, a seven-member building committee would be assembled by Town Manager Buzz Stapczynski. It would include two representatives from a list of candidates proposed by AYF. Fahey and Costagliola would also serve as liaisons to the committee, though they would be prohibited from being members of the committee under the agreement.

An architect would be selected through a town-supported request-for-proposals process, after which AYF would release the rest of the $2.2 million, as well as an additional $420,000 contribution to a contingency fund.

After the full $2.2 million from AYF is used, the town's contribution of $2 million would be spent. The contingency money would begin to be used after that. Any money left in the contingency fund would revert to the foundation after construction.

If the fund were exhausted, AYF would be expected to cover any additional costs. But because the foundation doesn't own any property that could serve as security, according to Town Counsel Tom Urbelis, any further contributions from AYF would be a matter of good faith between the town and the foundation.

To share your thoughts on the proposed Cormier Youth Center for next week's edition of the Andover Townsman, the final issue before Special Town Meeting on Dec. 5, email dluca@andovertownsman.com.