You are the owner of this article.
Edit Article Add New Article
You have permission to edit this article.
Edit
Subscriptions
News
Sports
Classifieds
Opinion
Community
Local Events
Obituaries
Shop
Public Notices
1 of 3 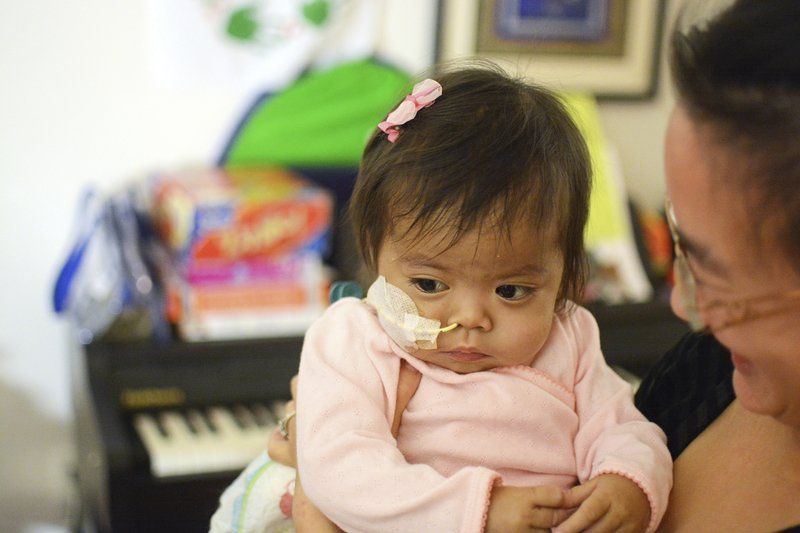 Baby Hope, Sariah Hope Morrison, is back with her family in Andover after receiving a liver transplant less than 3 weeks earlier at Boston Children’s Hospital. 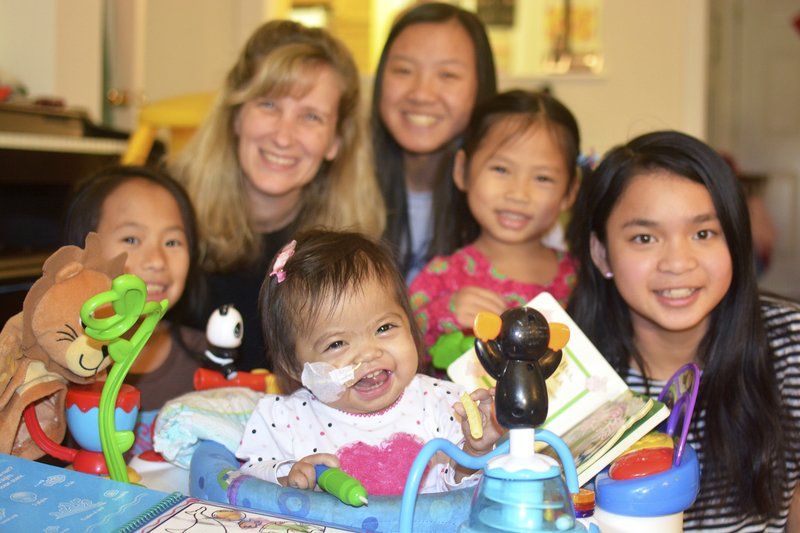 Baby Hope, Sariah Hope Morrison, is back with her family in Andover after receiving a liver transplant less than three weeks earlier at Boston Children’s Hospital. 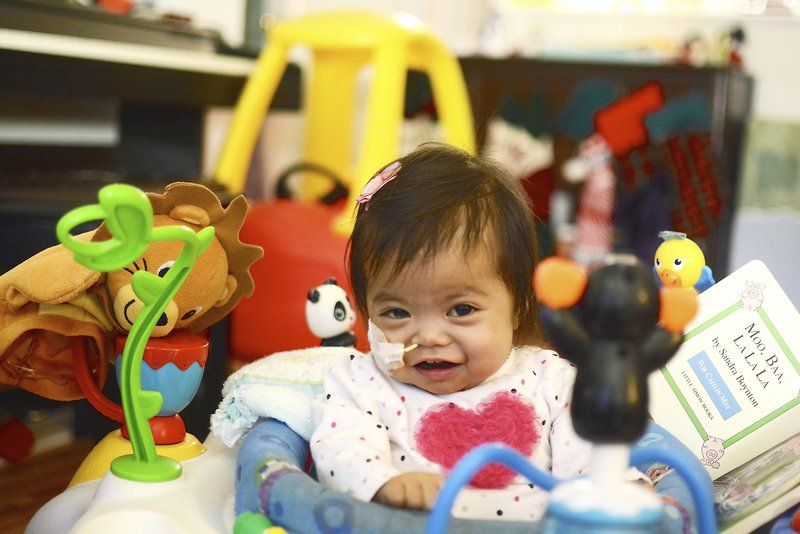 Baby Hope is all smiles as she is back from the hospital surrounded by toys and family members after receiving a liver transplant.

Baby Hope, Sariah Hope Morrison, is back with her family in Andover after receiving a liver transplant less than 3 weeks earlier at Boston Children’s Hospital.

Baby Hope, Sariah Hope Morrison, is back with her family in Andover after receiving a liver transplant less than three weeks earlier at Boston Children’s Hospital.

Baby Hope is all smiles as she is back from the hospital surrounded by toys and family members after receiving a liver transplant.

For the life of her, 20-month-old Sariah Hope Morrison is taking it all in.

She sits here in the living room of her family’s Haverhill Street condo, a nasogastric feeding tube in her nose. Her left hand grips the latest veggie stick, her right hand contemplates a puzzle piece.

A little more than a year ago, five Morrisons and two family friends first saw her, a sunken-eyed, jaundiced baby in a room with 30 other babies at a Chinese orphanage.

How the baby survived end-stage liver failure, cleared international adoption obstacles and landed in a family’s arms 8,000 miles away, falls somewhere between transcendent and the ‘M’ word.

“There is no explanation other than a miracle,” said Morrison, 45, a single mom and a pediatric occupational therapist.

Just 18 days earlier doctors’ eyes widened when they compared the hard, darkened and puffed, bile-choked liver they had removed from Hope with the pink flat donor liver they were about to place inside her.

“They were so blown away with how sick that liver was, how she was living and gaining weight with it,” Morrison said. Hope gained six pounds from June to November, going from 11 pounds to 17 pounds.

She didn’t sleep for more than an hour and a half at a time. She would wake up and eat as her body recovered from starvation engendered by her sick liver, where bile ducts didn’t work properly causing bile to build up — a condition called biliary atresia.

After a 10-hour surgery, Hope had a new liver. Her skin color went from orange green to a more healthy looking lighter tint.

Also she has started talking and eating solid foods including Cheerios and vegetable sticks.

Doctors are closely monitoring her body to make sure it accepts the liver but her prognosis is favorable. One year, post liver transplant surgery, all the babies from Children’s have survived, Morrison said.

Before the transplant. Dr. Maureen Jonas, the clinical director of Hepatology at Boston Children’s, said Hope would have a 90 percent, five-year survival rate if she was in good shape when she received a transplant.

After that, the hope only grows, right into adulthood and matrimony.

“Dr. Kim said: ‘We fully expect to be invited to the day she walks down the aisle,’” Morrison said.

Meanwhile, back in the Andover living room, Hope, nestled at a round play table, is the sun queen, the center of this universe.

A Christmas tree sits at the far end of the living room and the letters W-E-L-C-O-M-E H-O-M-E  M-O-M and H-O-P-E hang from on high at the other end.

The smell of cookies drift from the kitchen where daughter Katelyn, 14, is baking.

They all come from the same part of China, Guangxi, a green, hilly and poor state in the south bordering Vietnam and along the China Sea.

It was on a family trip, November 2014, when Morrison was volunteering at the orphanage, that the visitors’ eyes fixed on the little girl with the Chinese name Yuan Fei — meaning princess of the garden.

Chinese nannies said Yuan Fei, an orphan, was ineligible for a transplant, and besides, it was too late, her condition was too dire and she would die soon.

On the flight home the family wondered what could be done for the baby.

Maybe they could get her hospice care in the United States, secure a medical visa.

Children’s Hospital doctors told her a medical visa was highly unlikely. Morrison’s best chance was to find a family to adopt the baby, but the orphanage director said no.

Morrison’s oldest daughter, Katelyn, had an idea one day while they were riding in their car. Maybe, the orphanage would relent and allow adoption if Morrison adopted the baby.

Against odds, at each stop — securing visas,  finding an adoption agency willing to make arrangements, getting approval to fly with a very sick baby — the family got the needed approvals and paperwork.

“It was probably the fastest adoption process ever on record,” Morrison said.

The flight staff on the Asian air carrier did not want the baby on the flight, for fear she would die en route. When Morrison produced a letter saying this was a possibility but that the airline would not be held liable, the airline relented.

Mom and baby arrived home May 21. The 14-month-old weighed 11 pounds, less than half what a normal baby would weigh at that age. And a disproportionate amount of her weight came from a rock hard, enlarged liver.

From that day on the family’s focus, strengthened by friends’ support, was getting Hope healthy enough to make her eligible for a liver transplant. By July 19 she was on the liver transplant list.

The first chance for a transplant was scrapped because she had a cold. Then, Nov. 24, the call came that the hospital had a liver for Hope. It was a part of an adult liver. It had been cut in half and was going to give life to two people in need of new livers.

Hope showed spunk almost immediately, swatting at the nurses who were inserting needles and otherwise prodding her body. The nurses loved Hope’s attitude, it showed she was a fighter.

Morrison says Hope is plugged into the world and does not want to miss a thing.

Cindy Morrison has gotten Hope the care she has needed through health insurance and the online fundraising website GoFundMe.

Friends have been there at each step.

The Andover Kids Club staff made dinner for the family and delivered it to them every night over 17 days while Hope and Cindy were at Children’s Hospital.

People cleaned the condo and set up the tree. Close friends from the Chinese Bible Church of Greater Boston, Nate and Ellen Lowe, slept at the condo with the family during those 17 days, and drove the children to school.

Hope is a strong and adamant child, Morrison says, adding that she is very attentive.

The family was prepared for the New England Patriots game to be played that Sunday night and Hope was quick to make the touchdown sign.

Hope’s arms shot up and she smiled.

The family and Hope have scored a major victory in rescuing the little girl from a certain death in China.

The favorable circumstances reinforce faith in believers and even make those with doubts wonder.

“I have a friend who is an atheist and she says, ‘It makes me think maybe there is a God,’” Morrison said.