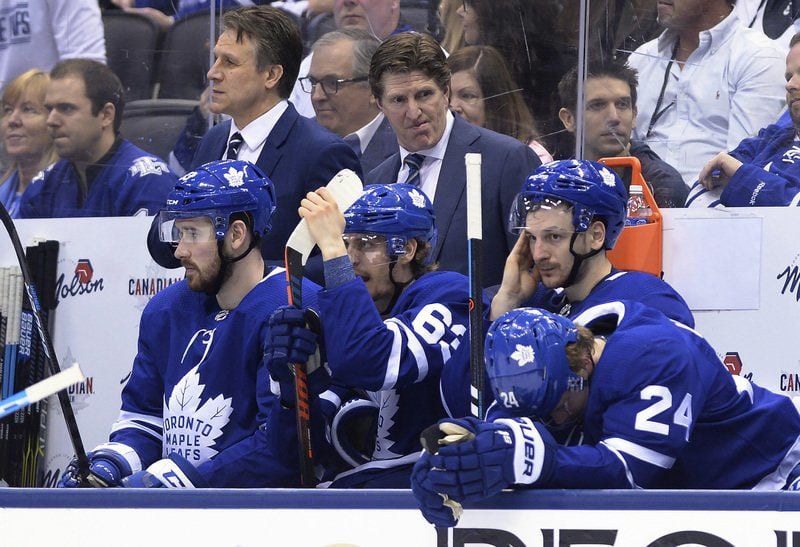 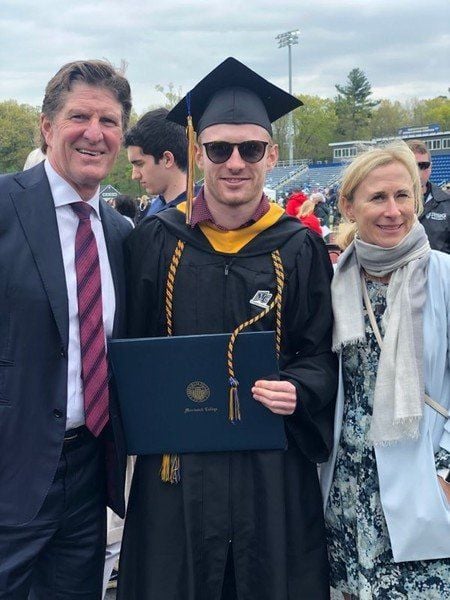 Merrimack hockey player Michael Babcock, middle, is flanked by his dad, Toronto Maple Leafs coach Mike Babcock, and his mom, Maureen, after the Merrimack College graduation on May 19. 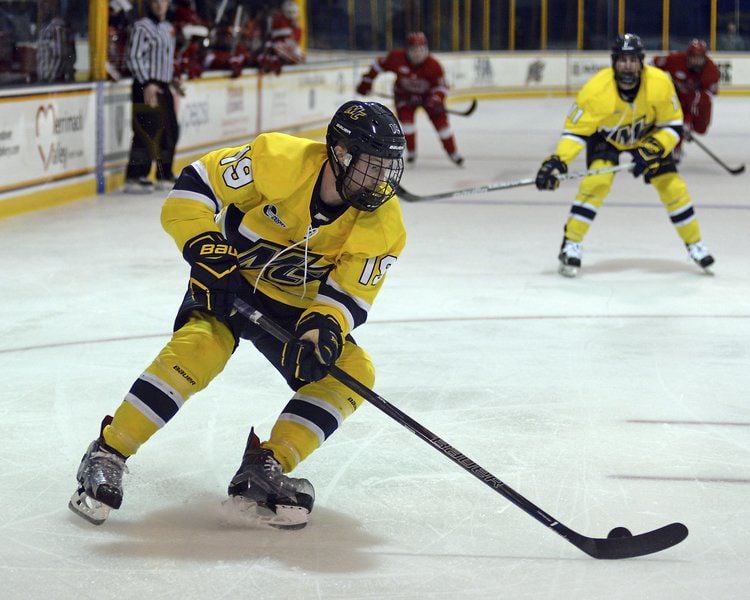 RYAN HUTTON/Staff PhotoMerrimack’s Michael Babcock snags the puck on his stick. The son of NHL coach Mike Babcock was a captain this past winter and graduated on Saturday. He will be playing professionally in France this fall.

Merrimack hockey player Michael Babcock, middle, is flanked by his dad, Toronto Maple Leafs coach Mike Babcock, and his mom, Maureen, after the Merrimack College graduation on May 19.

RYAN HUTTON/Staff PhotoMerrimack’s Michael Babcock snags the puck on his stick. The son of NHL coach Mike Babcock was a captain this past winter and graduated on Saturday. He will be playing professionally in France this fall.

Toronto Maple Leafs head coach Mike Babcock recalled getting a phone call from his son, Michael Jr., who was on a recruiting visit at Merrimack College.

“I said, ‘No you’re not! Get home!’ I had never heard of Merrimack,” recalled Coach Babcock. “There were so many other schools that he was looking at that I had heard of.”

Six years later, Coach Babcock not only knows about Merrimack, he might be considered an unpaid recruiter.

“What a place it was for Michael,” said Coach Babcock, who was at the school May 18-19 for graduation events. “Coach (Curtis) Carr was great to deal with in the recruiting process. He had two (head) coaches who really cared about him. He ended up being the captain this past season, which was special. And academically, he really pushed himself.”

Coach Babcock was seen at Merrimack games the last four year years, usually quietly taking up space in one of the suites. His son was noted for his grit, his ability to play offense and defense and the fact he could play all three forward positions.

“I went to about seven games a year. Most were at Merrimack, some on the road when my schedule allowed,” said Coach Babcock. “It was really great to see him play.”

One thing Coach Babcock didn’t do much of, because of commitments to the Maple Leafs the last four years, was take in the Merrimack campus and surrounding area.

He stayed at the Andover Inn, a quaint hotel adjacent to Phillips Academy, with his wife and they were in awe of the area.

“I can see why Mike loved it here,” said Coach Babcock. “Downtown Andover is beautiful. (Phillips Academy) was an amazing place. It was nice to relax and see the area.”

Coach Babcock has been a busy guy since his team lost to the Bruins in seven games a month ago. In early May, the family saw Mike’s sister, Taylor, graduate from the University of Michgan.

Eldest daughter, Allie, is a Dietetic Intern at Brigham and Women’s Hospital, which is through Harvard Medical School.

“It seems like we have this strong connection to Boston,” joked Coach Babcock.

As far as the Merrimack College hockey experience, including the “Hockey East” experience, Coach Babcock said his initial thoughts were all wrong.

“Mike had a great four years and now is going to get a chance to play professionally in France,” said Coach Babcock. “It goes to show you that if you work hard, continue to improve and be a role model for others, you can succeed.”

The Babcocks, who are Catholic, were also moved by the baccalaureate Mass the night before graduation.

“That’s what this is all about, not the hockey,” said Coach Babcock. “You get life experiences and you learn from them. At Merrimack, Mike learned a lot. Trust me, I know where Merrimack is and what it is about. Great place.”