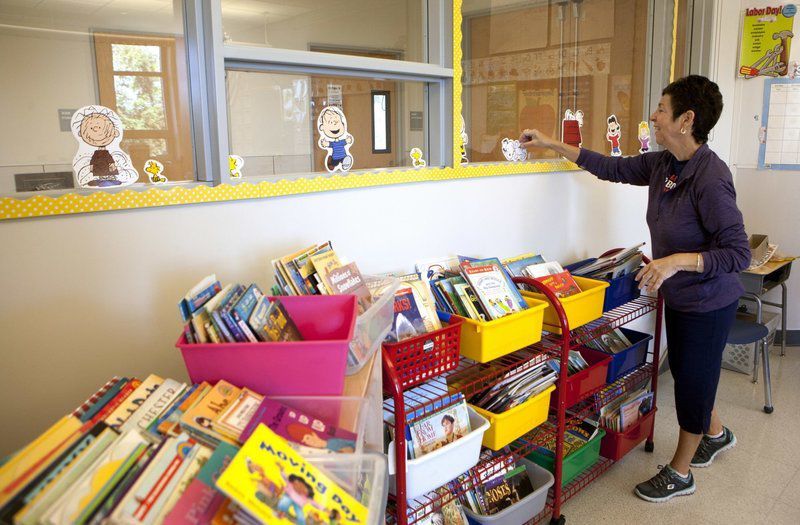 AMY SWEENEY/Staff photo. Paula Frithsen, a second grade teacher at the Bancroft Elementary School in Andover, gets her classroom ready for the first day of school. She has been teaching at the Bancroft for 19 years. Sept. 1, 2017 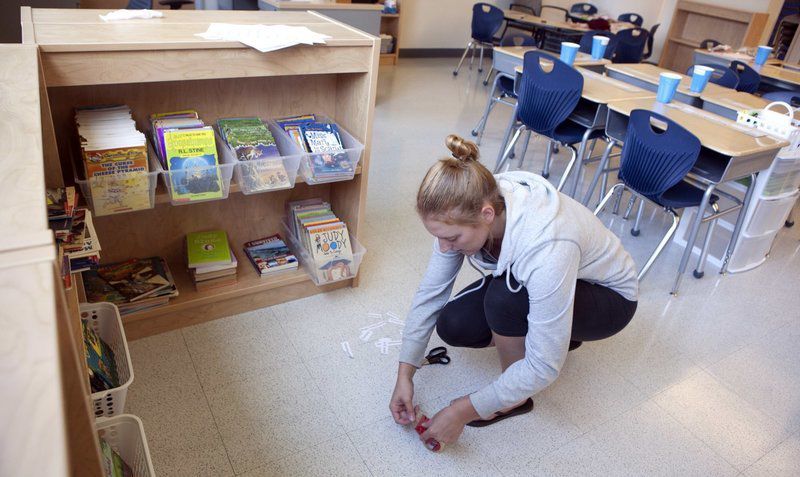 AMY SWEENEY/Staff photo. Paula Frithsen, a second grade teacher at the Bancroft Elementary School in Andover, gets her classroom ready for the first day of school. She has been teaching at the Bancroft for 19 years. Sept. 1, 2017

As the new school  year rolls in, Andover public schools are already buzzing with change. Between a program called AVID being offered to ninth grade students, ongoing renovation plans for several schools, a new high school schedule, and more, educators and the school committee have already hit the ground running.

Last Thursday night, a consultant gave the School Committee an overview of a program called AVID, which stands for Advancement Via Individual Determination.

It is a global nonprofit "dedicated to closing the achievement gap by preparing all students for college and other post-secondary opportunities," according to their website.

The district brought in Randy Bernstein, the AVID director at Eugene school district in Eugene, Oregon. Bernstein and Berman worked together when Berman was superintendent of Eugene public schools from 2011-2015. Bernstein gave AVID presentations to teachers and the School Committee.

“Of the kids in the AVID elective class, nationally 80 percent are undeserved at the college level either qualifying for free and reduced lunch or identify as a student of color," Bernstein told the committee on Aug. 31. "AVID students on average attend college 90 percent of the time, whereas kids of that demographic generally attend at 20 percent."

The core leaders behind the AVID program are Director of Guidance Aixa de Kelley and Ruth Masters, a high school social studies teacher who will be teaching it to 21 9th graders as an elective this year. High school Principal Phil Conrad was trained and assistant superintendent Nancy DuClos also attended the training.

The course will be offered to these students all four years of their high school career. The elective aims to aid students in organizational skill development as well as help students with college and financial aid applications.

AVID is also being introduced school-wide to the high school as teachers will be incorporating organizational support strategies into their classes, like close reading and Cornell note taking.

It's a program that, if successful, may be introduced in coming years to the entire Andover public school district. Administrators hope to send another teacher every year for the next three years until all four high school grades offer an AVID elective.

Including what it cost the district to send educators and administrators to Philadelphia over the summer to be trained in AVID, the cost of the program so far is about $25,000, Berman said. Membership to the program cost the school district $3,000, the AVID resource library cost $5,000 and there was also the cost of allocating an elective course to ninth-graders for AVID.

Renovations on the horizon

While there are many building projects brewing in the district, perhaps the two biggest are at Andover High and West Elementary schools.

Administrators identified West Elementary as having a serious need for renovations and have submitted a request for help from the Massachusetts State Building Authority (MSBA). The MSBA selects several schools across the state each year and helps them fund renovations for new buildings annually. In recent years, the MSBA provided this type of funding for the Bancroft school renovations. The MSBA covers 41 percent of these costs.

Town meeting votes on plans for West Elementary won't happen until May 2020 at the earliest, Berman said, due to MSBA design mandates and procedures.

The school district is also looking into renovations at Andover High, a project that would be funded by the district and by, they hope, approved funds from this spring's town meeting. An override would also be needed to pay for the renovations, expected to be in the $50 million range.

The district will choose a firm to perform a feasibility study on Sept. 28 with the intent that the study will be done some time in December or early January. The study is being funded by $200,000 in state funds from a grant for the media center.

Simultaneously, Berman said, a demographic study by Cropper GIS Consulting will be finalized in October. The study will provide projections on student populations for the next 20 years. Over-enrollment is currently a huge issue at Andover High, he said, and something the district hopes to address for decades to come.

"I do think it will be important for you to think about an enrollment decision," said Annie Gilbert, chairwoman of the Andover High School Facility Study Committee at school committee meeting on Aug. 31. "Our committee has talked a lot about which is worse — over building or under-building? The last time the high school was renovated in the 1990s we did not get it right and it's unfortunate for generations who went through. It has been tough for teachers and students."

According to Gilbert, the high school is the most used public municipal building after the public safety center.

In addition to concerns about space issues, the district hopes to update electrical systems in the school as well as boilers and sprinkler systems, which currently don't exist at the high school.

The renovations would include creation of spaces designed for innovation centers and robotics labs, and more. Gilbert stated that she hopes renovations can improve air quality control and regulate temperatures better at the school, among other improvements.

"No matter where you go to elementary or middle school in Andover, eventually you go to the high school," Berman said. "And we really want it to be a place students want to be. I want Andover to be parents' first choice."

Administrators are also looking into moving the Shawsheen pre-school over to the high school along with these other renovations.

According to Berman, the feasibility study will indicate if such a move is possible.

"We have to get out of Shawsheen," he said, noting that handicapped accessibility is difficult and the building is outdated. If it is feasible to move the pre-K program to the high school, the Shawsheen School would be turned over to the town, he said.

If the feasibility study determines the move is not possible, then Berman said he would present another option to the town for consideration.

A new schedule is being introduced to Andover High school this year. Students take seven courses, with five class periods a day, over an eight-day period. An additional block of classes, called the H blocks, will involve students meeting with an adviser, working on projects, getting extra help, and more.

Students will have five H blocks over the eight-day period, like any other class. What is unique about H block is that H1, the first H block in the cycle, is an advisory period where a teacher meets with 20 students who they will remain an adviser to for all four years of the students' college careers. This gives students consistent access to a teacher that will get to know them well, said Berman. The H2 through H5 blocks are times when students can meet with a teacher for extra help, work on projects, study together or simply sit and read a book.

Although many are optimistic about the new schedule, some parents and students are concerned about the homework load of seven, year- long classes.

School Committee Chairwoman Susan McCready said the district will be sensitive to the concerns of parents and students. She attended a meeting held last week for the parents of juniors and seniors to learn more about the new schedule and she said it was well-attended.

"There were some with concerns and others who seemed very enthusiastic," she said. "We need to understand some people are anxious about it."

Berman said it will take about two years to work out all the bugs in the new program.

"I think we are going to find out there are some nuances to the schedule," Berman said. "But I think for the most part we are all set."

All students will now have access to a program, Texthelp, to help them when working with texts online. Many of the texts students use will be online texts on their devices, and so the program provides support to a range of student needs. Dyslexic students in particular may benefit to the program's read-aloud features.

"I think we’ve made lot of progress in the area of reading particularly," Berman said. "We’ve gone to a lot of online texts and with our one-to-one initiative. Kids will access textbooks on a computer and every student will have access to a program called Texthelp, a program allowing students to have text read to them, have a word looked up, and enlarge the font."

Five Andover public schools also have adopted loud-speaker technology that allows the teacher and other students to be heard clearly, no matter where students sit in the classroom. A large speaker will be hung from the ceiling that is attached to a small microphone worn by teachers while students will share one or two pass-around microphone as well.

All students and teachers should benefit from the technology, Berman said, but in particular the 25 to 30 students in the district with hearing impairments will benefit most. No longer will they have to sit in the front of a classroom to hear better. Now they can sit anywhere and hear just as clearly, he said.

Administrators hope to bring the technology to all Andover Public schools in the coming years.

Teachers team up to innovate with students

Remember when teachers helped students create arcade games this past year out of recycled materials and held an end of the day carnival? The project taught students about basic machinery. Teachers this year will form innovation teams to bring forth similar innovation ideas and projects to students.

According to Berman, teachers simply enjoy these innovation projects with students and are happy to take time to make it happen.

Anyone wondering about the late start for the new school year? While many other districts started last week, Andover schools didn't start until today -- Sept. 7.

That's because of the teachers' union contract, which stipulates that school can't start before Sept. 1 unless voted for by the union. Berman and McCready said teachers voted against an earlier start. Teacher preparation days, held on Tuesday and Wednesday of this week, then bumped the first day to Sept. 7.