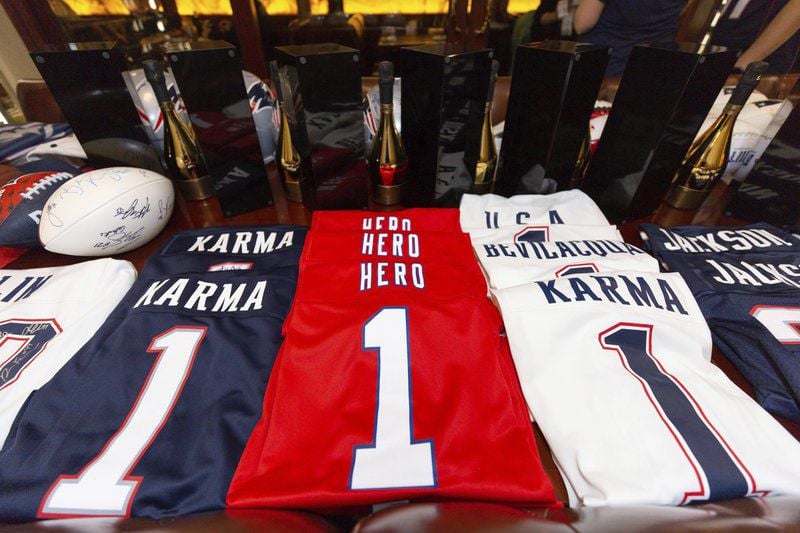 Some of the uniforms that were signed by members of the New England Patriots and sold as part of a fund-raiser for Andover Cares at Karma last week. 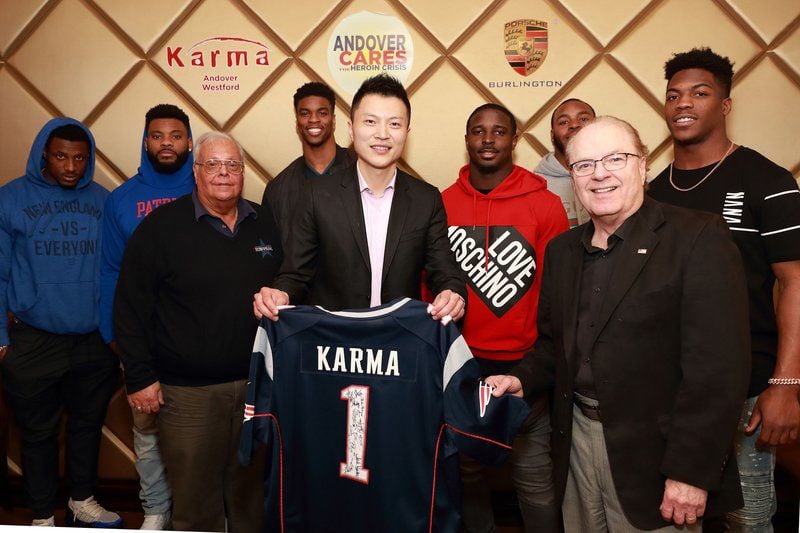 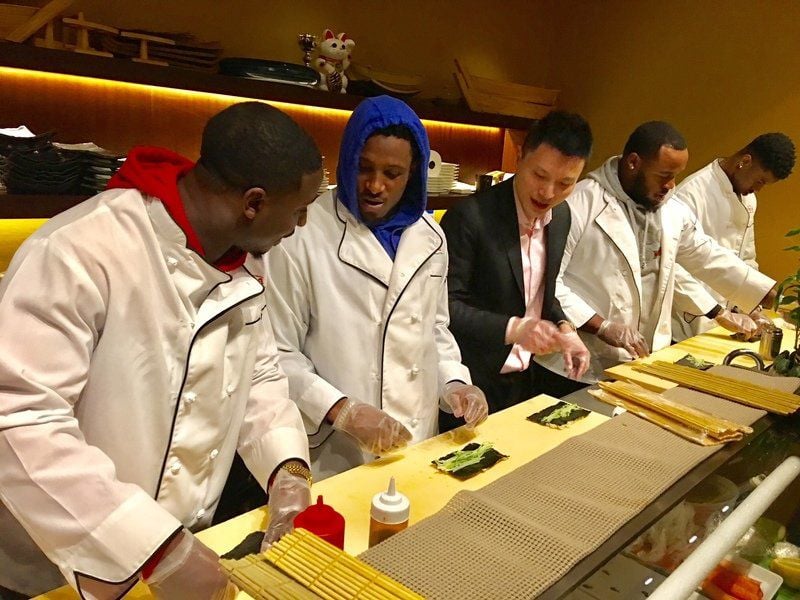 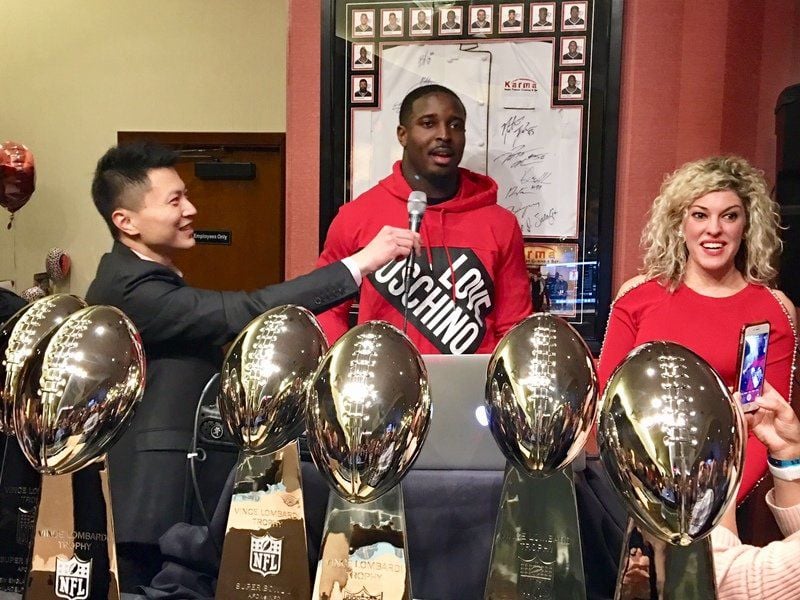 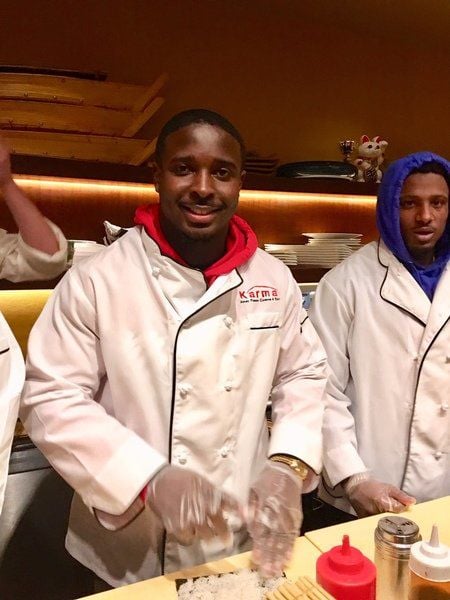 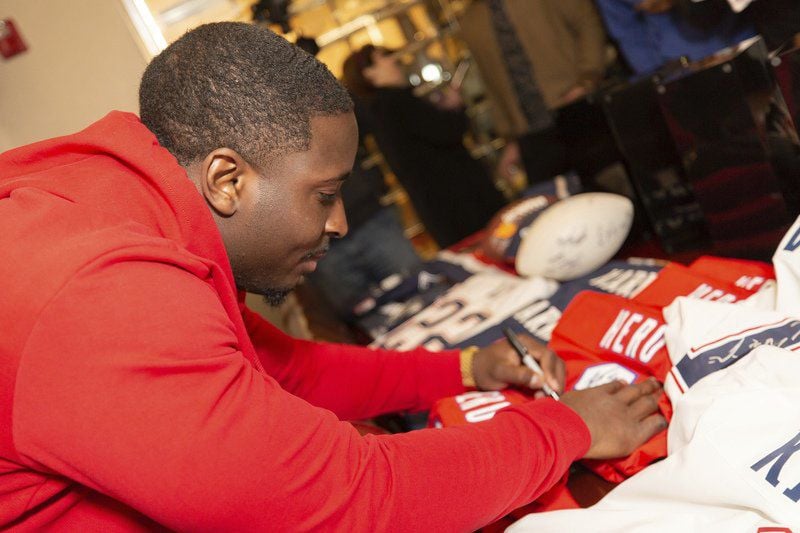 Running back Sony Michel signs jerseys that were auctioned off as part of the fundraiser. 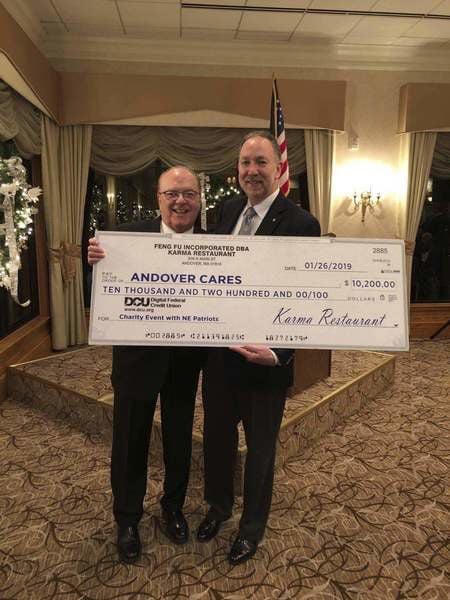 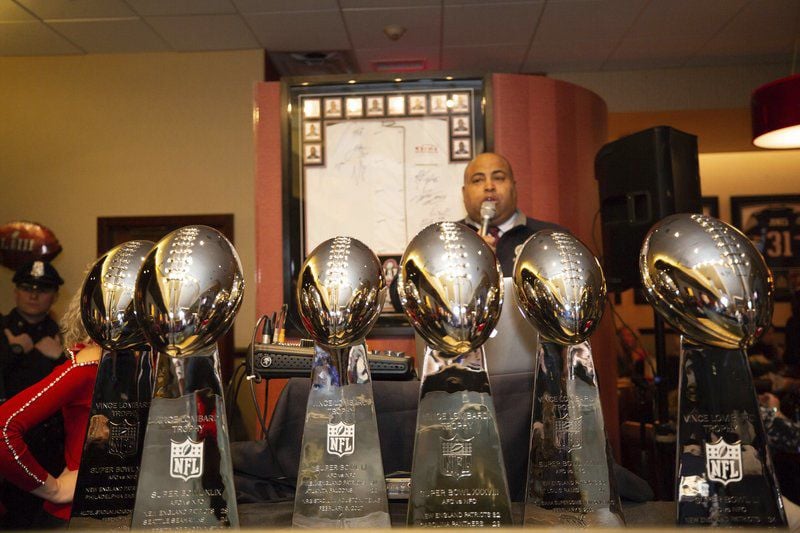 Some of the uniforms that were signed by members of the New England Patriots and sold as part of a fund-raiser for Andover Cares at Karma last week.

Running back Sony Michel signs jerseys that were auctioned off as part of the fundraiser.

A mere three days after winning their sixth Super Bowl championship and only a day after a tumultuous victory parade through the streets of Boston, six current members and one former player for the New England Patriots were the guests of honor at a celebration at the Karma restaurant Wednesday night.

The party was a three-pronged affair, said Iverson Guo, host of the party at Karma, the restaurant he owns at 209 N. Main St., in the Shawsheen Plaza.

It was to "celebrate the victory with our local fans and these athletes," he said in an email. "More importantly we invited leaders from Andover, North Andover and Lawrence and it shows our appreciation to our leaders and firefighters during the gas explosion crisis," he said. "Karma Restaurant was closed almost one month during the shutdown. This crisis affected a lot of business and residents in our community."

But the party was also a fund-raiser for Andover Cares, a spinoff of the local Rotary Club run by Selectman Paul Salafia to raise money and awareness for the fight against opioid addiction.

The event raised more than $10,000 for Andover Cares, according to Guo.

Originally, it was reported that the event was held as a fund-raiser for the victims of the gas explosions. Guo said that wasn't the case.

Guo, who has a longtime relationship with the NFL’s best team, said he spoke with Brandon King at the Patriots’ victory party in Atlanta and asked the outside linebacker if he and other teammates could appear at a fundraiser at Karma.

King, who is no stranger to the Karma, agreed to tackle the challenge. He and cornerback J.C. Jackson, offensive guard Shaq Mason, running back Sony Michel — who scored the big game’s sole touchdown on a 2-yard run — safety Obi Melifonwu and linebacker Elandon Roberts wowed the fans at the Karma Wednesday evening.

Rob Ninkovich, an outside linebacker who retired from the Patriots after the 2016 season, also attended the party.

The players said “giving back” and supporting a community that faced a serious crisis, whether it was the gas crisis or the opioid crisis, is very important to them.

“It’s important that they give back,” said Guo, whose relationship with the Patriots goes back to 2005. “They want to support the community.”

"It was a great event," said Vispoli, noting that he spent some time talking with Sony Michel and one or two other players about what it's like play for Coach Bill Belichick.

Vispoli said the players he spoke with said it was all about keeping your eye on the prize.

He also noted that the players appeared to be exhausted, with at least a couple of them planning on leaving that night for their permanent homes in places like Houston.

It isn't the first time Guo has raised money for Andover Cares. He ran a similar kind of event, inviting Patriots players, for an Andover Cares fundraiser in December 2017.

At that event, running back James White was joined by cornerback Jonathan Jones, defensive back Brandon King, outside linebacker Marquis Flowers and defensive end Eric Lee for the party, which raised thousands of dollars for Andover Cares.

In December 2015, Guo held a fundraiser for Andover Cares, inviting Dominique Easley and Rob Ninkovich, safety Nate Ebner and punter Ryan Allen to the event, along with about 100 community members. That event raised thousands of dollars as well.

Guo has been doing event with the Patriots since 2005, when he first catered for the organization.

“They loved my sushi,” he said. When he was getting ready to open his own restaurant, former Patriots center Dan Koppen and other players suggested “good karma,” he said.

As in past events, during last week's the Patriots players donned white Karma kitchen uniforms and got a lesson on how to prepare sushi from the master himself. The walls are lined with photos of Patriots and the players who have visited the restaurant over the years. That evening they signed countless footballs, jerseys and helmets.