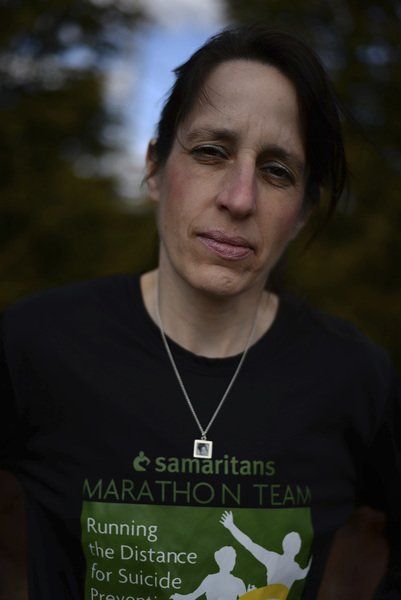 PAUL BILODEAU/Staff photoAndrea Coppola Mendes of Andover will be running the Boston Marathon in memory of her sister, Joann Coppola Trull, who committed suicide 18 months ago. 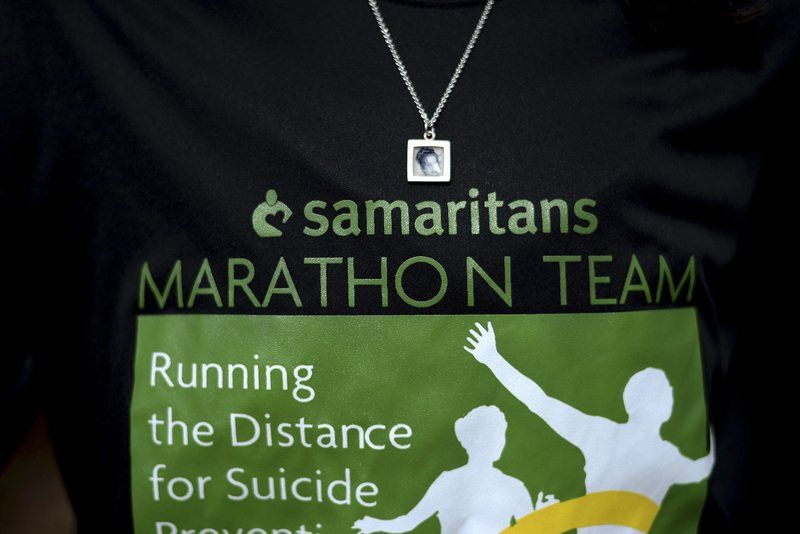 Andrea Coppola Mendes of Andover will be running the Boston Marathon in memory of her sister, Joann Coppola Trull. 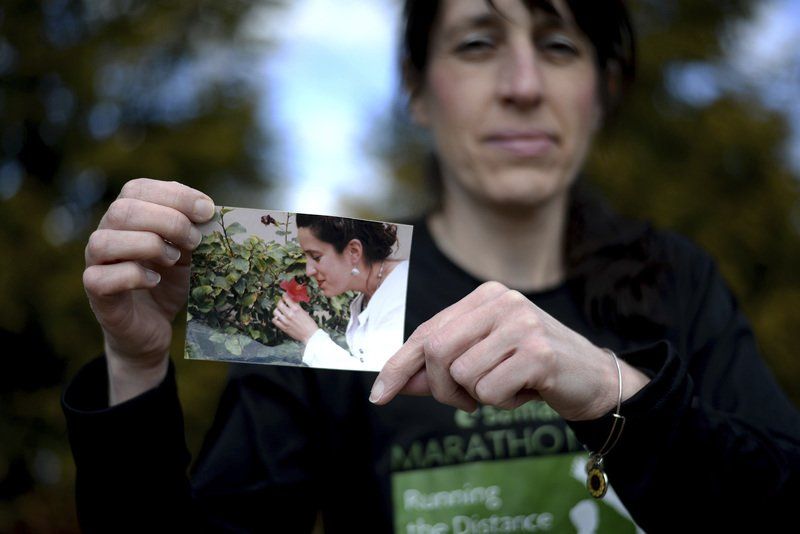 PAUL BILODEAU/Staff photosAndrea Coppola Mendes of Andover will be running the Boston Marathon in memory of her sister, Joann Coppola Trull, who committed suicide 18 months ago. Here Mendes holds a picture of her sister.

PAUL BILODEAU/Staff photoAndrea Coppola Mendes of Andover will be running the Boston Marathon in memory of her sister, Joann Coppola Trull, who committed suicide 18 months ago.

Andrea Coppola Mendes of Andover will be running the Boston Marathon in memory of her sister, Joann Coppola Trull.

PAUL BILODEAU/Staff photosAndrea Coppola Mendes of Andover will be running the Boston Marathon in memory of her sister, Joann Coppola Trull, who committed suicide 18 months ago. Here Mendes holds a picture of her sister.

They were best friends. They finished each other’s thoughts. They laughed about the same goofy things. They loved dogs. And they both got their degrees – bachelor’s, master’s and doctorates in physical therapy – at UMass Lowell.

Andrea, though, believes she got more from her fraternal twin sister than she gave.

“I could never repay her for everything she has done for me,” said Mendes. “She’s always been my inspiration. She’s the one who pushed me to get my doctorate (in physical therapy). Whenever I doubted myself, in anything, I’d talk to her and she’d always say, ‘You can do it.’ “

Well, that trusted, energetic voice isn’t around any more, and in particular, won’t be around when the 45-year-old Mendes runs the Boston Marathon on April 18.

Joann had been divorced and moved about an hour away in central N.H., working a nursing home. She was in a relationship, her sister believed, that she later learned was not healthy.

“Joann was the life of every party,” said Mendes, a Tewksbury native who lives in Andover. “She was the person who would come to a party with a big hat and pink lipstick. She’s not the kind of person you would even consider committing suicide. Never.”

“I was in a funk. In some ways, I’m still in a funk,” said Mendes. “It was really, really difficult saying the word (suicide). In fact, we couldn’t say it.”

It was the beginning of a long road to easing the agony.

In fact, Mendes was turned on to the Samaritans, a Boston-based organization that provides support for those affected by suicide as well as services like a 24/7 Crisis Services hotline, community outreach and support to help prevent it.

Mendes ran in the 5K Run/Walk for Suicide Prevention in October. It was a life-changing event.

“My dad chartered a bus for 30 people,” she said. “Some walked and some ran. It was very emotional being there, among a lot of people like us, who lost someone to suicide. I’ll never forget my mom crying, ‘We don’t belong here.’ “

A tree at the finish line, had pink ribbons, with names of suicide victims, tied to branches, flowing in the wind.

“It was a very, very emotional day,” she said. “Watching the ribbons really got to me.”

The family had a granite bench erected in front of the family’s church in Tewksbury, St. William Church, in Joann’s name.

It got Mendes thinking about taking it another step, literally. She contemplated running the Boston Marathon on behalf of Samaritans and, more importantly, her sister, applying for a number with her “story.”

Mendes has been running most of her adult life. In fact, she has run 45 marathons, including five Bostons. But her last Boston was two decades ago and she really wasn’t in marathon shape the last two years.

“In November I got my acceptance,” said Mendes. “I remember saying, ‘Oh my goodness, now I have to train.’”

That meant fundraising – the minimum is $10,000 – something Mendes has never been comfortable doing. Her younger sister, Renee Czyzewski, who is married with three children, an aunt, cousin and her parents took charge.

They have raised nearly $26,000 through yesterday.

“It was amazing how everyone was all-in to help me,” said Mendes. “This has been one of the most uplifting experiences of my life. Our goal is to help others in any way.”

But Mendes says that doesn’t always ease the pain and the tears, which seem to flow every day.

“Why? Why did Joann go over the edge?” said Mendes, welling up. “We’ll never know. But asking those questions won’t bring her back. What we are trying to do is celebrate Joann’s life.”

The irony is that Joann, while supportive of her sister’s marathons, never ran one herself. That will change, said Mendes, on Patriots Day.

“Joann always wanted to run a marathon with me,” said Mendes, again welling up in tears. “Now she will.”