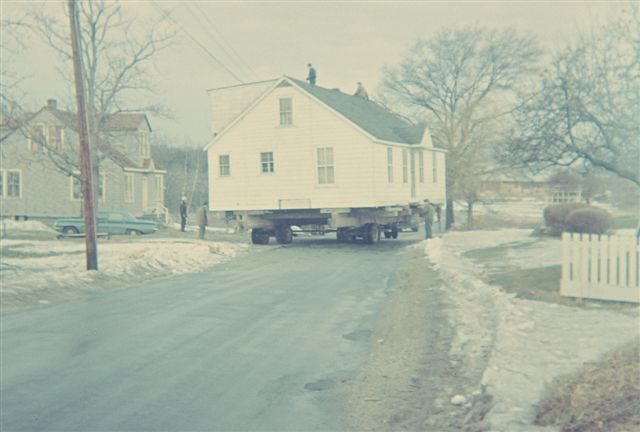 The Silva house on the move. 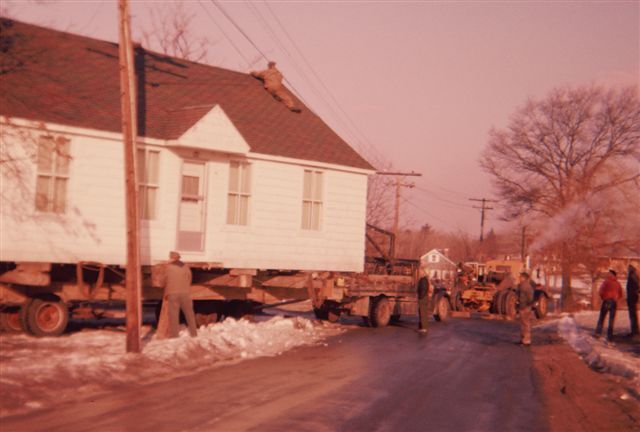 The Silva house on the move.

Note: This story by Don Robb shows how Progress sometimes has Human Costs. The property photos are those of Joan Patrakis’ parents, the Silvas.

In the early 1950s, Massachusetts was developing plans to improve traffic flow on two major highways near Andover. One proposal was to relocate Route 28 so it would run from Stoneham to New Hampshire through West Andover, and was realized when Interstate 93 was built in 1959.

Also considered was a plan to relocate Route 110. That proposal ultimately became Interstate 495, completed in 1965. Like Interstate 93, Route 495 caused significant disruption to the town and its inhabitants.

One result of the arrival of Route 495 was that the town lost taxable property, as home sites and farms were acquired by eminent domain. More significant, though, was the impact on Andover families who were displaced by the new highway.

Several West Andover farms lay in the path of the new interstate. Sometime in the late 1950’s, recalls resident Joan Patrakis, her family heard noises off in the woods at the end of the family farm on Chandler Road. Surveyors were cutting a path to lay out a new highway that the family had never even heard of!

The farm where Patrakis lived had been bought in the early 1900s by her grandfather, but in 1961, the family, like many in the area, received notice that their land was being acquired for the highway. The next year, they left the farm that had been in the family for three generations. Her uncle, who had taken over the farm, managed to buy other property further along Chandler Road, and her parents were able to move their home to another location on the same road. Still, for the family, it was an upsetting experience.

Some of her other neighbors were not so fortunate, because the price paid for the taking was not usually enough to purchase comparable property. Patrakis remembers that several neighbors, including her aunt, ended up renting homes in Lawrence.

One proposal which the town rejected, was a plan to have High Plain Road dead-end at the new highway. (Some residents argued that it wouldn’t be such a bad idea, as it would slow the growth in that part of town.) Nevertheless, a bridge over the highway was constructed there. Another proposal, to locate an interchange at Beacon Street was discarded.

West Andover in the 1950s was a sparsely settled farming area, but the new highway also affected more densely populated sections of the town, since it went right through Shawsheen Heights, northwest of Shawsheen Village. In the Heights, two streets (Loretta and Emilie Roads) entirely disappeared, and several others, including Highland and Woodland Streets, were reduced in length. All the residents of these streets were forced to relocate.

Across Main Street, Fletcher Street was eliminated, as were houses at the end of Binney Street. Here again, residents found themselves forced to resettle. In all, some 50 homes were removed in the area.

Louise Roberge and her children lived in one of the houses that were taken. “We had a nice neighborhood on Binney Street,” she recalled in a 1996 interview. Because the payment she received was insufficient, she had to move to Lawrence. Her children had to withdraw from Andover schools, and couldn’t even have an Andover library card. “I prayed a lot, and after the children were in bed, I would draw the blinds and cry,” she remembered.

Though the federal government paid 90% of the cost of Route 495 (the other 10% came from the state), the human costs of this progress were paid by the Andover families whose lives were uprooted by the coming of the highway.