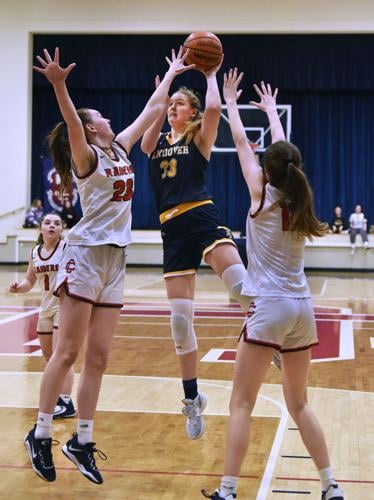 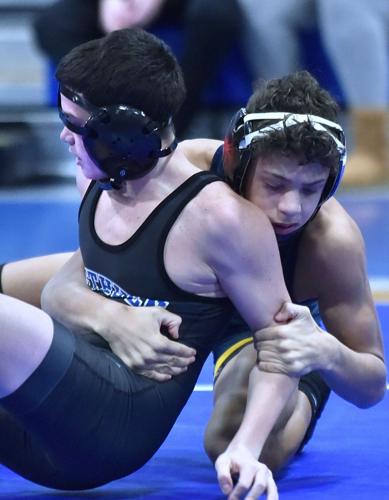 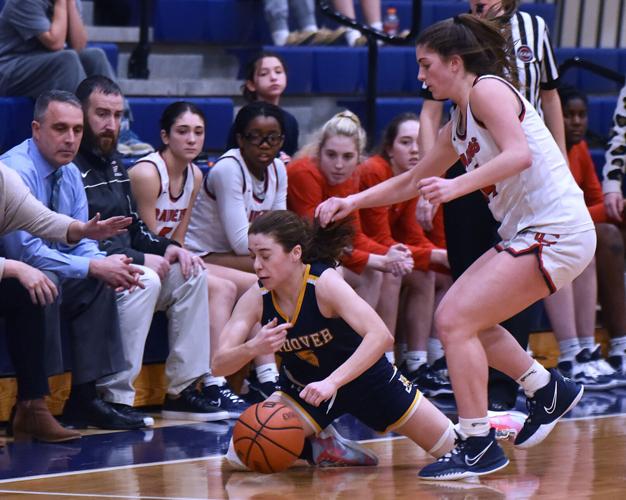 Andover’s Michaela Buckley dives for the ball while attempting to steal the ball from Central’s Kerri Finneran on Friday. 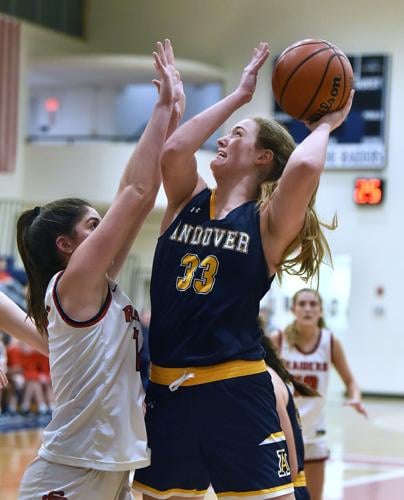 Andover’s Michaela Buckley dives for the ball while attempting to steal the ball from Central’s Kerri Finneran on Friday.

Unbeaten Andover girls hoops has dominated all opponents thus far this season. The Warriors had a tough Central Catholic team in their way on Friday night, but senior Anna Foley knew Andover had what it would take against their archrivals.

Foley scored 19 and led the Warriors to a 55-43 win on the Raiders’ home floor. The reigning MVC Player of the Year has lived up to her star status during the early stretch of the season, and Andover head coach Alan Hibino expects nothing less from her.

“She is a stabilizing force on the court,” said Hibino. “When she went to the bench in foul trouble, she’s supportive and pointed things out. As a four-year starter, she really knows how to play the game, even with fouls.”

The Warriors started off the game on a 9-0 run, sparked by Kathleen Yates, who finished the game with 12 points.

After a Central rally, Andover did what they do best, and did not let the pressure get to them, as they led by 13 heading into the fourth quarter.

“It’s always a tough place to play here, as you can tell,” said Hibino. “Central played hard, they played tough, and I thought they made some good adjustments in the game. It took us a while to move our pieces around when they switched to the zone, and I thought they did a good job overall.”

A 6-0 run by Central to start the fourth, Yates and Foley stayed composed, and ended up scoring 6 of the next 7 points to give the Warriors a 12-point lead with 4:30 to go in the contest.

“The intensity that we had when we hit some adversity is a huge message for our players,” said Hibino. “When Central threw a punch at us, how did we respond? I think we responded pretty well tonight, and had some great contributions off the bench.”

Andover is now 9-0 with a matchup versus Billerica coming next.

The fastest pin of the night was turned in by Andover’s Gavin Oliveira, who pinned Methuen’s Anthony Campagnone at 160 in just 36 seconds.

While disappointed in his team’s loss, Andover coach Mike Bolduc was pleased with the efforts of several of his wrestlers, particularly those who rallied back after falling behind early.

“We had a couple of matches where we told kids ‘Just weather the storm, bail it out,’” said Bolduc. “(Lucas Oliveira) at 170 was on his back, wrestling off his back but he came back and won.”

Oliveira fell behind Methuen’s Shane Eason 5-0 in the first period, after Eason countered his attempt at a double-leg and turned it into a takedown his own and then a near-fall.

Oliveira scored a takedown early in the second period and immediately looked to turn Eason onto his back. Eason fought the effort for more than 30 seconds when Oliveira suddenly shifted his weight to get Eason on his back and score the pin.

Oliveira’s win pulled the Warriors to within 36-30, with two matches remaining.

Chase Lembo scored a team-high 15 points, but Andover dropped a heartbreaker to Charlestown 56-54 on Saturday. Rohit Srinivasan added 14 points and Danny Resendiz had 10 points for the Warriors.

Gabby Bresnick continued to star, winning the bars (8.9) and floor exercise (9.6) as Andover defeated Billerica 132-121 last Wednesday. Ella Waszkelewicz added a third in the all-around 30.25 while Amanda Kim was second in the beam (9.0) and Sophia Hutchins was second in the vault (8.6).

Molly Kiley picked up where she left off in cross country, winning the mile in 5:08.53 to lead the Golden Warriors in a MVC meet on Wednesday. JJ Conteh (55-meter dash, 7.62) and Ashley Sheldon (55 hurdles, 9.06) each earned second-place finishes for the Golden Warriors.

Neil Chowdhury won the 300 in 36.67 and Jack Gruenberg took first in the shot put with a throw of 46-0.5 to pace Andover at an MVC meet last Wednesday.

Nik Previte and Caleb Wooster each scored a goal, but Andover lost to Billerica 3-2 on Saturday. Jack Vallarelli and Chris Jaillet each had an assist and Charlie Rainville made 27 saves for the Golden Warriors.