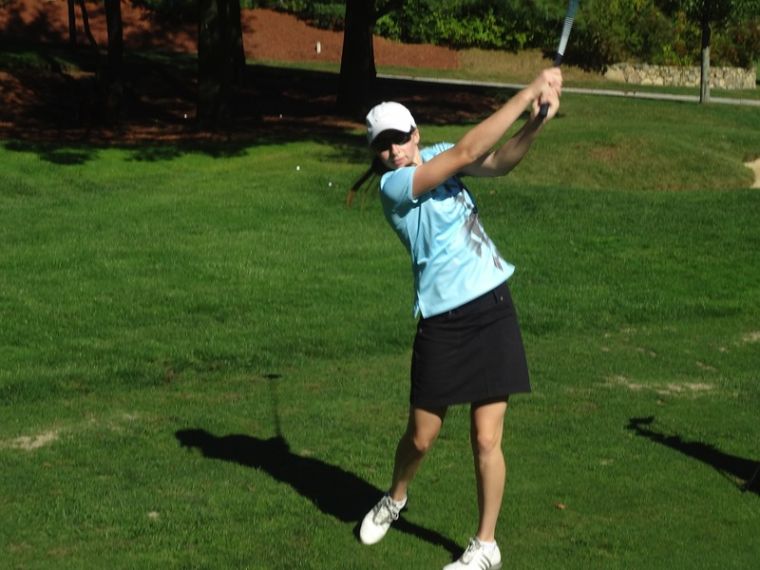 Colleen Caveney follows through on a shot for Andover High. The lone girl on the Golden Warriors varsity golf team, Caveney is undefeated at 5-0-1 individually. 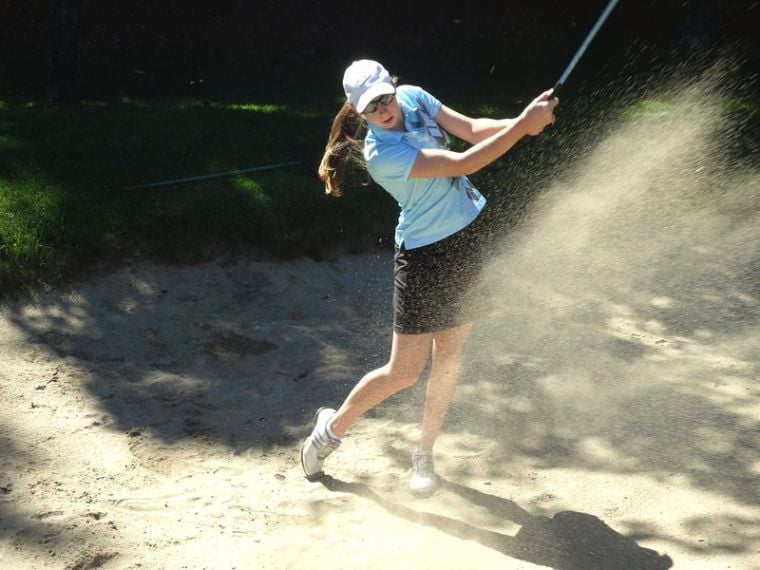 Colleen Caveney takes a shot out of the bunker for Andover High. She has been a standout for the Golden Warriors this season.

Colleen Caveney follows through on a shot for Andover High. The lone girl on the Golden Warriors varsity golf team, Caveney is undefeated at 5-0-1 individually.

Colleen Caveney takes a shot out of the bunker for Andover High. She has been a standout for the Golden Warriors this season.

Facing off against the guys on the golf course has never intimidated Colleen Caveney.

Growing up with four big brothers, all avid golfers, Caveney learned the game competing against her siblings.

So what is there to fear against a Merrimack Valley Conference foe, even if he is a male?

“It doesn’t bother me at all,” said Caveney, a junior at Andover High. “It doesn’t worry me. And beating them, I admit, is pretty fun.”

The long girl on the Andover High varsity golf team, Caveney is off to a red-hot start, compiling a 5-0-1 individual record for the Golden Warriors this season, all against male opponents.

“Colleen is doing a great job for us this season,” first-year Warriors coach David Fazio said. “She has really stepped up and played really well.”

Golf was a part of Caveney’s life from the time she could walk.

Father Keith and mother Jane shared their love of the game with their five children, including youngest son Danny — the Andover golf captain a season ago — and now daughter Colleen.

“My whole family has always played golf,” Colleen Caveney said. “But when I was younger, I mostly just liked going out and playing with my family. I didn’t really take it seriously until a few years ago.”

Caveney’s breakthrough came at age 12, when she took home her first trophy.

“I won the Lowell Junior Girls City championship,” she said. “I actually won it two more times after that. I still have the trophies next to my desk. That was when I started to think more about taking golf seriously. I got my own membership to Andover Country Club and started to really enjoy it.”

As a freshman, Caveney played for the JV team at Andover, then did not go out for the school team as a sophomore.

“I was really only average as a freshman,” she said. “And I wanted to focus more on basketball my sophomore year. I didn’t feel like I could dedicate the time to golf.”

Colleen averaged 5.1 points a game as a guard for the Warriors, which finished 18-7 and advanced to the Division 1 North semifinals.

It was then that her basketball connections helped lead her back to play for the Andover golf team.

“I have known coach Faz for years,” Caveney said. “I always went to his basketball camp (Hooptown) growing up and I coached at it this year. He was also my gym teacher, and I knew his daughter (former standout guard and current UConn lacrosse player) Ally through basketball. I was excited to have Faz coach, and I talked to (assistant basketball coach Carol) Martini, too, and she encouraged me to go for the team.”

Prior to team tryouts, Caveney fired the round of her life, shooting a 40 over nine holes at Renaissance Golf Club in Haverhill.

“That was probably the best I have ever played,” she said. “Maybe I shot a 41 before at Andover (Country Club). But I still wasn’t totally sure I was going to make the team. But coach Faz’s encouragement gave me confidence.”

Caveney not only made the varsity team, she quickly began contributing to the team from the No. 8 spot in the lineup. She opened her season with a victory over Methuen, and has kept it up to the 5-0-1 mark, including victories in each of their last two matches.

“I didn’t even know if I would be playing much this year,” she said. “It’s been a lot of fun. I use a lot of the lessons I learned from my father, who still plays a lot. Things like course management and how to hit in certain situations.

“I don’t know if it is like basketball, but it helps to be an athlete. Look at (Andover basketball legend and current Boston College sharpshooter) Nicole Boudreau. She could go out and shoot a great round of golf without even practicing because she is a great athlete. And the guys on the team are terrific to play with.”

With seven matches left on the schedule and basketball season lingering after, Caveney hopes to finish the fall up in style.

“I want to step up,” she said. “We have three meets this week, so I would like a few big days and help the team win.

“I also want to break 40 by the end of the season. That would be awesome.”