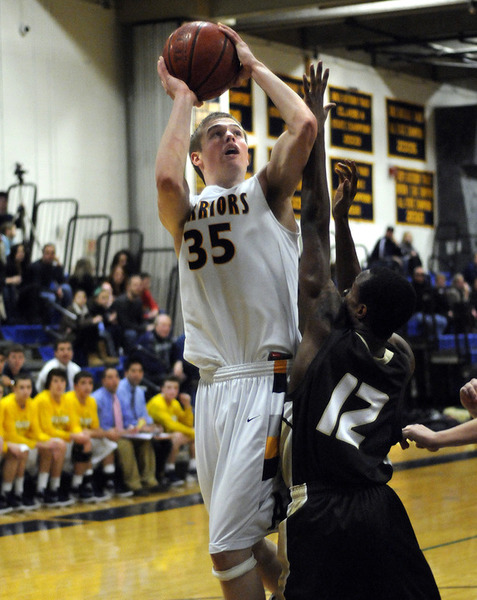 CARL RUSSO/Staff photo. Sam Dowden elevates for a jumper at Andover High. The four-year varsity starter has been the backbone of the upset Golden Warriors. 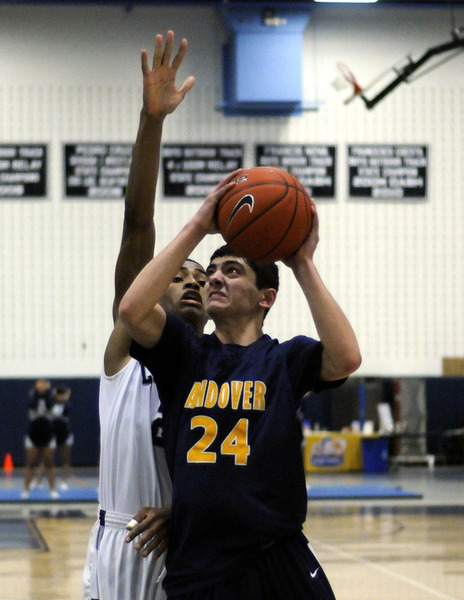 LEFT: Chris Dunn drives to the basket against Lawrence earlier this season. The senior has been a big reason why Andover is off to a hot start, heading into a matchup with archrival Central Catholic. RIGHT: Sam Dowden elevates for a jumper at Andover High. The four-year varsity starter has been the backbone of the upset Golden Warriors.

CARL RUSSO/Staff photo. Sam Dowden elevates for a jumper at Andover High. The four-year varsity starter has been the backbone of the upset Golden Warriors.

LEFT: Chris Dunn drives to the basket against Lawrence earlier this season. The senior has been a big reason why Andover is off to a hot start, heading into a matchup with archrival Central Catholic. RIGHT: Sam Dowden elevates for a jumper at Andover High. The four-year varsity starter has been the backbone of the upset Golden Warriors.

The Andover boys basketball team has heard just about every cliche in the rather extensive book of sports sayings since Dec. 27, the day the Warriors dropped a 65-63 thriller to archrival Central Catholic in the Greater Lawrence Christmas Tournament.

They were told it was a “moral victory” and a “good loss,” being able to hang with the Raiders, the No. 1-ranked team in the state, and even having a chance to the final buzzer to take the victory.

Andover senior leaders Chris Dunn and Sam Dowden, however, weren’t about to take a bow for a game that went into the record books as a loss.

“We don’t look at it that way,” said Dowden. “We don’t believe in moral victories. For us, it was just frustrating. We felt like we won all but one quarter, and looking back at the film we made too many mistakes. We have worked very hard to fix those problems and can’t wait to take them on again.”

On Saturday, Dowden, Dunn and the red-hot Golden Warriors will have another shot at their nemesis, when Andover travels to Central Catholic to take on the top-ranked Raiders.

“We expect to win every time we go out there,” said Dunn. “We know we made mistakes and had the chance to beat them last time, and this is a huge game.”

Behind the leadership of Dowden and Dunn — who have combined to average 29.5 points a game this season — and the rest of the senior class, the Golden Warriors head to Hampshire Street as one of the hottest teams in the state, and one of the biggest surprises.

A squad overlooked heading into the year has currently risen to No. 7 in the overall state rankings and No. 4 in Eastern Mass. standing at 9-2 following their second victory over rival North Andover.

“This senior group is tremendous,” said Golden Warriors coach David Fazio. “They have done a great job leading this group.”

For the last four years, the name Sam Dowden has been synonymous with Andover High basketball.

The forward/center broke into the Golden Warriors’ starting lineup as a freshman, and hasn’t looked back on his way to a tremendous four-year career.

“Sam is just amazing,” said Dunn. “He is the hardest worker I have ever been around, in basketball and school work. He has had four great years, and for the last two he has really led us and driven us to be better.”

An All-MVC selection as a sophomore, Dowden hit new heights last season when he averaged 14.5 points and seven rebounds a game.

The 6-foot-4 forward/center has been even better this winter. He is averaging 15.5 points a game, including 26 in the Christmas Tourney win over North Andover and 20 in a victory over Brockton. That all while serving as a stellar low-post defender and rebounder

“He is the heart and soul of our program,” said Fazio last season. “He is one of the most dedicated players I have had in my 23 years.”

Dowden said the challenges he faced early on, like defending former Central 7-footer and top Division 1 recruit Carson Desrosiers, only made him tougher.

“Playing Carson was a great experience and made me improve,” said Dowden. “I feel like I’ve grown a lot as a player. Obviously I’m bigger and stronger, but I also feel like I am much more versatile. I have a better all-around game.”

If anyone in the MVC didn’t know Chris Dunn’s name heading into last week, they certainly did after last Tuesday’s win over Tewksbury.

Scoring 32 points, including five 3-pointers, is bound to bring some attention.

“Chris has stepped up and been great,” said Dowden. “He has improved so much this season. He worked so hard and he’s made himself into a great player, shooter and scorer.”

Not that Dunn was too shabby a season ago. Stepping into a prominent role, in 2011-12, Dunn averaged 9.2 points a game last season, including 44 3-pointers.

But in the offseason, the 6-foot guard set his eyes on expanding his game.

This season, Dunn has averaged 14.0 points per game, including 32 3-pointers. His two biggest games were his last, the 32-point day against Tewksbury and 19-point performance against North Andover.

“I know that I am a shooter first,” said Dunn. “But I felt like, as a senior, it’s my time to step up and play an all-around game. Especially when I was named a captain, I knew it was my time.”

While Dowden and Dunn have taken many of the headlines, the Golden Warriors have gotten plenty from a senior core that include Tyler Verrette, Evan Singleton, Max Silveira, Greg Dreyfus and Jack Konevich.

“This is an amazing group,” said Dowden. “We just want to win. We work so hard every day in practice together and want what’s best for the team.

“Now, if we can beat Central, that would be a huge boost. I don’t know what the last time Andover won at Central Catholic was.”