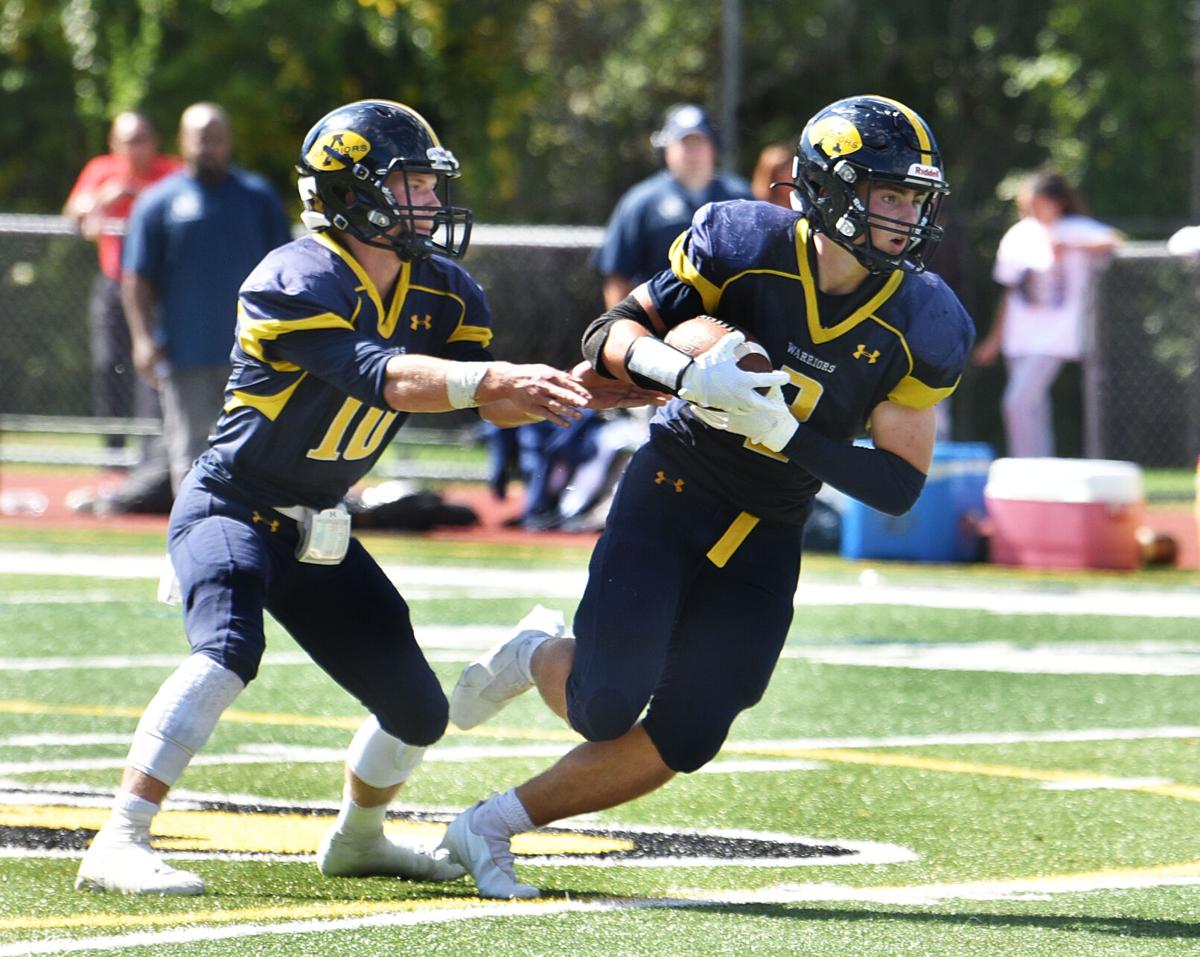 Andover running back Lincoln Beal (carrying the ball) and QB Scotty Brown (handing off) both had huge fall seasons on the gridiron. 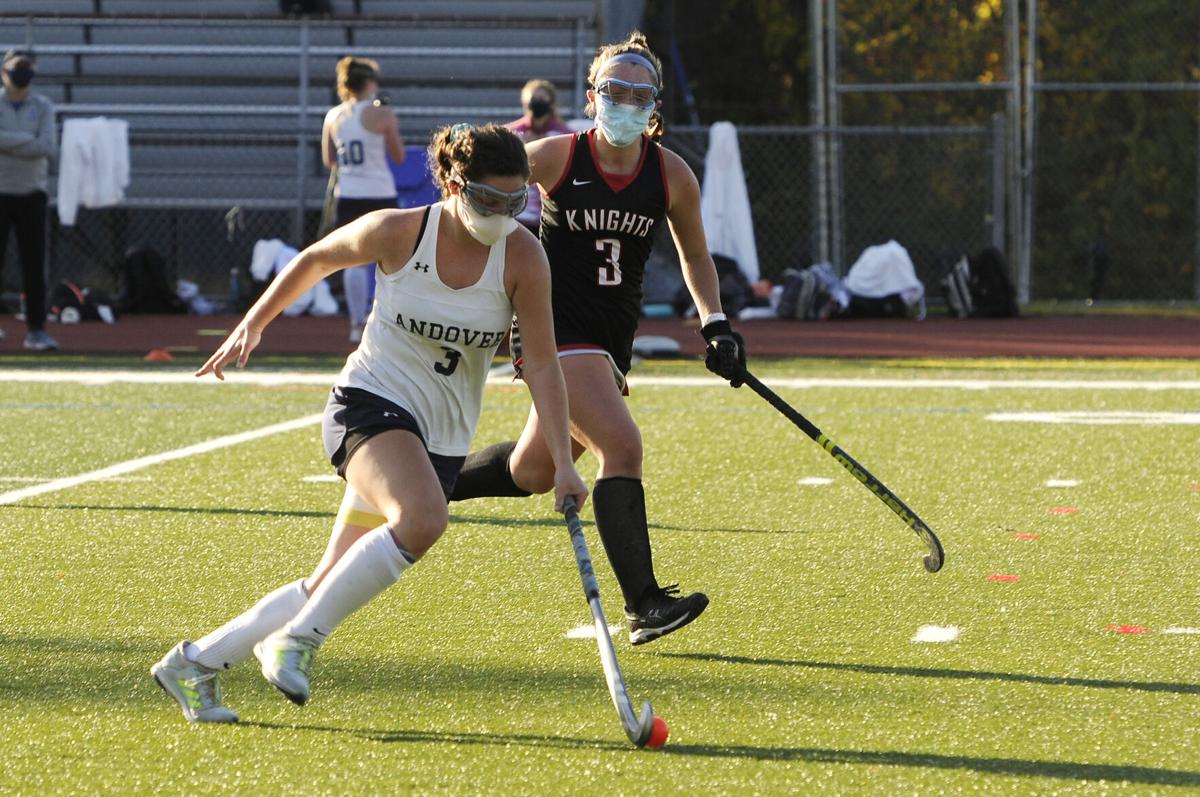 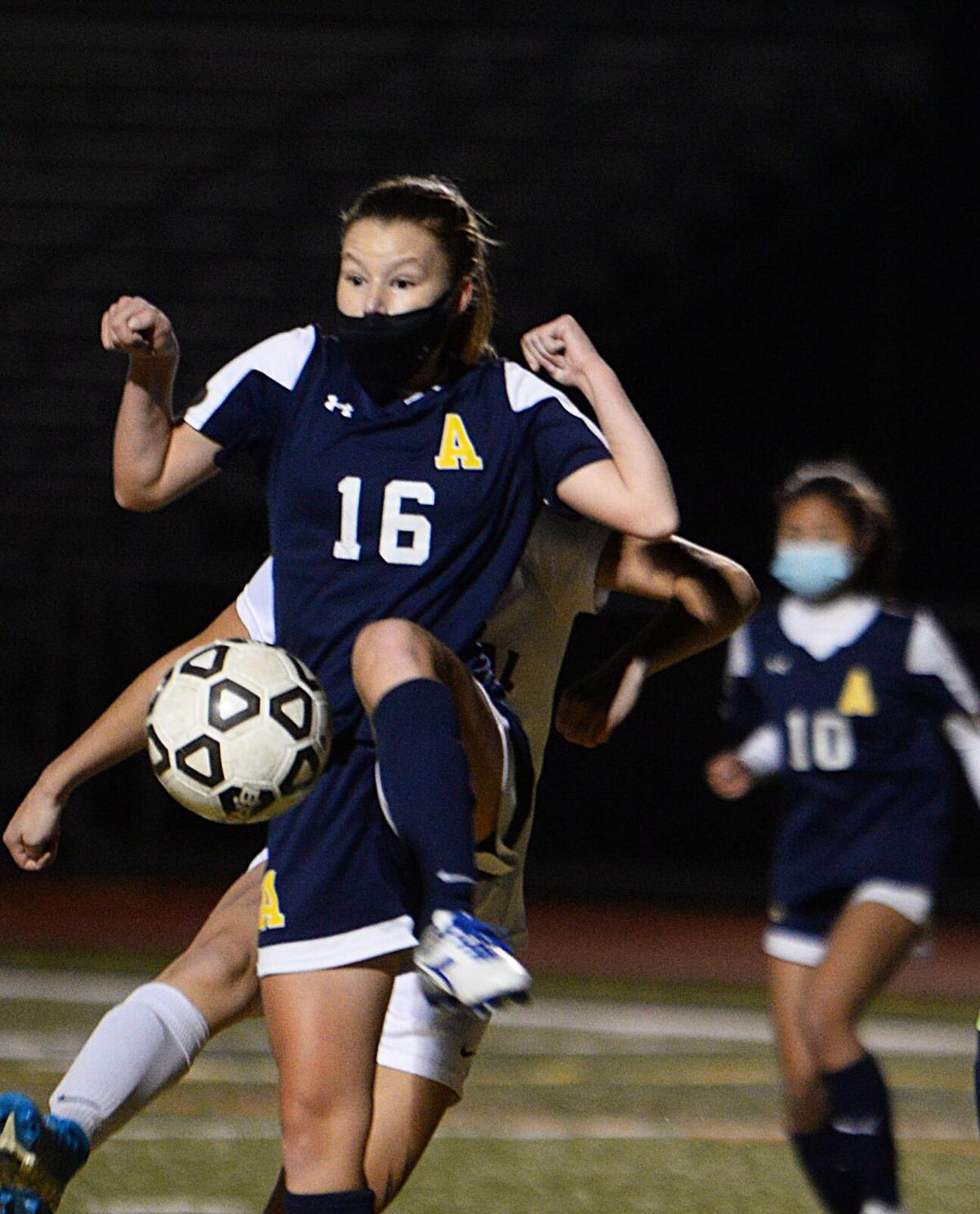 Andover’s Ashley Sheldon, here jumping to block a shot, led the Golden Warriors to a very strong season on the pitch.

Andover running back Lincoln Beal (carrying the ball) and QB Scotty Brown (handing off) both had huge fall seasons on the gridiron.

Andover’s Ashley Sheldon, here jumping to block a shot, led the Golden Warriors to a very strong season on the pitch.

The temperature has turned cold, warm coats are out, Thanksgiving is behind us and Christmas is on the horizon. With the winter high school sports preseason already underway, lets take a few moments to take one final look back at the fall sports season that just came to a close.

And what a fall it was for Andover High sports. The field hockey team dominated its way to another state title, swimmer Charlotte Moulson grabbed a pair of state titles and many other individuals shined on the fields, court and pool of the fall.

So, lets take a look at some of the best moments from the 2021 fall season for the Golden Warriors:

Many felt Andover field hockey would have won the 2020 Division 1 state championship, had the postseason not been cancelled by COVID-19. In 2021, the Golden Warriors left no doubt.

Andover was simply unbeatable this fall, on the way to the Division 1 field hockey state title. The Golden Warriors finished the season 21-0-1, outscoring opponents by a stunning 81-7 margin. They allowed more than one goal just once, the 2-2 tie with Masconomet in Game 2 of the season, and didn’t allow a single goal in the state tourney.

Leading the way for Andover was MVC Division 1 MVP Emma Reilly. The junior, who has already committed to Columbia, tallied 27 goals, including four in the Division 1 semifinals and the lone tally in the state title game. Haley Carver added 10 goals, Rose MacLean did it all, Abby Miller anchored the defense and goalie Adelaide Weeden earned 15 shutouts.

The legendary powerhouse Andover girls swim team may not have won the Division 1 state title this fall, but senior Charlotte Moulson won state crowns in both the 200 freestyle (1:54.83) and the 500 freestyle (5:07.93). The MVC Division 1 MVP also swam on the 400 freestyle relay that placed second.

There’s no wonder why college football programs are drooling over Andover junior star Lincoln Beal. The MVC Division 1 offensive Player of the Year carried 158 times for 945 yards and 13 touchdowns, caught 57 passes for 1,038 yards and 12 touchdowns and was one off the team-high with 76 tackles.

Mother and daughter Sue Kiley and Molly Kiley were a dynamic duo in cross country this fall. Molly, a junior, had a breakout season on her way to MVC Division 1 MVP. She won the MVC title (18:27), was third at the Division 1 state meet (18:29.6) and placed first in every dual meet.

The girls soccer team won the MVC Division 1 title, and advanced to the Division 1 Round of 16. Leading the way were All-MVC honorees Michaela Buckley (5 goals), defender Ashley Sheldon and midfielder Dylan Troy. Sophie Azzi scored the lone goal in a tourney win over Marshfield. Veteran coach Meghan Matson was MVC Division 1 Coach of the Year, as her team finished 12-5-3.

After an off year last fall, the Andover girls volleyball team was a contender again this year, going 14-7. Leading the way were All-MVC picks Ava Sipley, who averaged 28.1 assists per game, and Marissa Kobelski, who averaged 12.3 kills per game. Both regularity also led the team in other categories.

Leading the way for the golf team were Nick Ventura and Noah Farland.

Farland was fourth (76) and Ventura was fifth (77) at the MVC Open. Ventura tied for 13th (82) and Farland shot an 85 at the Division 1 Golf Championship. Ventura scored five dual meet wins, while Farland scores on.