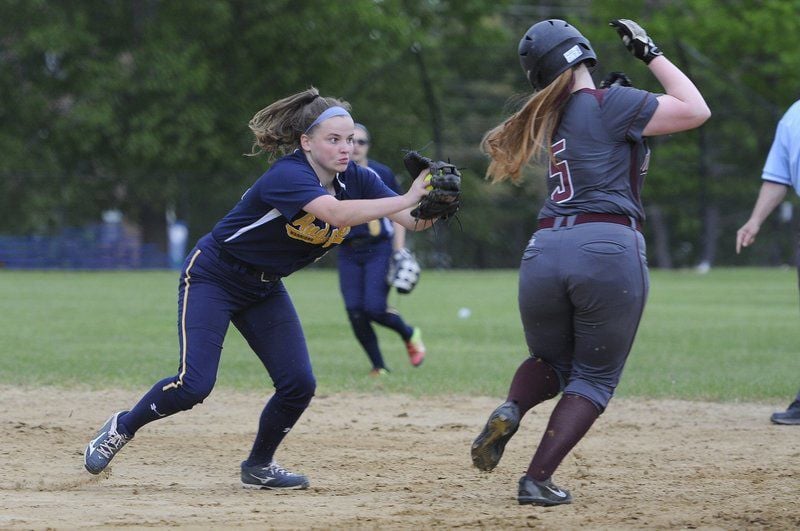 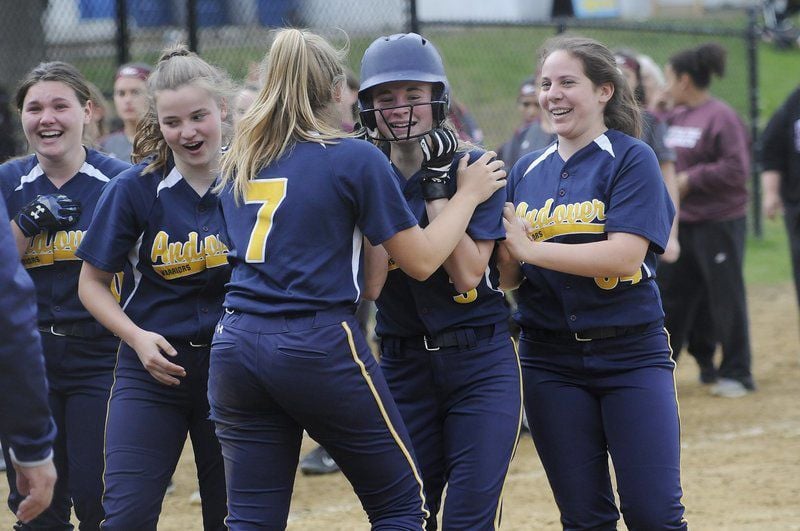 TIM JEAN/Staff photoAndover's Scarlett Gillette, center, is swarmed by her teammates after her walkoff RBI hit in the Golden Warriors' victory over Whittier last week.

TIM JEAN/Staff photoAndover's Scarlett Gillette, center, is swarmed by her teammates after her walkoff RBI hit in the Golden Warriors' victory over Whittier last week.

Andover senior Scarlet Gillette had conflicting emotions as she stepped to the plate in the bottom of the seventh in the Methuen Invitational opener on Friday against defending champion Whittier Tech.

“I was pretty nervous but I was also confident,” said Gillette. “It was a tough spot but I was thinking I had to get a hit. I was anxious.”

Gillette smashed a double to left-center to score pinch-runner Maggie Graw with the winning run, as the Warriors took a huge 3-2 walk-off victory.

Ashley Cocchiaro scored one run and drove in another and Sara Folen chipped in with an RBI.

Andover fell to Methuen 7-1 in the championship game of the Methuen Invitational on Saturday. Julianna Barbaro drove in Scarlett Gillette for the Warriors’ run.

Ashley Cocchiaro allowed three hits and one run over seven innings of work to lead Andover to a pivotal 5-1 win over North Andover last Monday. Paige Gillette led the Warrior offense with two RBIs and sister Scarlett Gillette added two hits of her own.

After struggles in the jumps, Andover freshman Jodi Parrott recovered to take second in the 110 hurdles in 14.80 at the EMass. Division 1 Meet on Saturday.

“She killed it in the hurdles,” said Comeau. “She struggled in the jumps, but the way she was able to come back from that and almost win the hurdles is amazing. I’m so proud of her. There aren’t many girls in the country that can run a sub-15 second 100 hurdles.”

“She had never pole vaulted until two months ago,” said Comeau. “And now she’s almost at 10 feet. To get 16 points from two freshman is great.”

Shane Lachance, Alex Pisacreta and Patrick McConnell all delivered two-run singles as Andover rolled over Wakefield 12-2 in the Genoulis Tournament. Josh Gruenberg continued to dazzle, allowing no earned runs in a complete-get effort.

Matt Potts was 3 for 4 with two RBIs and a run, but Andover lost to Lincoln-Sudbury 12-4 last Monday. Jason Denoncourt added an RBI and a run scored for the Golden Warriors.

Perennial MVC Division 1 champion Andover blanked North Andover, 5-0 on Friday, to finish the regular season at 14-1 and 12-0 in the MVC. Reilly O’Brien and Avi Jonarthanan won at first and second singles, respectively.

Sam Feng and Bryan Hun Htun rallied for a 1-6, 6-3, 6-1 victory at top doubles to lead Andover past Wellesley 4-1 last Tuesday, Justin Gu and Joe Colecchi teamed to win No. 2 doubles.

NH foe too much

Despite 25 kills for Troy Kennedy and 14 kills and 12 service points for Alex Durham, Andover lost to Haverhill 3-1 last Wednesday. George Truong chipped in with eight digs.