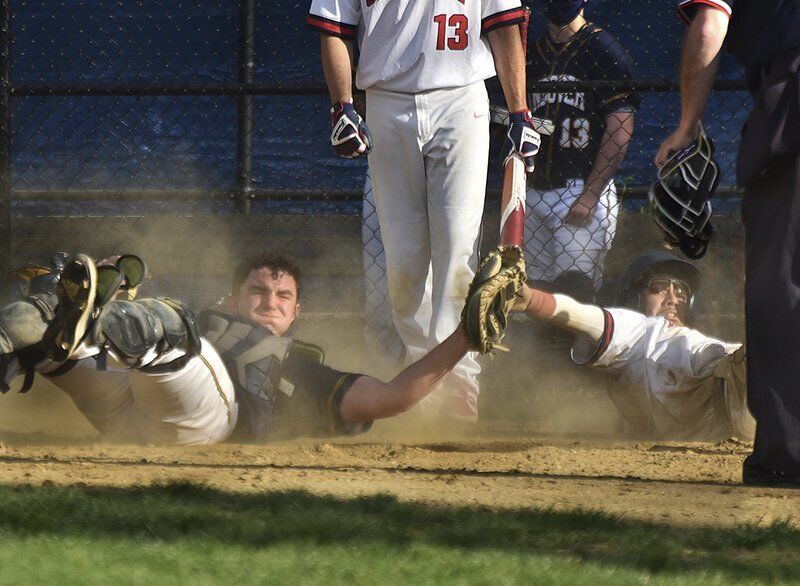 CARL RUSSO/staff photoAndover catcher Nolan Schirmer puts the tag on Central's Jeremy Delacruz as he dives for home plate. Schirmer starred defensively as a catcher, and at the plate this spring. 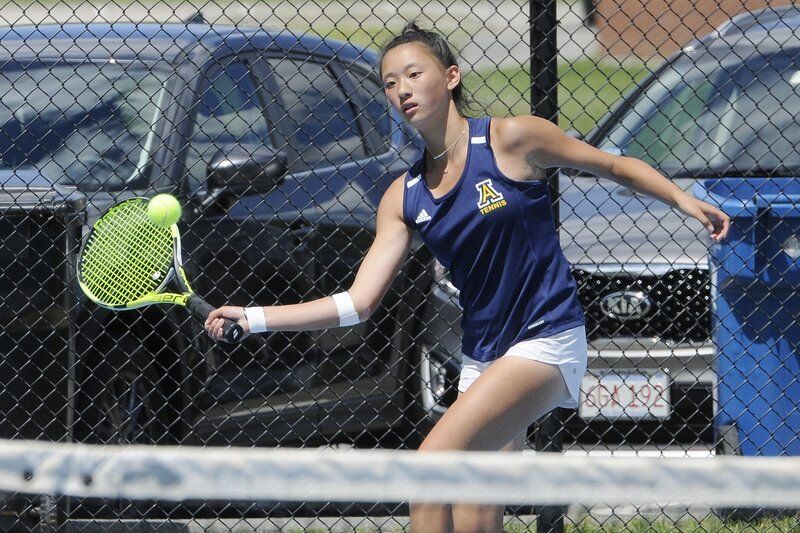 TIM JEAN/Staff photoAndover's Isabel Zhou won MVC Division 1 Player of the Year for the second time this spring, as the Golden Warriors' No. 1 singles player.

CARL RUSSO/staff photoAndover catcher Nolan Schirmer puts the tag on Central's Jeremy Delacruz as he dives for home plate. Schirmer starred defensively as a catcher, and at the plate this spring.

TIM JEAN/Staff photoAndover's Isabel Zhou won MVC Division 1 Player of the Year for the second time this spring, as the Golden Warriors' No. 1 singles player.

While athletics returned to the fields, courts, arenas and other venues of Andover High — in some form — in the fall, sports truly returned for the Golden Warriors in a more traditional, dramatic form in the season that just concluded.

This spring, for the first time in more than a year, the postseason returned.

After Massachusetts cancelled state tournaments in the fall, winter and fall 2 (late winter/early spring) due to COVID-19 concerns, the chance to play for a state championship returned in full form this past spring. And many Andover High teams took full advantage by delivering memorable tourney moments — a year after their entire postseason was called off due to the pandemic.

Whether it was in the playoffs or in the regular season, it was another memorable spring for the Golden Warriors. So, as we say goodbye to the 2020-21 school year, lets look back at the spring season.

After a year away from the diamond, thanks to the coronavirus, the Andover High baseball team returned with an unbreakable spirit this spring.

Four time this season, the Andover High baseball team was losing heading into the bottom of the seventh and final inning — only to rally back and earn a walk-off win. That includes wins over defending Super 8 champ North Andover and archrival Central Catholic. The Golden Warriors finished the season 12-5, with big playoff wins over Newton North and Lynn English, advancing to the Division 1 North semifinals.

Leading the way for the baseball team was All-Merrimack Valley Conference catcher Nolan Schirmer. The Boston College-bound backstop hit .429 with 21 RBIs while excelling behind the plate.

On the diamond across the campus, the Andover softball team was also delivering a memorable season. The Golden Warriors finished 11-7, advancing to the Division 1 North semifinals. That included a 3-2 state tourney upset of No. 3 Westford, then a 12-0 blowout of Lincoln-Sudbury.

Pacing Andover was All-Scholastic shortstop Paige Gillette. The the multi-sport star and infielder hit a team-high .489 and 20 runs scored while also excelling on defense.

As a sophomore in 2019, Andover’s Isabel Zhou was MVC Division 1 girls tennis Player of the Year. After a year away, Zhou once again took home MVC Division 1 MVP this spring. She earned 11 wins at No. 1 singles this spring, leading the powerhouse Golden Warriors (14-1) to a perfect regular season and a trip to the Division 1 North finals.

Jennie Wang added 10 wins at No. 2 singles and one at top singles, while Rachel Chen earned 14 wins between No. 2 and 3 singles. The doubles teams of Carol Yu and Eva McKone and Sona Chaudhary and Sonika Chaudhary also excelled.

On the boys tennis side, Reilly O’Brien took home MVC Division 1 MVP honors. He finished the spring with eight victories at top singles. The Golden Warriors finished 13-1 and went to the Division 1 North semifinals.

Jyles Amirault delivered an outstanding season for the boys volleyball team that finished the season 7-6 and was MVC Division 2 co-champs. Amirault was named MVC Division 2 Player of the Year, finishing the season with 264 kills (20.3 per match) and 28 aces.

Joining Amirault on the All-MVC team was Edward Lai (164 digs) and Owen Chanthaboun.

The Andover girls track team was led by a surprise performer this spring. Softball player-turned-javelin thrower Sara Folan was third at the Division 1 North meet, then was sixth at All-States.

The boys lacrosse team did not report stats consistently throughout the season, but midfielders Colin MacLean and Anton Pace were named All-MVC, while Logan Carr was named MVC boys lacrosse Sportsman of the Year.

Who knows what the Golden Warrior wrestling team could have done in the postseason, had the school not decided to opt out of the postseason due to COVID.